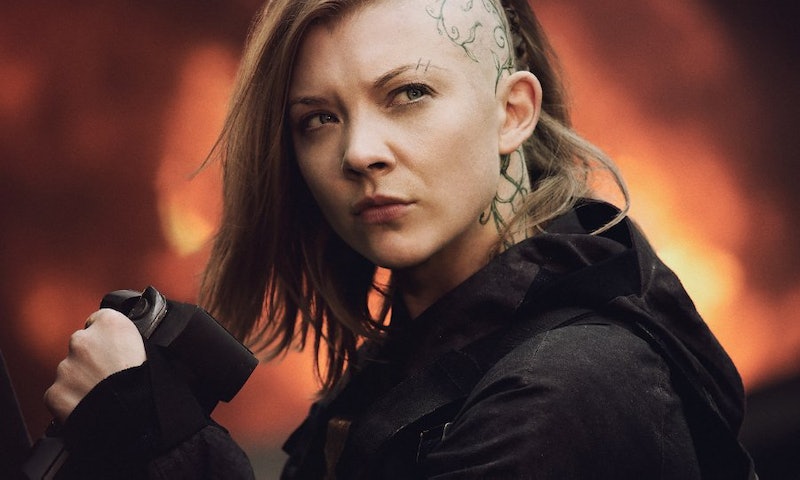 Accompanied by a film crew comprising Castor, the mute Pollux, and assistant Messalla, Natalie Dormer's Mockingjay character Cressida is tasked with a critical public-relations role. A film director from the Capitol, Cressida escaped with her team when they received word that the District 13 rebellion was brewing. Former Head Gamemaker Plutarch Heavensbee (Phillip Seymour Hoffman) charges the crew with filming Katniss at her most flattering as propaganda for District 13's cause against the Capitol, meant to rally Panem around the Mockingjay. But Katniss is also a magnet for danger — she manages to become embroiled in the Hunger Games not once, but twice, and then spark a worldwide rebellion against the cruel overlords in the Capitol. It puts Cressida in a risky position. So what happens to Cressida in Mockingjay ?

Major spoilers ahead, so proceed at your own risk. Natalie Dormer's character, with her shaved, tattooed scalp and trusty team by her side, is a truly empowered woman, and she's one of the few left standing at the end of the series. Though she's believed dead towards the end of the conflict with the Capitol, she emerges unscathed. (If only the same could be said for her loyal team.)

As Dormer noted in a recent Daily Beast interview, the role "could have easily been played by a man." It's not about creating roles that show off women who can fight or be one of the guys; it's about creating a role where the gender of the character is really extraneous to the kind of person she is. She doesn't just harness her femininity; she's more than what Hollywood dictates gender roles, even for so-called "strong women" should be. "Three-dimensional, complex women get an audience engaged as much as the men," she explained. With an undeniable sexual power, Dormer plays roles that put her on even footing with the men around her, scheming (Game of Thrones) and plotting (Mockingjay) with the best of them.

Cressida's first — and arguably most successful — spot comes with the bombing of District 8 that destroys a hospital and kills and maims many of the unarmed, civilian patients inside. Katniss visits the hospital, and Cressida films her response to the carnage. It's played several times across Panem, and it rallies surrounding districts to the cause. Cressida earns her keep almost immediately, when Districts 11 and 3 overwhelm the Capitol forces and seize control of their region. It provides a significant boost to the rebels and buoys them through subsequent missions.

She then directs footage in Districts 12 and 13, capturing a rare breach in Katniss's self-control when she bursts into tears at Peeta's torture and betrayal. In District 12, Katniss and Gale's home district, she obtains shots of Gale helping out survivors of a vicious Capitol attack and Katniss singing "The Hanging Tree," the song that rallied fans and sponsors around Katniss during the Games and in their aftermath. Each powerful image bears even stronger connotations, and Cressida ably wields her camera to create compelling propaganda.

Cressida works for Coin and Heavensbee to craft their desired images of Katniss as the Mockingjay, but she seems to support Katniss above all else. She escaped the Capitol for Katniss, she says. This is ultimately to her benefit, as it's Katniss who Panem hopes will lead it into a new era. Coin, on the other hand, plans to simply overturn President Snow's status quo.

There's one problem with Cressida's trips to the front lines alongside Katniss: She's not battle-trained. Katniss has years of experience hunting — and being hunted. But when she, the filmmakers, and Boggs come under attack while on a propaganda-filming voyage into the Capitol, Cressida and her team aren't entirely prepared. Katniss and Gale arm the propaganda team to defend themselves, but they're separated in the struggle. By the end of the spate of fighting, the Capitol has fallen, but Cressida and Pollux are feared lost. (Castor and Messalla died at the hands of the various Capitol defenses like the Mutts.)

But Cressida survives the attacks, and she goes on to document the reconstruction of the districts after the fall of the Capitol. The series doesn't dwell on her fate, focusing instead on the psychological aftermath on Katniss's side, but she does make it through the conflict.

The role is a respite for Dormer from the period dramas she's become accustomed to, demonstrating that strong roles exist for women in both the past and the imagined future. Cressida "challenge[s] people’s perceptions of me in the long skirt with the long brown hair," she told the Daily Beast in the same interview. "I want to keep people guessing."