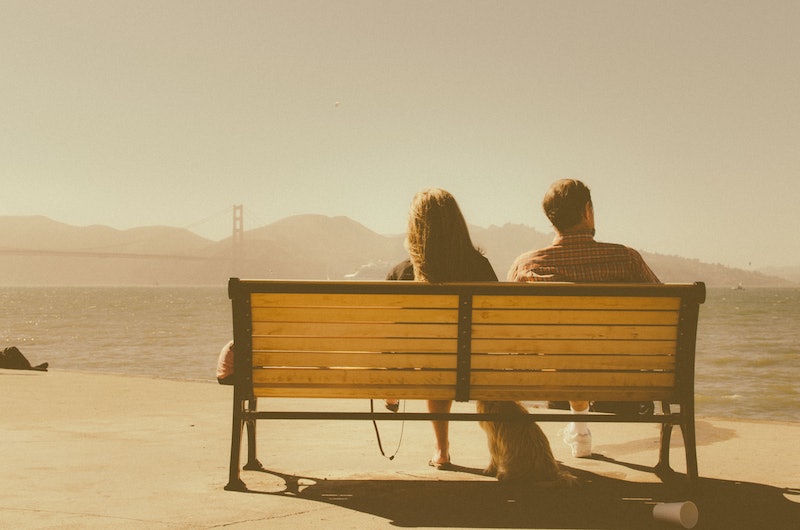 In general, I'm a proponent of being friends with an ex. I think as long as both of you have moved on and are emotionally ready to stay in each others lives in a platonic way, then it's a fantastically mature thing to do. In a lot of cases, you'll be forced into social situations with an ex, or at the very least they'll stay alive on your newsfeed, and agreeing to stay cordial with one another after a breakup can help spare both of you from awkward encounters and unwanted pain. Unless, of course, the friendship itself starts to actually cause unwanted pain.

I recently had to end a friendship with someone I dated. He and I were incredibly close for a long time, and I really thought we'd gotten the whole "being friends with an ex" thing figured out. When he got a new serious girlfriend, though, it became really complicated to continue the friendly relationship we'd shared for the last few years. In part, it was because I still had some unrequited feelings to figure out (which was news to me), but it was also because it just became too weird for both of us to understand where, exactly, I fit into the equation now that he'd fully moved on.

In a phone interview with Bustle, dating expert Susan Winter explained that if staying in contact with your ex creates anxiety or emotional turmoil, it's too much too soon and the friendship is actually doing you more harm than good. "If talking to your ex makes you feel weak, hopeless or insecure, don’t do it," advises Winter. "Bottom line: If being with your ex hurts, don't do it."

Here are ten other ways to tell if your friendship with your ex is actually hurting you.

Being friends with an ex immediately after the two of you breakup is, as much as I hate to say it, impossible. You need to give yourself time to sort through your emotions, and to separate your romantic feelings for the person from those that are still OK in a friendship. Winter suggests at least six months of time before any regular contact, because it allows enough time for you to see your ex as a person, rather than a lover.

2. You’re Doing It For The Wrong Reasons

3. You’re Using Friendship As A Ploy To Get Back Together

If you’re really ready to be friends with an ex, it means that your desire to actually date them has totally and completely passed. "If being with your ex sparks fantasies of ‘getting them back,’ don’t do it. If being a friend is a ploy to spend time with them, don’t do it,” says Winter. Don’t use friendship as a guise to try to convince your ex to be with you romantically – you’ll only end up hurting yourself.

4. One Of You Is More Invested Than The Other

As with any friendship — whether you’ve had sex with the person or not — if one of you is more invested in it than the other, it isn’t going to work. If you’re constantly the one texting, calling, or trying to make plans with them, and are getting no response, the two of you may have different expectations of the level of friendship you’re looking for.

5. The Boundaries Are Blurred

When you end a relationship and move into the realm of friendship, any and all sexual activity is off the table. "It doesn’t involve explicit discussions about sex, or include sexual flirting,” says Winter. If these boundaries are being pushed or disrespected, or it’s simply too hard to keep your hands off of each other, it may be time to reevaluate.

6. You’re Too Reliant On One Another

Deciding to be friends with an ex is more of an agreement to “play nice” than a suggestion to be #BFFs. “Being a friend with your ex doesn’t involve chatting on the phone all-night or gong out for drinks right after your breakup.” Your relationship ended for a reason, and once that’s happened your ex shouldn’t be your “person” anymore. You shouldn’t still be sharing your deep dark secrets with one another anymore — there needs to be a certain level of emotional distance in order for it to work.

7. You’re Preventing Each Other From Entering New Relationships

Depending on where you’re at in the “getting over each other process,” being friends with an ex may keep you from being open to meet new people – especially if you’re still holding out hope that the two of you will get back together. If your ex is still occupying the space in your life meant for a boyfriend or girlfriend — for example if he or she is the person you’re texting all day long or talking to on the phone at night — you should consider giving each other some space.

8. Your Significant Other Has a Problem With It

Friendships with exes tend to work best when both of you have moved onto new relationships, but if your friendship with your ex was very close (which, again, is not advisable), it becomes complicated for everyone when a new third party gets involved. If your significant other thinks you and your ex are too close, or the friendship is getting in the way of your relationship, it may not be worth it to continue holding on.

9. There’s Any Level of Jealousy

“If there’s jealousy, it means friendship is a guise for getting back together,” says Winter. If there are any leftover romantic feelings for an ex, seeing them with someone else can be heartbreaking and painful (trust me, I know.). If your ex has entered a new relationship and it evokes real feelings of envy, it may be time to cut off the friendship or at the very least put it on hold until you’re able to look at their moving on more objectively.

Plain and simple: You know your friendship with your ex is unhealthy if it causes you emotional pain. Spare yourself the extra heartache and cut it off completely.