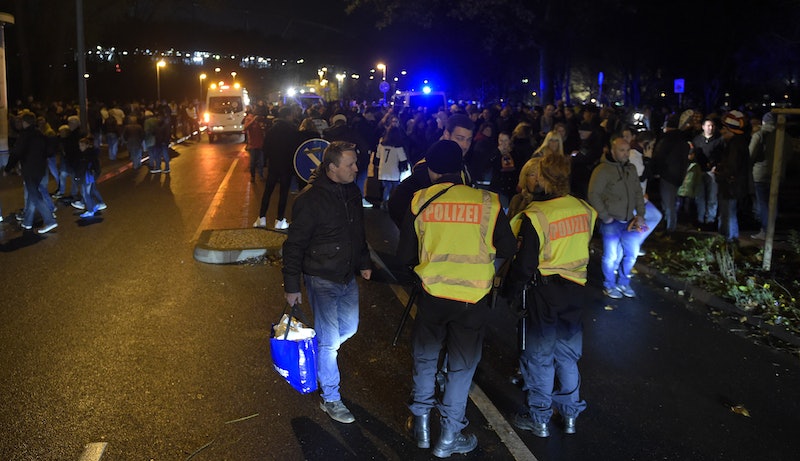 A friendly soccer match between Germany and the Netherlands planned for Tuesday evening has been canceled. The Hannover Stadium was evacuated, and visitors were asked to "calmly leave" the HDI-Arena on Tuesday. According to The Guardian, police found a "suspicious object" in the stadium. After the stadium was evacuated, the Hannover police chief announced that a bomb attack had been planned. A Dutch broadcaster confirmed that there was a "concrete threat" at the stadium.

Update: The German regional minister has said that no explosives have been found, despite many reports to the contrary.

Police ordered the evacuation before the match had started, though they didn't give stadium visitors a reason for the cancellation. News of the bomb threat was revealed after visitors were asked to leave. The police had asked the soccer fans to leave "quickly" and to "go without panic back home." Officers advised visitors to "go in small groups" for added safety. In addition to closing off the stadium, police stopped trains in the area. Philip Harmeling, a journalist covering the scene, tweeted that there had been a "serious plan of explosion in the stadium during the game."

Reuters notes that German Chancellor Angela Merkel, as well as other government leaders from Germany, had planned to attend the game to show solidarity with France, following Friday's deadly terrorist attacks in Paris. The coordinated suicide mission left at least 129 dead and hundreds more wounded, but there is no known connection between the bomb threat at the HDI-Arena and those tragic events. Two Dutch government ministers, Defense Minister Jeanine Hennes and Health and Sport Minister Edith Schippers, had also planned to attend the match.

Meanwhile, a friendly soccer match between England and France is still set to take place in London at Wembley Stadium Tuesday evening. London police have increased the security measures at the stadium and surrounding area ahead of the match. Reuters also explains that the German team had originally considered canceling Tuesday's match against the Netherlands following Friday's events in Paris. The German team had played against France on Friday, at the same time the Paris attacks took place. But the team had decided to continue with the match as planned to show solidarity with France, before the bomb threat forced police to cancel it.