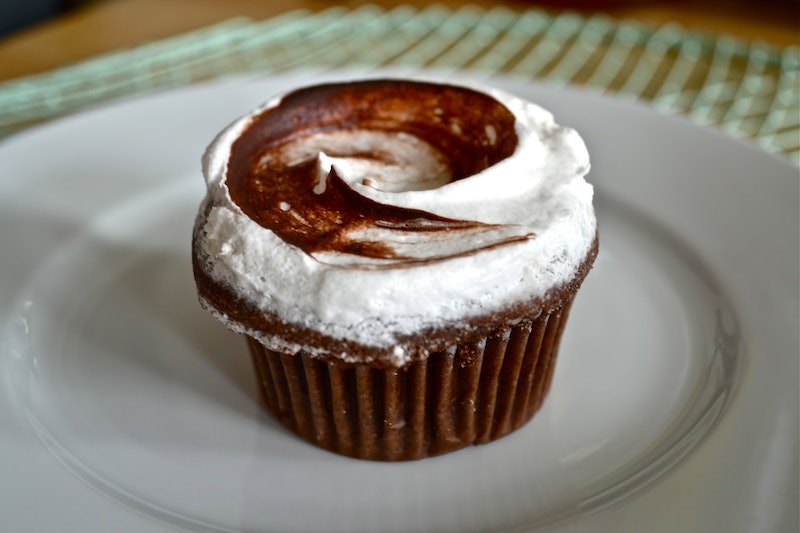 The sweetest day in December is here — Dec. 15 is National Cupcake Day, and there's no better way to celebrate than indulging in some beautiful baked goodness. This year, upgrade your baking game with seven hacks to take your cupcakes from regular to wow. Bid adieu to uninspired instant mixes and lackluster frosting. Instead, say hello to tasty tricks that promise to elevate your cupcake experience in ways you never imagined. To study up on cupcake trade secrets from one of the best, l met up with Sal LoBuglio, the owner and pastry chef of New York's Little Cupcake Bakeshop.

Stepping into the quaint 1940s-inspired bakery in NoLita is like walking into a black and white checkered retro reverie. Cake stands line the windows of the shop, advertising layer upon layer of delectable indulgence. Rows of darling cupcakes stare back at you through glass display cases, calling out to your inner sweet tooth with cute name cards like "Brooklyn Blackout" and "Dreaming Princess." Since its founding 10 years ago, Little Cupcake Bakeshop has become a celebrated New York staple. Tourists throng the shop for freshly baked pick-me-ups along food tours, and its coveted confections have made a splash alongside Gisele Bündchen in the pages of Harper's Bazaar.

In addition to its cultural prominence, Little Cupcake Bakeshop has been lauded for its efforts in sustainability and wholesome goodness. It's committed to green practices for its business and locally sourced ingredients free of shortening and preservatives for its baked goods. Delivering natural treats — with a surprising array of vegan and gluten-free options — hasn't meant compromising in flavor or deliciousness. Read on to see Sal's top tips for making his famous cupcakes so crave-worthy — from inspiration, to execution, to final touches.

1. Think outside the box

The first step to any great cupcake is coming up with what to bake. Rather than browsing grocery store aisles for the artificially flavored box mix that seems the least banal, think outside the box (pun intended) for what you're really craving. When you let your imagination — and hunger — drive your decision, you'll come up with decidedly more inventive concoctions that promise to please.

When brainstorming the latest additions for his bakeshop, Sal simply thinks about what he wants to eat that week. Lately he's been on a peanut butter fix, and experimenting with ways to integrate it into his baked goods for sweet synergistic results. Don't be limited by what's already been done. Incorporate your favorite flavors that typically lie outside the cupcake realm (I hear that Sal has been experimenting with bacon!).

When gathering your ingredients, buy natural and local as much as possible. It may come with a higher price tag, but in terms of health — and flavor — it will be well worth it. Little Cupcake Bakeshop is committed to using the freshest, most local, seasonal ingredients, and they attribute their knockout flavor to starting from the source. Sal suggests flours like Bob's Red Mill or King Arthur for gluten-free options that will taste just as good, if not better. Buying seasonally will ensure your ingredients are fresh and sustainable.

3. Swap out in inventive ways

Little Cupcake Bakeshop keeps everything natural by swapping out go-to cupcake ingredients with healthier alternatives that actually enhance sweetness and flavor. Sal recommends switching out sugar for brown sugar, or even using cinnamon shavings as a sweetener. Not only is cinnamon better for you than any artificial sweetener, the spice adds an extra subtle kick to take your cupcakes beyond. Other options? Apple sauce or banana. The right amount won't change the flavor of the cupcake, but will provide the perfect amount of natural sweetness. The bakeshop uses vegan butter and almond milk for its recipes. A couple bites of the shop's Cookies 'n' Cream cake proves that going vegan doesn't mean it has to "taste vegan." Last but not least, Sal insists on always using pure vanilla bean, never alternatives, and says it's what really brings to cupcakes that full dimension of flavor.

4. Keep in mind it's a science

As inventive as many of the Little Cupcake Bakeshop's concoctions are, Sal admits there's "a real science to it." While you can get as creative as you want with flavors and add-ons, remember that baking is chemistry. Before putting anything in the oven, Sal always mixes dries with dries and liquids with liquids. This takes the headache out of some of the prep, and ensures a smoother blend.

Once everything is baked, the final touches can be what separates the results from nice to next-level. Little Cupcake Bakeshop is known for its over-the-top cupcakes with frosting just as tall as the cake itself. How do you achieve frosting so smooth and creamy that this skyward perfection is possible? Sal suggests adding extra milk to the buttercream. This will provide for a silky smooth texture, making it easier to ice, and easier to decorate.

6. Sprinkle the cupcake with cupcake

For the ultimate way to top off your creation, look no further than the cupcake itself. Sal admits that one of the best ways to top off a cupcake is with pieces of that cupcake that have been put back in the oven, burnt, then ground up in a food processor. How mouthwateringly meta.

If you're being risky and inventive, chances are you're not going to find perfection on your first go — but the results will still be delicious. When concocting a new cupcake, Sal advises to not be afraid to make mistakes. It's through practice and trial that you'll determine what works and what doesn't, and you'll have fun eating your errors along the way!

For more amazing food ideas, check out Bustle on YouTube.