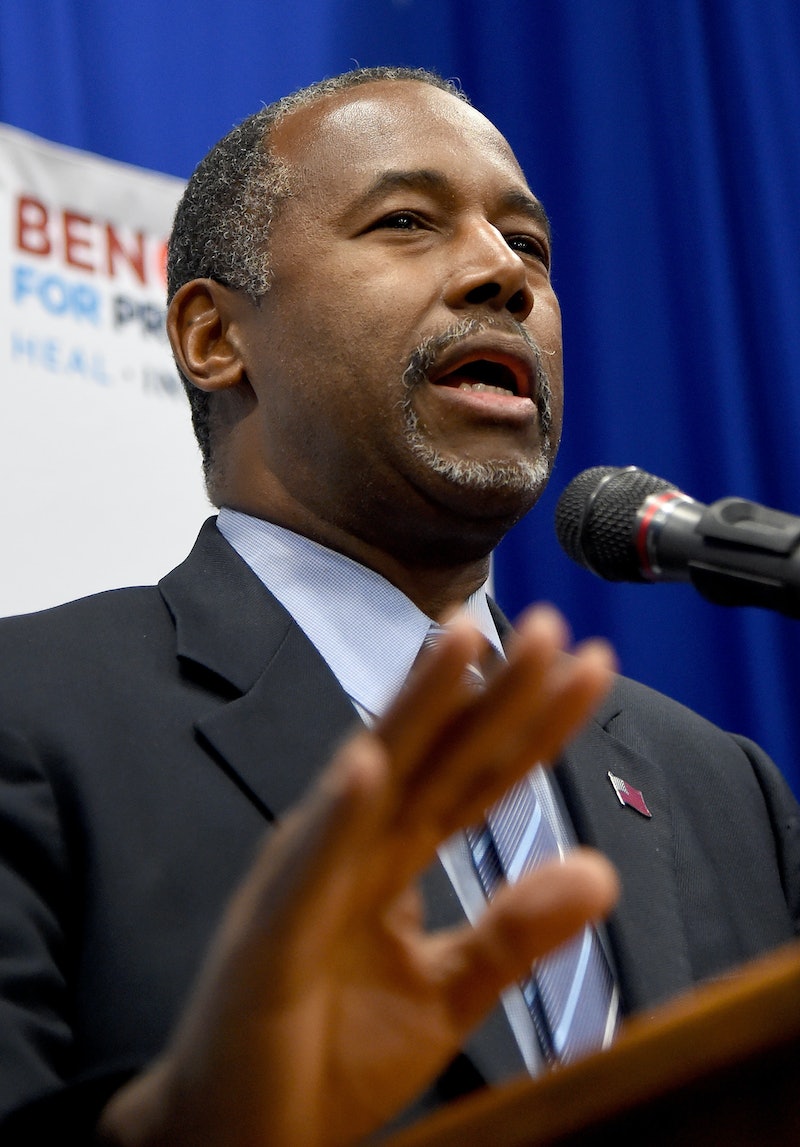 Right now, the top of the Republican Party's primary polls are, to put it kindly, a colossal mess. On the one hand, you've got boorish billionaire businessman and rage-tweeter Donald Trump, and on the other, you've got Dr. Ben Carson, a once-brilliant neurosurgeon who's now a sleepy-eyed, foreign-policy-challenged presidential contender. And according to an article in The New York Times Tuesday, people inside Carson's own campaign are vividly aware of just how far behind his international knowledge is. Here we have four awkward quotes about Carson's foreign policy struggles.

Two people were prominently quoted in the article, written by Trip Gabriel: former CIA officer Duane Clarridge, who's now a chief adviser to Carson on matters of terrorism and foreign policy, and Carson's longtime friend, conservative radio and TV host Armstrong Williams. Williams isn't officially affiliated with Carson's campaign — as The Daily Beast detailed back in September, he claims to have not benefitted monetarily from it in any way — but he has put in a great deal of work promoting his friend's candidacy. In both cases, however, it's hard to argue that Carson's campaign is helped by these kind of sentiments going to press. Quite the contrary, they make his prospects look even dimmer. Here are the four quotes that really stung.

Just days after the series of terrorist attacks in Paris which left 129 people dead, Carson suffered a particularly bad appearance on Fox News Sunday. He was seemingly unable to name a single foreign nation or head of state that he'd contact in the hopes of building a coalition to combat ISIS. He also claimed that "the Chinese are there," in reference to Syria. It was after this, Clarridge told Gabriel, that he placed a rather exasperated phone call to Williams, lamenting that nothing they worked on with Carson seemed to stick.

We need to have a conference call once a week where his guys roll out the subjects they think will be out there, and we can make him smart.

Months ago, Williams mounted a vociferous defense of Carson after the candidate's much-maligned statement that he wouldn't select a Muslim for his cabinet. But he's now willing to offer some at least tempered words of honesty about Carson's struggles when he's been put on the spot. Here's how Williams explained that ill-fated Fox News Sunday interview:

He’s been briefed on it so many times. I guess he just froze ... Sometimes he overthinks things.

3. "A Database With Which He Is Very Unfamiliar"

One of the quotes in the Times article is from someone entirely unrelated to Carson's campaign, but it's nonetheless a cautionary assessment from a very relevant source. On the morning of Nov. 13, just hours before the Paris attacks began, former CIA director Michael Hayden described Carson on MSNBC's Morning Joe:

I must admit, I had one lengthy phone call with Dr. Carson about two months ago. His instincts are all right. But this is a database with which he is very unfamiliar.

Maybe the most awkward quote was saved for last. It came right at the end of Gabriel's article, and it's sort of a double-fault. Clarridge both disputed Carson's remark about Chinese activity within Syria and apparently used a derogatory term in the process:

“The jump from Erbil and Soviets” to the Chinese “in Damascus is a long leap,” Mr. Clarridge said, using an ethnic slur for the Chinese.

Protip for any future campaign advisers out there: If you're already making things awkward by going on the record about your own candidate's failings, do try to avoid sprinkling in any racial slurs.