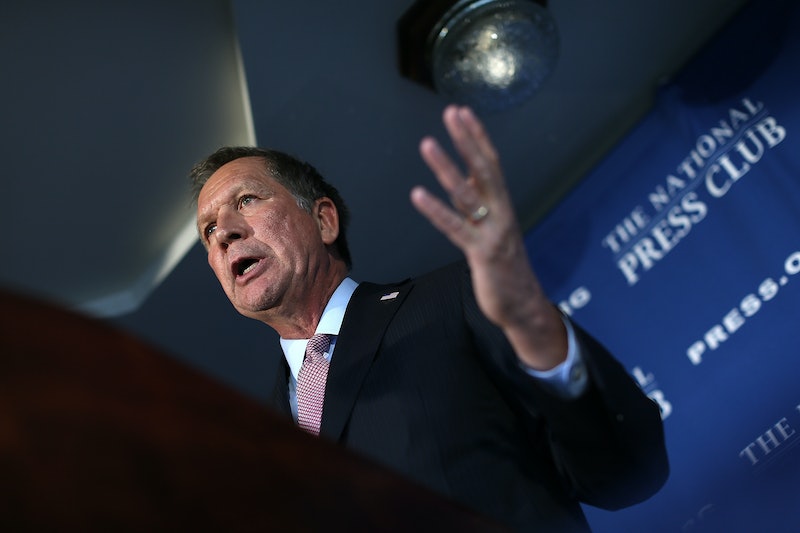 Up until now, experience has been viewed as a negative factor in the 2016 Republican primary. Voters have looked toward non-establishment candidates, seeking a change. But in the aftermath of attacks on Paris last week, experience suddenly isn't looking too bad. And that's probably why John Kasich's campaign is picking up speed and seeking to lead the conversation.

Of all the candidates running, Kasich is one of the most qualified when it comes to foreign policy. Before his two terms as the governor of Ohio, he served on the House Armed Services Committee for 18 years. During that time, he was mostly focused on the budgetary side of things, but it's still a considerably larger amount of foreign policy experience than what, say, Donald Trump has.

Since the attacks, Kasich has been looking to prove that he has not only experience but also a crucial understanding of the subject. On Saturday, his campaign released a detailed policy plan, which not only included information on how Kasich would act in the aftermath of such an attack, but also encouraged Obama to take such action.

On Tuesday, Kasich reiterated many of these points in a speech at the National Press Club. During the speech, which was heavily focused on foreign policy, Kasich made a number of suggestions, such as establishing safe havens on the Syrian borders for refugees and enforcing no-fly zones over them, increasing military presence, and invoking Article 5 of the NATO treaty, which says that an act of war against one nation is an attack against all its allies as well.

Kasich also advocated for further support of Kurdish fighters. "The Kurds, who are fighting to defend their homeland, fight like tigers, and they are one of the few groups friendly to the United States who really have shown that they know how to take the fight to ISIS. We must arm them much more … generously than we have done so far."

In addition, Kasich joined the ranks of governors calling for Obama and Congress to stop providing refuge for Syrian immigrants, at least temporarily. Despite previously supporting refugee efforts, Kasich changed his opinion following the Paris attacks, citing public sentiment as the root of his concern. "You need to lead, but you also have to be sensitive to what people think," he said.

Regardless of how voters may feel about Kasich's politics or suggestions, they may appreciate the fact that the governor does have some fluency in foreign policy. And that goes a long way, considering the reactions of other Republican candidates. Trump's proposed solution to combating ISIS is to take away their oil and "bomb the shit" out of them, while Ben Carson isn't even sure what he'd do.

Kasich, or at least someone on his campaign, knows that this is an area where he could pull ahead. On Tuesday, the campaign released a new ad further highlighting his foreign policy chops and encouraging voters to consider someone with experience. But although foreign policy alone won't win the 2016 nomination, it could give Kasich a fighting chance to come back up.