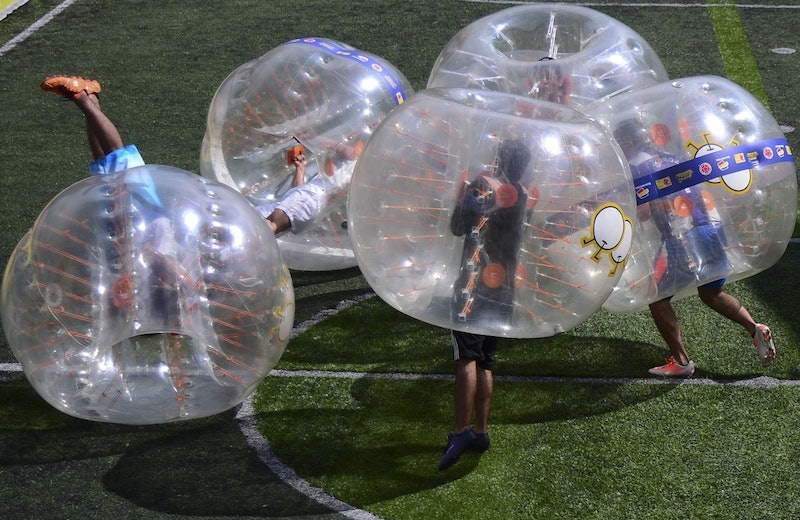 Have you been dying to jump inside a giant inflatable ball ever since the National Association of Bubble Soccer appeared on Shark Tank ? Even if you'd never heard of bubble soccer before the episode? That's certainly how I've been feeling, because the sport is every bit as fantastically ridiculous as it sounds. It involves people (adults and children both!) wearing full-on bubble suits, running at each other full force like human bumper cars, bouncing, rolling, and generally creating havoc — all while, of course, playing soccer. Now, does it get any cooler than that?

It's certainly not hard to understand the traction bubble soccer's managed to accrue since its inception. What started off as a gameshow gimmick all the way in Norway (which totally makes sense, can't you see Jimmy Fallon forcing celebs to duel with him in one-on-one soccer whilst wearing oversized bubble suits?) quickly spread across Europe, and now the National Association of Bubble Soccer has officially brought the sport stateside. According to their website, bubble soccer has already been getting play all over the country, in every major city from New York City to Dallas Fort Worth.

The National Association of Bubble Soccer, which was founded just over a year ago, is currently helmed by commissioner John Anthony Radosta, and they basically exist to promote the proliferation of the sport. In other words, their website acts as a hub for bubble soccer enthusiasts. The National Association of Bubble Soccer does everything from selling starter sets (after all, you can't play bubble soccer without first getting your hands on some oversized bubbles), to renting equipment, to connecting players with bubble soccer leagues in their respective areas. It's a great resource for anyone looking to get into the game.

So, does bubble soccer has what it takes to become a true national phenomenon? As Radosta said of the sport to the Sun Sentinel, "It has that 'wow' factor. It's fun and entertaining." Sounds like my kind of game.