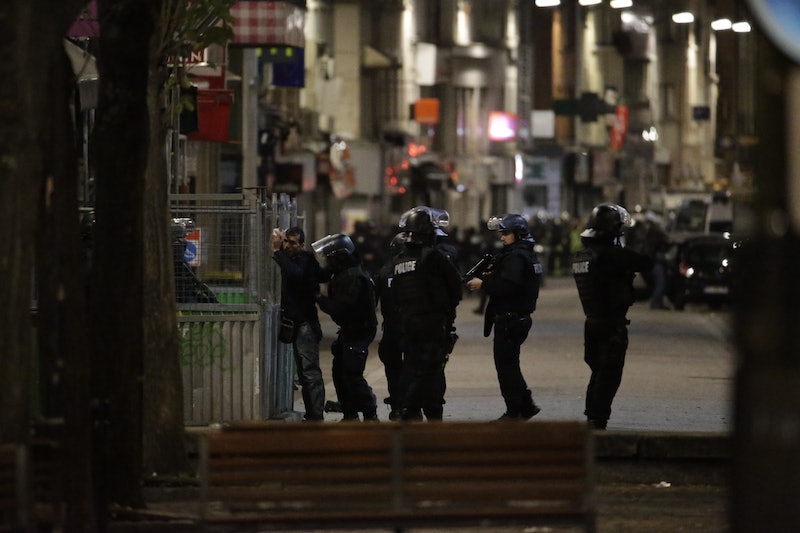 Update: After seven hours, the Saint-Denis police raid ended Wednesday with two suspected terrorists dead, including a woman who died after detonating her suicide vest, according to officials. A total of seven people were arrested, three of whom were inside the apartment during the raid. It was not immediately clear whether the target of the raid, Abdelhamid Abaaoud, suspected mastermind of the Paris attacks that killed at least 129 people and wounded more than 350 others, was among those killed or arrested.

Earlier: A police raid has been reported in a prominent Parisian suburb early Wednesday morning. The police raid in Saint-Denis erupted in gunfire, according to residents and eyewitness reports. The shootout was reported around 4:30 a.m. in the early hours and were carried out by the French national police's elite RAID division (Recherche Assistance Intervention Dissuasion) as they allegedly sought suspected gunman Salah Abdeslam and possibly a ninth suspect involved in a series of terrorist attacks in the city that occurred on Friday. A police officer told the AFP that the raid was indeed intended to target Abdelhamid Abaaoud, the alleged mastermind of the attacks.

It has also been confirmed by authorities to French newspaper Le Monde that one person is dead, while two officers have been injured. Emergency medical personnel had previously been deployed as well. There was a brief pause in the police raid before more shots were reported at around 5 a.m. A helicopter is also reportedly hovering the area as well as military vehicles and personnel. There are currently reports that citizens are being told to stay indoors and that streets are being blocked off, in addition to public transit being halted to the area altogether.

Already, those who are currently in Saint-Denis are taking to social media to share their experiences and provide a direct look at what is currently unfolding on the ground. The suburb has found itself in the middle of the recent Paris terrorist attacks, as the Stade de France is also located there. That venue fell victim to some of the aforementioned terrorist attacks, with three suicide bombers attempting to infiltrate the stadium and injure civilians.

The situation has only become more tense, as there were reports of up to three gunmen exchanging fire with officers after having barricaded themselves in an apartment in the neighborhood. Schools in Saint-Denis are now closed until Wednesday. A resident of the neighborhood spoke with Le Monde about what she saw unfolding at around 4:10 a.m., describing an alarming scene that has shaken her family:

There have been bursts of automatic weapons discharging and sniper fire. From our window we could see lights like fire or grenades had been lit or launched. Then the helicopters shined its spotlight on our roofs. We are afraid and have turned on our own lights so our children are less alarmed.

A series of explosions have been reported in the early morning. As of this writing, the raid has lasted well over three hours.