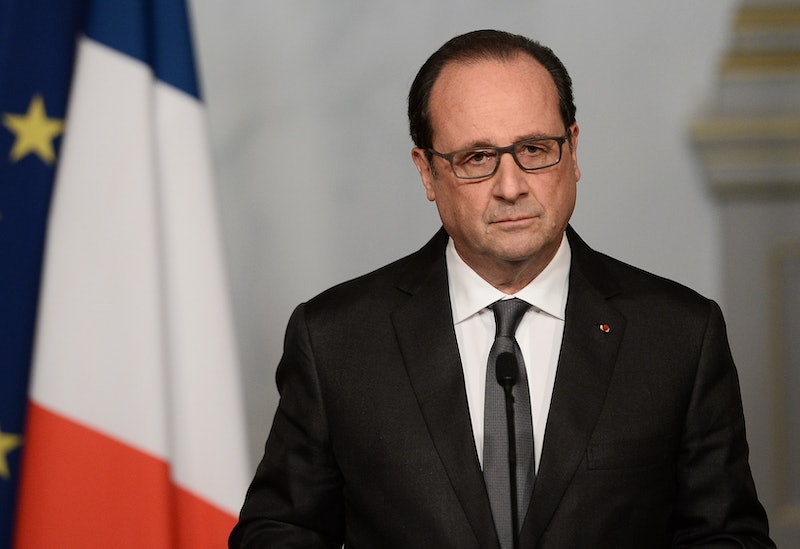 A seven hour siege on a Paris suburb apartment dominated headlines Wednesday, resulting in two terrorists killed and seven others arrested in a police raid marked with explosions and gunfire. The Saint-Denis raid began at around 4:30 a.m. and continued well into the morning. Authorities were tipped off that Abdelhamid Abaaoud, the suspected brain behind last Friday's horrific attacks in Paris, might have been at one of two apartments in the suburb. On Wednesday afternoon, French President Francois Hollande addressed the Saint-Denis raid, which aimed to "neutralize terrorists."

Hollande's remarks, translated from French, confirmed that the raid targeted terrorists that were connected with the attacks that killed at least 129 people and wounded more than 350 others. "These actions confirm to us once again that we are at war, a war against a terrorism which itself has decided to launch war against us," Hollande said in front of an assembly of the country's mayors. The president also called for an international coalition to come together to stand up to the terrorist group.

Cell phones found near the bodies of Friday's attackers contained information that led authorities to believe Abaaoud might have been at the Saint-Denis apartment. Inside the apartment, there were explosives and firepower that indicated a second plot might have been in place. Two terrorists were killed, including a woman who blew herself up after reportedly detonating a suicide vest at the beginning of the raid. Three people were arrested, along with two others found amidst rubble and the apartment's landlord and a female acquaintance.

Hollande maintained France's commitment to continue its airstrikes in Syria and said he would ask to extend France's state of emergency for three months. "It is the entire country that has been attacked," Hollande said, adding that ISIS is "threatening the whole world."