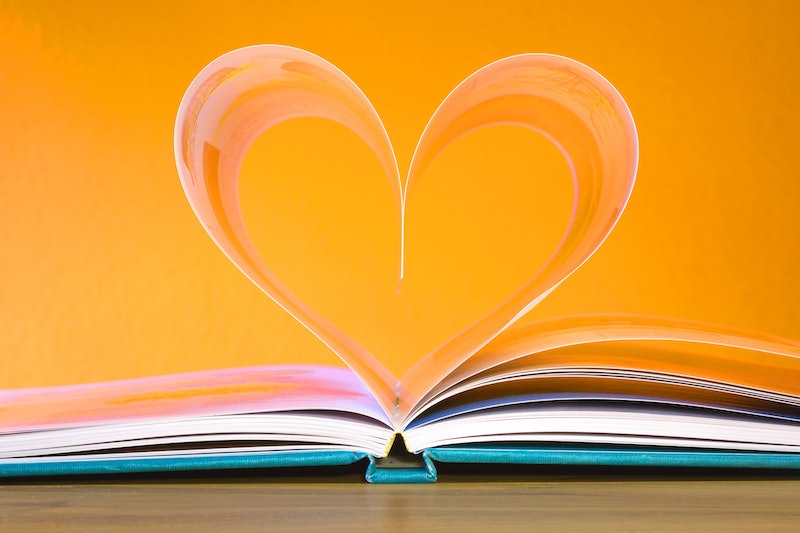 This year is almost over (even if we can't believe it) and that means one super exciting thing. No, it's not all the New Year's Eve champagne on the horizon, or the inevitable hangover, it's that we are about to begin a brand new year and finally get a peek at 2016's most anticipated YA novels. There's nothing quite like turning the page on a calendar and starting fresh with a whole bunch of new books to read.

Sure, 2015 was a top-notch year for new young adult novels, but we book nerds get a whole new batch of exciting books on the horizon. And there's one great place to start talking about them: the sequels and series additions that we are dying for. Because this entire list could be these books, I'll call them out specifically before we delve in. In 2016, we get these additions to popular YA series, and these are only the ones that already have publication dates, so it's just the start:

Whew. We could stop right there and still be stoked, but there is so much more. These 18 books, releasing between January and April are some of the most anticipated YA novels of the new year.

When you jump into Alexandra Bracken's world, violin prodigy Etta time-travels from a concert in New York City to a ship at sea, where she is a prisoner in 1776. She's a legacy from a group of families who can travel through time, and who do so in a power struggle among each other. She soon learns that her mother has hidden a secret object somewhere in the world, and in time, and she must retrieve it. This pits her either against or alongside the captain of the ship, Nicholas, a former slave, who also has this power. The book (clearly!) has adventure and plenty of romance, and luckily for we captivated readers, it's only the first in a new series.

2. This Is Where It Ends by Marieke Nijkamp (Jan. 5; Sourcebooks Fire)

We have tragically seen these events played out in headlines and on the news, and so Marieke Nijkamp's brutal, powerful fictional account of a school shooting is important in its timeliness. This Is Where It Ends digs deep into one of these tragedies by telling the story minute by minute over the course of 54 minutes, forcing the reader to feel like one of the hostages in the school being terrorized. Maybe it's this kind of book that can push people to think on a more human level about the horror of these events and how we can prevent them in the future.

Fantasy lovers (and fans of just plain epic stories) are positively falling over ourselves eager for Something Strange and Deadly author Susan Dennard's new series, starting with Truthwitch. I'm here to tell you it doesn't disappoint, at all. Truthwitch is an epic, action-packed adventure starring BFFs Safiya and Iseult. Safi is the titular Truthwitch, able to tell whenever someone is telling a lie. Iseult is able to see people's emotions as colors. And this book has EVERYTHING: running from the law, kickass ladies, magic, swordfights, pirates, and so much more.

You definitely know about the Titanic (or, maybe watch the movie every Saturday afternoon it airs) but did you learn about the WWII-era sinking of the Wilhelm Gustloff? I didn't even know until picking up Ruta Sepetys' Salt to the Sea that the latter is actually the greatest maritime disaster in history, bigger than the Titanic. This historical fiction novel tells this often-overlooked true story from four points of view, as three war refugees from different homelands find their way to salvation in the form of the former cruise ship the Wilhelm Gutloff. When a Russian torpedo hits the ship, the characters, sometimes from warring homes, find that they must unite to survive.

5. Stars Above and Heartless by Marissa Meyer (Feb. 6; Feiwel & Friends)

Alright, fine. I cheated a little. Stars Above is a collection of stories (including five new ones) set in the Lunar Chronicles universe, and it is just the start of two awesome books coming from Marissa Meyer this year. Though it's not coming until November 8, Heartless is Meyer's next fairy-tale retelling, this time the villainous Queen of Hearts, back when she was just Catherine, a lovesick girl in Wonderland. More Marissa Meyer forever please.

Blackhearts is a prequel of sorts, telling Nicole Castrolman's version of the origin story of the infamous pirate Blackbeard. Before he was the ultimate villain, Edward "Teach" Drummond was just an extremely wealthy sea merchant who fell for a penniless orphan Anne Barrett, who entered Edward's family as a maid. Their forbidden affair was fueled by both of their desires for independence, freedom, and adventure, but things set on a certain course for the soon-to-be Blackbeard when Anne breaks his heart.

7. The Girl from Everywhere by Heidi Heilig (Feb. 16; Greenwillow Books)

Nix was born in the Chinatown section of Honolulu in 1868, but she spent her life with her father on his time-traveling ship The Temptation to modern-day New York and even imaginary destinations like mythical Scandinavia. However, Nix questions her father's plan to time travel back to Honolulu to the time before Nix's mom died during childbirth, with Nix, threatening her entire existence. Heidi Heilig's The Girl from Everywhere is a super fun, full-throttle adventure story that pulls legend and mythology together with fantasy, sci-fi, and a family drama.

(Sidebar: Note the awesome cover art, which now has me convinced that ships on the high seas is the current cool theme of 2016 YA.)

Claire Needell's debut novel is about the aftermath of a sexual assault, but it's also about three broken sisters and how they're able (or not able) to find their way back to each other. Melanie, Erika, and Jan's parents just got divorced, and they're feeling left behind by their mother and father's new life plans. Then, Jan heads off to college, and Erika and Melanie head to a party, where Erika finds Melanie unconscious and half-dressed. It's a tough one to read, but it's so unpredictable, and you might think you know where it's going but you don't.

You probably are already obsessed with Melissa Marr from her Wicked Lovely series, so prepare to be stoked: Marr returns to her fae world in Seven Black Diamonds. This time we follow theLilywhite Abernathy, a half-human, half-fae living as a criminal in the middle of a long-running war between faeries and humans. The Black Diamonds are a set of faery spies, embedding themselves within the human world, aiming to destroy it from the inside. And Lily finds herself trapped into joining them.

Readers who paid close attention in their high school English classes are probably already ahead of me on this one, because the title A Steep and Thorny Way is a quotation from Shakespeare's Hamlet. So yes, Cat Winter's latest YA novel is a creative re-telling of the Bard's play. But this isn't like the Shakespeare you know. Biracial Hanalee Denney, born to a white woman and African-American man, is an outcast in 1920s Oregon, and because her parents' marriage isn't legally recognized, she has no rights under the law. But when Hannalee starts to hear that her father wasn't killed by a drunk driver, as she thought, she begins to suspect her new stepfather. And Shakespeare lovers can sense some of the ghostly wildness coming next.

It's the Summer of Sam, 1977 New York City, and teenager Nora Lopez is trapped in the middle of her own life struggles. Yaqui Delgado Wants to Kick Your Ass' Med Medina brings the infamous summer alive — the summer of arson, blackouts, and the notorious serial killer Son of Sam — to tell a heart-pumping coming-of-age story like only she can. The book feels alive, and you can feel the rising tension and rising temperatures from the comfort of your home.

A new series by Cassandra Clare? Sign us all up. Oh, it's also a Shadowhunters series? Double yes. Five years have passed since the events of The Moral Instruments series, and Emma Carstairs is devoting her life to finding whomever killed her parents and exacting her revenge. So when a series of murders hit Los Angeles that look a whole lot like what happened to her parents, Emma turns to investigate.

Author E.K. Johnston is nearly a perennial nom for major YA book awards, but I think Exit, Pursued by a Bear will be her most popular yet. Hermione Winters is the star cheerleader at a school when students and locals go to the football games only to see the top cheerleading squad. But she ends up a pariah among classmates when she's drugged and raped at a party and gets pregnant. The story follows how sexual assault and the repercussions of it can reverberate through one person and an entire town. It's unflinching and powerful, and completely necessary.

Three years ago, Eden was raped by her brother's best friend, but he threatened her never to disclose to anyone. The Way I Used to Be meditates on what living as a rape survivor is like, and how it can change who you are into the future. Eden springs between anger and darkness and "reinvention," trying to change the way she acts and dresses to move forward. Eden doesn't want to be a victim, but Amber Smith's story shows that even women who are brave and strong can suffer under the emotional weight.

I'm totally stoked for Five, Six, Seven, Nate! Author Tim Federle's YA debut The Great American Whatever. Quinn Roberts has been withdrawn ever since the death of his beloved sister and movie-making partner Annabeth. But when Quinn's best friend drags him to a college party, Quinn crushes hard on Amir. Readers get to simultaneously read Quinn's real life adventures and his "scripted" events, of what he would imagine would happen to him if his life was a movie. You'll be absolutely psyched to spend hundreds of pages with the witty, sarcastic Quinn.

Lucky U.K. readers already got a chance to read Louise O'Neill's Asking For It, her follow-up to her feminist must-read Only Ever Yours. (In fact, the cover above is the already released U.K. version.) U.S. readers can catch up come April with this powerful story. 18-year-old Emma doesn't remember the party last night, but from the whispers and pointing and pictures at school, she puts the pieces together that she was sexually assaulted. With O'Neill's story told in first person, it becomes even more raw and brutal, and it's a must-read that address today's climate of rape culture.

17. When We Collided by Emery Lord (Apr 6; Bloomsbury Children's)

Emery Lord made us all fall in love with her debut novel Open Road Summer and her follow-up The Start of Me and You, so it's a no-brainer that we can't wait for When We Collided. Two very different, and both flawed, teenagers, Vivi and Jonah, try to navigate first love, and readers will be crying and laughing chapter by chapter. Jonah is feeling buried under the weight of responsibility for his family as his mother falls into depression, and Vivi is the new girl in town who approaches life with smiles and rainbows, looking to live each moment fully. When they ... well, collide, things don't go as easily as it may seem.

Mariko Tamaki is part of the team behind This One Summer, one of my favorite graphic novels of late, so you'll have to race me to the counter to buy Saving Montgomery Sole. Montgomery Sole is a 16-year-old outcast, due to her two mothers and her town's homophobia. But her two BFFs Thomas and Naoki join her to create The Mystery Club, aimed at investigating paranormal activity. Instead, the club helps them investigate the quite normal activity of teenagehood and growing up.