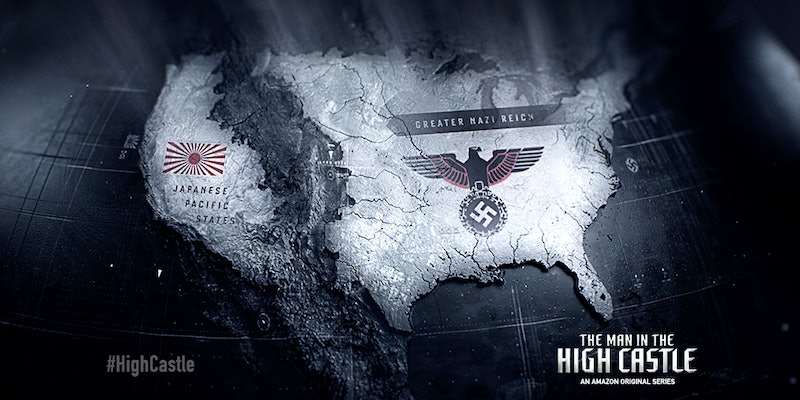 Some things in history are a inarguably givens, and one of the most obvious ones is that the Allied Powers won World War II. But...what if they didn't? That's the premise undertaken by The Man in the High Castle , an Amazon original series that'll have all of its episodes available for streaming on November 20. The plot imagines the Axis Powers won World War II and carved up the United States into three new zones: The Pacific States of America (under Japanese Control), a Nazi-controlled Eastern half of the country, and the Rocky Mountain States, a neutral buffer zone in the center. That certainly seems like a far-out concept for a show, and, given that it's based on a Philip K. Dick story, it probably is. So, does The Man in the High Castle have a shot at a Season 2? Update: Amazon has renewed Man in the High Castle for Season 2, according to Deadline.

Obviously, it's too early for Amazon to have made a decision about a second season when the first has only just started streaming. But, chances look good: Amazon is heavily promoting the show as its most ambitious original series, and it became Amazon's most-watched pilot when it went online in January. Still, even if it is renewed (which is likely), it's going to take a while for Amazon to put more episodes online. (That's the downside to the whole "most ambitious" thing). So, here are some other alternate-history shows and movies to watch in the meantime, in order of increasing bizarreness.

The Man in the High Castle isn't the first to wonder about what would've happened if Germany won World War II. Richard Harris did so in his book, Fatherland, which was adapted into an HBO movie in 1994. (Miranda Richardson won a Golden Globe award for it.)

Like Fatherland and The Man in the High Castle, Quentin Tarantino's 2009 film also presents an alternate take on World War II. It's not as radically different as Castle's vision of the future, but, without spoiling too much, I'll say it ends with an event that we never get to see in movies, and one that is oddly cathartic.

3. C.S.A.: The Confederate States of America

In another "What would happen if the other side won the war?" tale, this mockumentary looks at what would've happened if the South won the Civil War. Unlike The Man in the High Castle, though, this one is mostly played for laughs.

Ah, Kings. You were too precious for this world. The show features an alternate-history retelling of the Bible in which King David (played by Ian McShane) was a slick, corporate-looking monarch who ruled out of an office that looked oddly like the Brooklyn Museum (because it was). Everyone talked in this highly stylized, faux-Shakespearean tone, and it was amazing. It was just too ahead of its time — I think if the show debuted now as a limited-edition cable series instead of a regular NBC drama, it'd still be on.

OK, so we know what happens in World War II, but Southland Tales goes further, imagining what happens after World War III, which occurs after nuclear bombs explode over Texas in 2005. Director Richard Kelly's vision of this future is loony and almost too crazy to follow, but that's what makes it fun, and he gets The Rock to star as a twitchy amnesiac and possible savior for humanity.

We'll have to see if anything in The Man in the High Castle measures up to that.