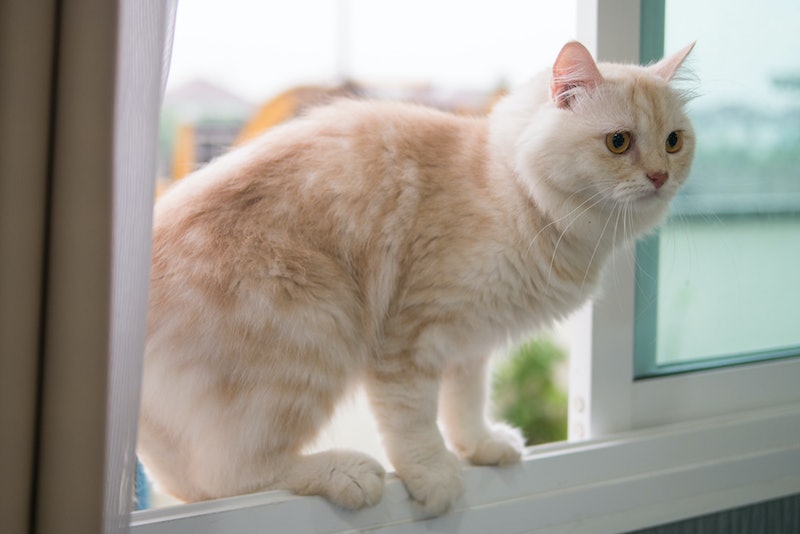 There's a new type of cat video taking the Internet by storm: cats getting scared by cucumbers. Yes, it seems that a stealthy predator which thinks nothing of bounding around tall bookshelves or exploring dark and unknown corners is in fact terrified of a common vegetable. But according to some experts, scaring cats with cucumbers is actually bad for them. So you might want to think twice about trying to pull this prank on your pet.

Based on the evidence of a dozen YouTube videos, it seems as though there is something about cucumbers which cats find unreasonably terrifying. Upon discovering a cucumber nearby, our feline overlords jump in the air, scamper away, or prepare for battle against the encroaching green monstrosity. So what gives?

Well, IFL Science suggests that it could be that the response isn't about the cucumbers specifically, but the fact that the cucumbers were placed nearby without the cats knowing. It could be that cats would be afraid of anything that was able to sneak up on them like that. Meanwhile, Jill Goldman, a certified animal behaviorist, told National Geographic that it's possible that cats' first instinct is to assume that the cucumber is a snake, which can be a deadly predator. And when you think about it, since you wouldn't find a cucumber or similar object on the floor, and since the cat didn't see or hear the cucumber approach, it isn't an unreasonable assumption.

Whatever the cause, it isn't very nice to scare your pets. And it's potentially very bad for them.

“If you cause stress to an animal that's probably not a good thing,” Goldman told National Geographic. “If you do it for laughs it makes me question your humanity.” Animal behavior specialist Dr Roger Mugford also told Metro, "I think that the reaction is due to the novelty and unexpectedness of finding an unusual object secretly placed while their heads were down in the food bowl."

Scaring your pets — for example, by tricking them into thinking a deadly predator is nearby — can cause them to injure themselves or break something once they try to leap away, and it can lead to long-term stress. Experts say it's best to introduce new objects in a pet's environment gradually.