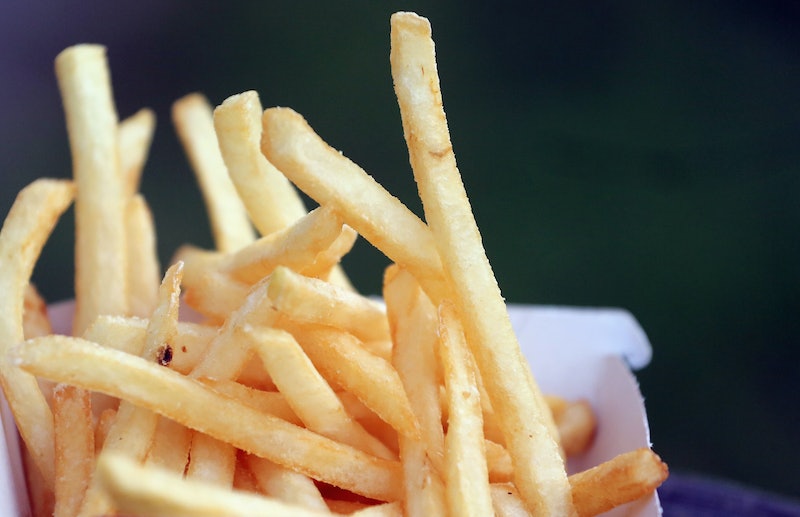 I'm always the first person at dinner who asks someone to pass the salt. I put it on everything — I even sprinkle a little on my fruit (don't knock it until you've tried it). I know that ungodly amounts of sodium in our bodies and food isn't something to be proud about, though. Out of all the sodium the average American consumes, a whopping 75 percent of it comes from processed foods and restaurant meals.

Next time you take a look at the rows of packaged foods at any major grocery store, peek at the nutrition facts. It won't take long to figure out that there are high levels of sodium in just about everything, even the stuff that is supposed to taste sweet. That's because sodium isn't only meant to titillate your taste buds. It's used to extend shelf life and preserve appearance — basically all the things that are needed in processed foods.

Then, of course, there are the restaurants. How do you think they make their food taste so good?! They add 412 extra mg of sodium to the meal than a person needs in a day, that's how. Fast food only has an extra 287 mg of sodium. In a way, that expensive, dimly lit French joint you and your partner love is worse than McDonalds.

So how much salt should we be getting? The American Heart Association recommends that Americans consume less than 1,500 mg per day, while The Dietary Guidelines for Americans recommends no more than 2,300 mg a day. Either way, most of us are way off target: the average American consumes about 3,400 mg of salt per day.

Considering the fact that salt is hiding in all kinds of nooks and crannies, just waiting to jump into your mouth, you're probably also consuming a lot more of it than you might think — and experiencing the unpleasant side effects that come with too much sodium as a result. No need to stress over it, though. Just keep an eye out for these six things that happen to your body when you eat a lot of salt — then figure out if you need to cut back.

1. Your Whole Body Swells Up

After a weekend of splurging on French fries and potato chips, don't be surprised if you see bags under your eyes, puffy lips, and inflated cheeks. Not to worry; this swelling is a symptom called edema, and it's not a serious condition you need to worry about. Your body is just trying to tell you to take it easy on the sodium.

This bloating also doesn't only happen in your face. Edema can rear its ugly head in your hands, ankles, and legs. Don't think that this only happens to people who are constantly pouring extra salt on their food; you could see this swelling simply from one night of overindulgence at a restaurant.

Dr. Neal B. Schultz, an NYC dermatologist, warns us that the older we get, the more likely we are to react like this to too much salt. No matter what age you are, though, counter this kind of bloating with lots and lots of H2O, and a brief respite from salty fare.

This one's not rocket science. All the extra sodium in your body needs to be balanced out with a lot of water, and most of us forget to fill up our water bottle after a particularly salty tub of popcorn at the movies. But when you don't drink enough, your system gets out of whack; then, your body might go rogue and start taking water from your cells. And your cells need all the H2O they can get!

Extreme thirst points to more than just a need for a glass of water. It could mean you're facing dehydration. Are you also dealing with nausea, diarrhea, and stomach cramps? Yep, you've got too much sodium inside of you, and you're not treating yourself to enough water. If the symptoms persist after you've rehydrated, speak to a medical professional.

In a study published in the journal Gut, scientists studied individuals across eight different countries and found that excessive salt intake was directly correlated with gastric ulcers in the stomach. These ulcers are thought to be a result from metaplasia, a process in which healthy tissue turns sour, affecting the mucous lining of the tummy.

What's worse is that if you continue your love affair with ultra-salty nosh, all those ulcer issues could eventually turn into stomach cancer. In 1996, the International Journal of Epidemiology published a study proving that both men and women who died from stomach cancer were linked to very high salt consumption throughout their lives.

4. Your Kidneys Don't Work As Well

Your kidneys are constantly deciding when to get rid of water and when to retain it, and they have to make those choices entirely on their own. In order for them to do their job correctly, the amount of sodium in your body can't get too out of hand, or else the balance between those two actions is thrown off. If you're eating too much salt, the water that needs to be expelled through urine might not get released effectively by the kidneys, and this could lead to bloating and edema.

Even worse, the extra sodium could bump up the amount of urinary calcium in your body, a mineral that causes kidney stones. If you don't do anything to treat yourself, all these imbalances could lead to chronic issues, like kidney disease.

The American Journal of Clinical Nutrition published a fascinating study in 2011 about how our blood flow is significantly affected just half an hour after eating a dish that is high in sodium. Scientists gathered 16 adults and kept a close watch on how their arteries were pumping blood before and after each meal.

When compared to the low-salt fare, the high-sodium food resulted in impaired blood flow in both men and women. The arteries didn't pump blood to the rest of the body as quickly as it normally did. One of the researchers, Graham MacGregor, told the Daily Mail that this research has proven that a particularly salty meal can actually alter "the function of the cells that line your artery." And this is all from just four grams of salt.

Although studying the function of the arteries in this way doesn't give us an exact sense of what the blood flow is to the heart, it's a great way to understand what kind of cardiovascular health the individual is in. So in a way, this study shows that too much salt equals an unhappy heart.

This is a side effect that usually happens to people who are consuming large amounts of salt over a long period of time. The same fluid retention that causes swelling in your face also results in high blood pressure, and your trusty heart is unable to receive all the oxygen and nutrients it needs. The harder your blood pushes against the walls of your artery and the less your heart gets what it needs, the more likely you are to experience something deathly serious, like stroke or heart attack.

Because there are no identifiable symptoms of high blood pressure, many people don't realize they have it, and they could live a long time without treating it. So be sure to get your blood pressure tested from time to time (you can pretty much do it at any pharmacy), and the second you feel chest pain, don't hesitate. Talk to your doctor about what can be done to put less strain on your heart.