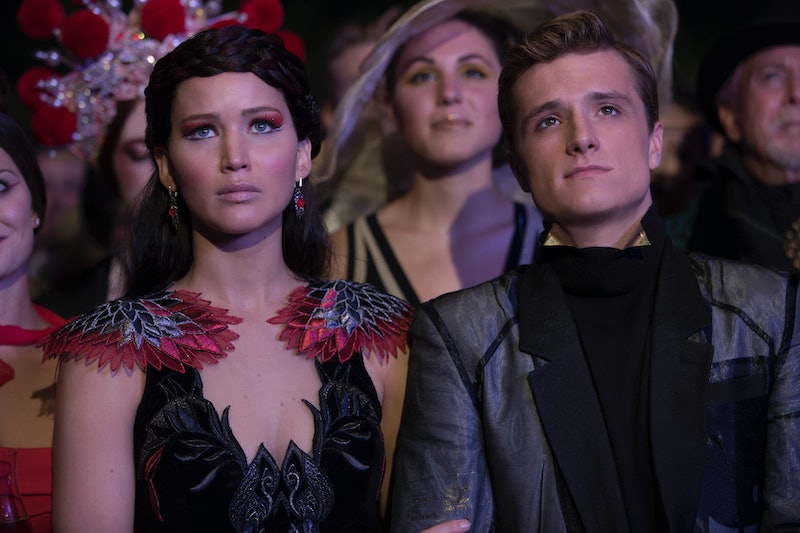 Over the last several years, the Hunger Games franchise has made me cry a lot. And, let's be honest here, the Hunger Games franchise has probably made you cry a lot as well recently. But if there's one scene that I'm bringing tissues in anticipation of my sob-fest in theaters for, it's the "Real or Not Real" Mockingjay scene between Peeta and Katniss that's bound to be present in the movie. It's the scene I'm looking forward to the most in The Hunger Games: Mockingjay, Part 2 when it hits theaters on Nov. 20, and for those of you who aren't caught up with the books and don't know what I'm talking about, let me fill you in. Spoiler alert!

But first, let me swoon about it a bit more. The "real or not real" scene, which takes place in the middle of Mockingjay when Peeta asks Katniss if her love for him is true, is the most romantic way Katniss could ever accept Peeta's love for her, as it's the most romantic way Peeta could rouse that confession from her. Why? Because it's an affirmation that there are no tricks or ulterior motives behind the reality Peeta is left with by the end of Mockingjay. As we all know, Peeta's had it pretty bad for Katniss from the start, but needless to say, thanks to the Hunger Games, it was difficult for Peeta to ask Katniss out on a date. From there on, he was faced with so many obstacles that one would think he was never gonna get a shot at happiness with Katniss.

So let's look at how Peeta's long journey lead to his final, beautiful confession.

Peeta first fell for Katniss when they were children, when he heard her sing beautifully in class after she volunteered to when their teacher asked. Peeta was 100 percent swayed by Katniss' Disney princess tendencies.

Then came the famous bread incident. When Katniss was starving and scavenging for food, Peeta purposely burned bread so he'd have an excuse to throw it out and help feed her. Because it would suck if the love of your life died before anything even started. Good looking out Peeta, good looking out.

In a twist of fate, the two of them get reaped for the 74th Hunger Games. And Peeta was like hell yeah I get to spend time with the girl I like — wait, oh sh*t, only one of us is probably going to survive this. #PanemProblems. In order to gain sponsors and survive during the Games, Peeta and Katniss pretend to be lovers. Except it was all real on Peeta's end... but not so much on Katniss'. And Peeta was like: :') #MoHungerGamesMoProblems

Then came the cave scene! Peeta confessed to Katniss and they get to kiss — for real. It was probably the first truly happy moment for Peeta throughout the Hunger Games.

But then Katniss was like "sorry Peeta, it really was all just an act" by the end of their Hunger Games run. And in Catching Fire their previously hot feelings run cool as Katniss finds herself spending time with her District 12 bae, Gale. And so the plot of the Love Triangle thickens.

Peeta, being a Good Guy, accepted the fact that Katniss had feelings for Gale and decided he would back off if Gale was the man she truly wanted. Even if it meant his own heart would be broken in the process.

But then there's the beach scene. Katniss and Peeta believe that only one of them is going to survive the Hunger Games a second time around, so Peeta gives Katniss two things: a locket filled with Katniss' most important people, and a pearl, saying that Katniss is one (aww). And they kiss! #TeamPeeta fans rejoiced everywhere.

By Mockingjay, we learn that Peeta gets taken by the Capitol and tortured. #TeamPeeta fans cried everywhere.

Thankfully, in a District 13 rescue mission, Gale brings Peeta back, yay! Bad news is, the Capitol hijacked Peeta's mind and messed with his memories, thus making him out to kill Katniss. Not so yay...

Peeta's memories of everlasting ~love~ for Katniss, however, overpowers the violent urges planted in him by the Capitol and he snaps out of it. Proof that love really is the most powerful thing of them all.

A Glimmer Of Hope

But Peeta still worries that he might end up killing Katniss and thinks the best solution is to die himself. But Katniss supports Peeta, her feelings for him shining through. There's no way Katniss is allowing Peeta to die on her watch, not after everything he has gone through. They play the "real or not real" game as Peeta regains his true memories.

Peeta even plants primroses around Katniss' house after Prim's death, proving once again that he's a stand-up guy. What a loving, sensitive gesture.

Real Or Not Real

And finally comes the heartwarming moment: Peeta asks Katniss, "You love me. Real or not real?" And Katniss responds, "Real." After being deprived at the chance of a real future with Katniss through the lies of their on-screen Hunger Games romance (remember when they lied about being engaged and Katniss being pregnant?!), as well as the lies that brainwashed him thanks to the Capitol, Peeta is set free of falsehoods. Instead, he is given one incredibly romantic truth. The most important truth of all for him, really: that Katniss loves him back, and this time around, she undoubtedly means it.