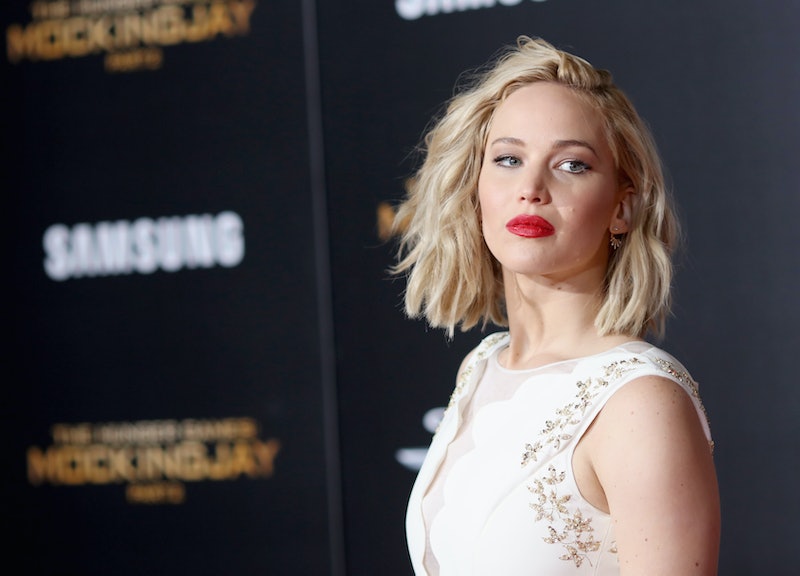 On Wednesday, The Hollywood Reporter released the cover for its actress roundtable, and it was, unsurprisingly, a sea of white faces. The Nov. 27 THR Hollywood Roundtable issue features Jennifer Lawrence, Cate Blanchett, Kate Winslet, Carey Mulligan, Jane Fonda, Brie Larson, Helen Mirren, and Charlotte Rampling, who sat down at the roundtable with THR's Executive Features Editor Stephen Galloway to discuss, among other things, the pay gap problem in Hollywood and the inevitable “backlash” that is the cost for speaking out frankly.

And it’s a huge negligence, to speak frankly myself, that in a conversation about the wage disparity, certainly a kind of discrimination, there are no actresses of color to lend their points of view as people suffering not only from the wage gap, but also the institutionalized and unapologetic racism of Hollywood.

Soon after the cover was revealed, Galloway published an explanation in an article titled “Why Every Actress on The Hollywood Reporter Roundtable Cover Is White,” as an apology of sorts, but also as a denial of most of the responsibility, saying that the industry, not the magazine, was to blame for having so few actresses of color to be able to choose from for such a cover story. It’s not a totally satisfactory response, but I do have to concede that he has a point. Hollywood is so discriminatory that there aren't many actresses of color to choose from. But, that said, couldn’t THR have found at least one? Is the bare minimum so much to ask for?

Apparently, it kind of is. Galloway detailed the complicated process of relentless campaigning that actors and studios take part in ahead of awards season, comparing the promotional barrage to presidential elections: “Behind every movie and every star is Hollywood’s version of the Koch brothers, battling for their chosen candidates to win.” Galloway went on to say of the absence of actresses of color:

In doing all that this year, as we prepared for this cover, we discovered precisely ZERO actresses of color in the Oscar conversation — at least in the weeks starting early September when the roundtables are put together, weeks before they take place and months before the nominations are announced January 14.

He went on to ask who shoulders the blame for the absence of roles for women of color? He quoted Viola Davis’ powerful Emmys acceptance speech; the one she gave when she made history as the first black woman to win for Lead Actress: “And let me tell you something. The only thing that separates women of color from anyone else is opportunity. You cannot win an Emmy for roles that are simply not there.” But for The Hollywood Reporter to shirk responsibility in not creating opportunities when the chance is available to them doesn't fly with me.

One highlight of his "mea culpa" is Galloway's discussion of the fact that the current president of the Academy, Cheryl Boone Isaacs, a black woman, launched the initiative A2020, "a five-year plan to get executives to think outside the traditional thinking when hiring, mentoring and encouraging new talent," focusing on voices of color. At the Governor’s Awards on November 14, Isaacs said, "Words are not enough; we need to take action."

To suggest that The Hollywood Reporter is somehow removed from the industry is nonsensical. If studios and actors are campaigning so fiercely to be a part of these roundtable discussions, THR has clout and influence and the opportunity do more to change the conversation. If the studios are not hiring people of color behind the scenes and in front of the camera, that doesn't mean THR has to follow suit. I don’t purport to have the solutions, but obviously Galloway is an industry insider, and he has power to contribute to these changes.

Galloway ends his piece with this statement:

If there were far more minority men and women to choose from, this sort of hand-wringing would never exist. And it’s about time it changed. Unless the half-dozen men and women now running the major studios demand and foster a culture of diversity, the status quo will continue as it is. And I’ll be writing a mea culpa every year.

And while his apology is thoughtful, I can't help but want something more. Hopefully, Galloway realizes that his stake is influential and that change happens not only in the insular world of the Academy, but in the industry at large, where he and The Hollywood Reporter (and, of course, the rest of the media) have to share in and recognize their responsibility to be more inclusive to people of color.