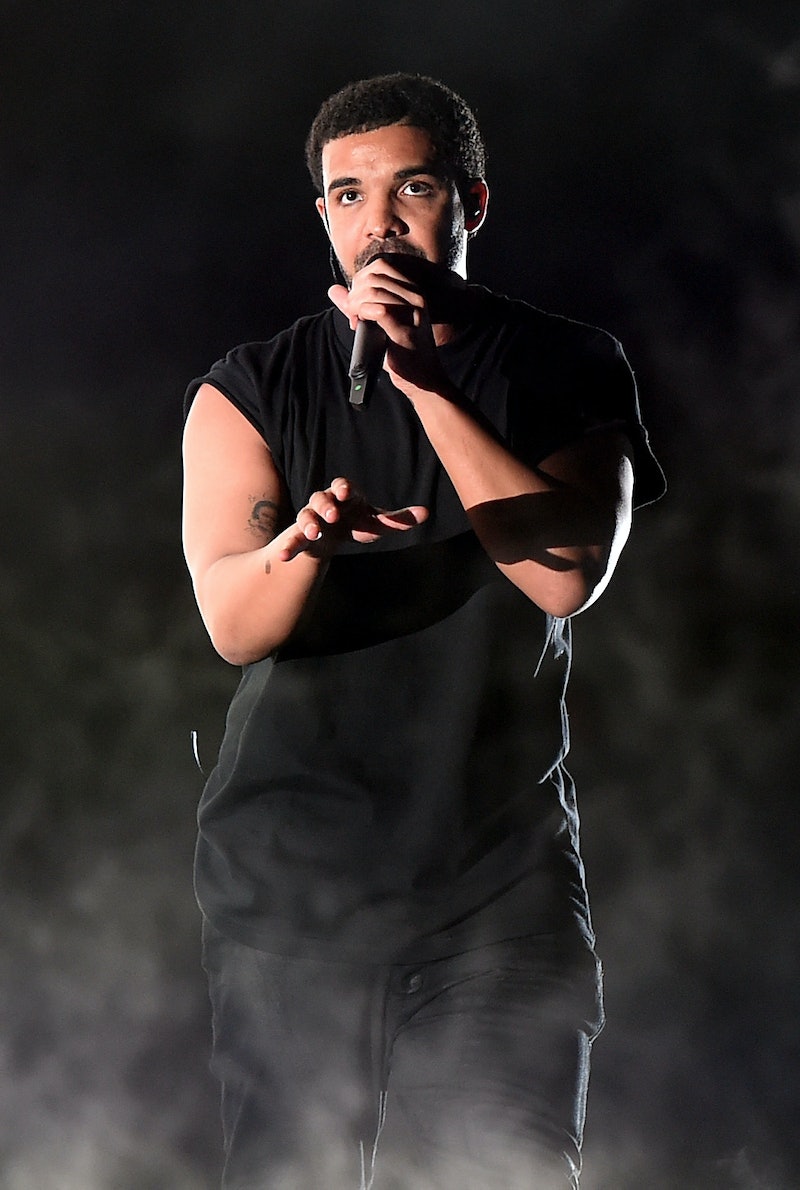 In case you're not over Drake's smooth (read: dad-like) moves in his music video for "Hotline Bling," go ahead and get your Aubrey Graham fix this weekend at the 2015 American Music Awards, because the rapper/one-time Jimmy Brooks is up for two prestigious awards and I'm all about it. Drake is nominated for Favorite Rap/Hip-Hop Artist (battling it out against Fetty Wap and Nicki Minaj), as well as Favorite Rap/Hip-Hop album, with his surprise release If You're Reading This It's Too Late going head-to-head with Minaj's The Pinkprint and J. Cole's 2014 Forrest Hills Drive. Of course, the artist is going hard in his respective categories, but will Drake actually be at the 2015 AMAs? That answer kind of remains a mystery.

Unfortunately, save for a surprising last-minute announcement, the rapper won't be performing at the L.A.-based award show, which airs live on Sunday, Nov. 22. That being said, the AMAs aren't exactly skimping on A-list talent: I'm personally here for 5 Seconds of Summer, who will join One Direction, Coldplay, Ariana Grande, Demi Lovato, Gwen Stefani, Selena Gomez, and a host of other big-name acts as performers that night. Of course, Leon Bridges literally just was announced as a performer on Wednesday (Nov. 18), so there's still time for Drake to swoop in at the last second and wow everyone with the brilliance of his live show. And hey, it's already pretty clear that the dude loves surprises.

While a wealth of other A-list names are also scheduled to present — Kylie Jenner, Fifth Harmony, Ellie Goulding, Gigi Hadid, Shawn Mendes, Wiz Khalifa, and Zendaya, you know, just to name a few — Drizzy disappointingly isn't on that list, either. Still: What's to say the rapper won't be smiling away in the audience, waiting patiently to collect his trophies like a boss? I mean, even if he doesn't win, he could still casually rock out to some fine-ass performances from 5SOS and 1D, because obviously somewhere in the mystique of @champagnepapi lies a fangirl just waiting to be unleashed. And what better way to break her out at the 2015 American Music Awards?

Though Drake has yet to win an AMA in his career — a collection of seven nominations don't lie — maybe 2015 will finally be his year. And really, who would want to miss that moment? Hopefully, not even Drake himself — which is why I'm hoping once the camera pans over the audience on Sunday night, I'll see that familiar grin of Aubrey Graham. And here's to hoping that if you're reading this, it's not too late.