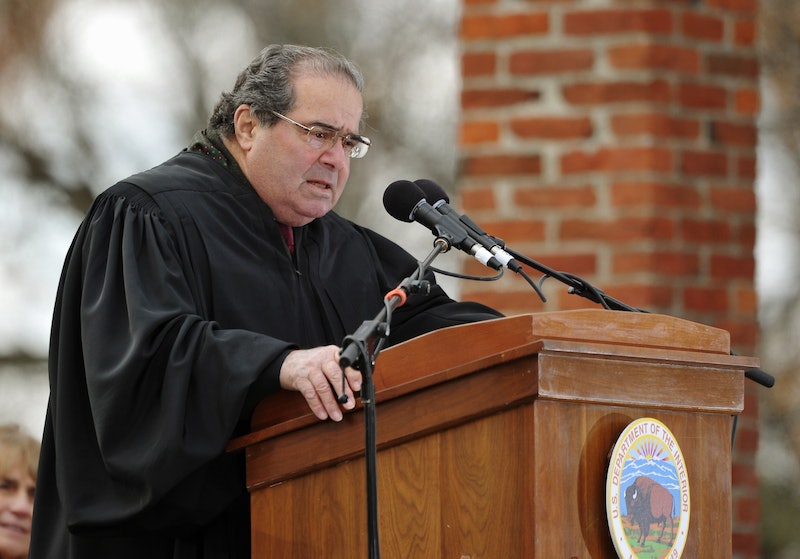 On Monday, Supreme Court Justice Antonin Scalia spoke at Georgetown University to a group of law students. He told them that the Court protecting LGBT Americans is unwise and unconstitutional. Worse, he then made a not-so-subtle comparison between gays and criminals, another "minority group" that might ask for similar protection. It's time for Scalia to stop comparing gay Americans to sex offenders. It's dangerous, foolish, and insulting to all citizens.

In his speech, Scalia, who is an ardent and consistent constitutional originalist, expressed skepticism over the Supreme Court's power to determine which minority groups deserve protection. “What? It’s up to me to identify deserving minorities? What about pederasts? What about child abusers?” He seems to think the decision is arbitrary, while ignoring the fact that sex offenders are violently breaking the law by harming children, while gay people are doing nothing of the sort. Whatever. Comparing LGBT people to pedophiles is outright dangerous, and has no place in a discussion of protecting them as a minority group. Child abusers are not such a group, even if they are outside the majority. They are criminals.

This isn't the first time Scalia has compared homosexuality to pedophilia. Say what you will about him, but Scalia is a brilliant guy, so I'm sure he doesn't actually think there is any kind of connection. That would be absurd. But several times, he's made the argument that protecting gay rights opens the door to allowing sex offenders to walk free. In 2003, the Supreme Court ruled that a Texas law banning sodomy was unconstitutional, after police arrested two men for having sex privately in their home. Scalia, however, disagreed:

In other words, Scalia thinks that the same power which gives states the right to say that bestiality is against the law gives them the authority to make gay sex illegal. He continued, "The impossibility of distinguishing homosexuality from other traditional 'morals' offenses is precisely why Bowers rejected the rational-basis challenge."

It doesn't matter if you don't know who Bowers is, or if you aren't clear on what a "rational-basis challenge" actually means. The case, Lawrence v. Texas, has absolutely nothing to do with prostitution or bestiality. As the majority of the Court affirmed, the decision was about the right to privacy, not about which particular sex acts are admissible or not.

This is a great opportunity to look back to Scalia's outlandish dissenting opinion on the June case which legalized same-sex marriage nationwide. Now, the U.S. needs a law which protects gay Americans from discrimination. Scalia's remarks hinder this cause, and hurt regular, law-abiding people who just want the Constitution to apply to them the way it does to everyone else.