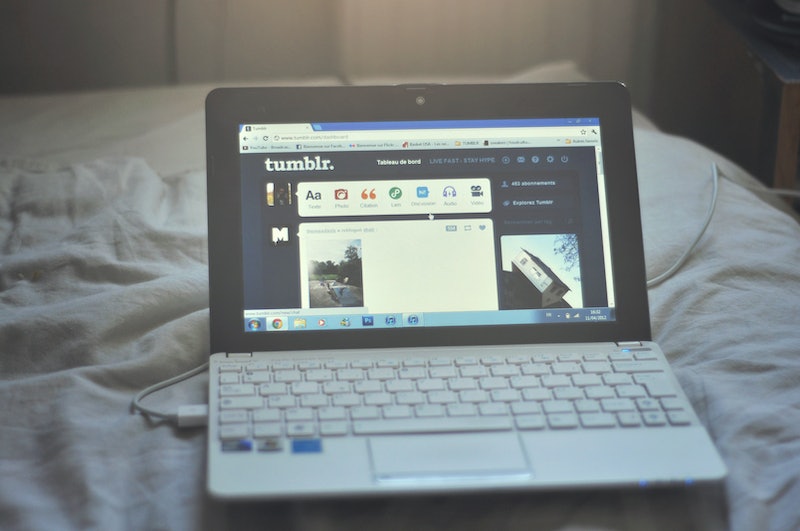 There are not a lot of things that unite almost every person in the world, but here's one of them: everyone loves GIFs. This is why it's such momentous news that Tumblr's mobile app now lets you make GIFs in a few minutes — so in order to celebrate, here's a step-by-step tutorial for how to use the Tumblr GIF maker. You're welcome.

I'm not kidding when I say that everyone loves GIFs. They're a kind of language everyone can use! They're basically moving hieroglyphics! The only crappy thing about them is, unless you know your way around Photoshop, they can be tricky to actually make... until now. The Tumblr app's new feature is frickin' amazing for those of us who would rather use a photo of ourselves rolling our eyes than Rihanna when we're fending off suitors.

This feature is only available on iOS devices right now, but it is coming to Android soon — which means that everyone you know will be liberally making GIFs of themselves doing, like, skateboarding tricks or wiggling their nose in short order. Readers: you need to get in on this ASAP and become a famous meme now! Just remember where you came from (that is, reading the website Bustle a mere few minutes previously).

If you already use Tumblr and have the app on your phone, you don't need to do anything new — it's all there already. Here's how to turn any video or photo stream into a GIF using the app:

1. Open the Tumblr App on Your Phone or Tablet

Try not to get distracted by awesome pictures of John Waters hanging out with Angela Lansbury. Instead, click on the pencil at the bottom center of the app, like you would to make a new post.

You know, that red button in the center. There you go.

3. Press the GIF button at the Bottom of the Screen

You'll be confronted with all your GIFable content — that means either a video (such as my lovely MyIdol video on the lower left) or a "photo burst" — what iOS calls that quick frame-by-frame snap of photos you're able to take when you want to search through 100 different takes of the same moment in time for the best shot. Choose whatever you like — I liked the video I took of the boardwalk of Coney Island at night. Of course, the fun of this is in making videos that you plan to turn into GIFs, so go crazy with that.

4. Choose Three Seconds' Worth of a Loop

Using the handy slider at the bottom.

5. Choose the Speed and Loop

Do you want a super fast GIF, or something approaching real time?

Your creation will now be available for the picking from your camera roll on Tumblr. Who needs a Rihanna eyeroll when you have my 20-something office manager friend Jennifer Memmolo?