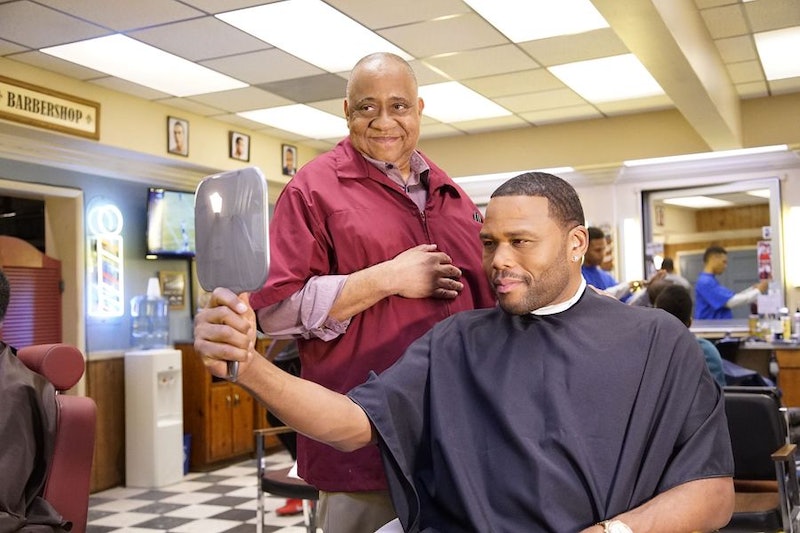 The best episodes of black-ish find new ways to make funny observations about culture, especially black culture — the church episode from earlier this season is a perfect example. So when black-ish does a "Good Hair" theme, they do it with a twist. Usually women get the focus of the hair conversation, but the barbershop has just as much great history behind it. And since men get their hair cut far more frequently than women, Dre realizing that his barber can no longer cut hair like he used to is urgent news, especially since loyalty is a valued and important quality for a barber shop customer, and his son, Junior, just got a sick new 'do from a newer, cooler barber than Dre's old fave.

Dre even considers giving up the barbershop. But the episode tries to drive home the message that the barbershop tradition is important, but a mixed bag. It's a place where even the nerdy Junior can find some older mentors, where even the always-yammering Dre gets teased, and a chance to befriend neighborhood weirdos like the conspiracy theorist (though I've heard of that Nation of Islam and Scientology rumor. The barbershop crew knows what they are talking about). And Dre's unhappiness with his barber means that the fate of the family Christmas card hangs in the balance.

After years of suffering terrible photos because Bow spends too much time on a corny theme, then gets so verklempt that she cries in the photo. But when Dre's mom takes over, the rest of the Johnson kids are dismayed to hear that the new theme of the family Christmas card is going to be "elegance," which basically amounts to Ruby using the cast of Empire as her inspiration.

Her final "trick," of convincing Bow to dress as an Empire cast member while everyone else dressed in their gingerbread costumes, doesn't seem like that big of a deal. Embarrassing Christmas cards matter a whole lot more on TV than in the real world — but embarrassing haircuts, now that's relatable.