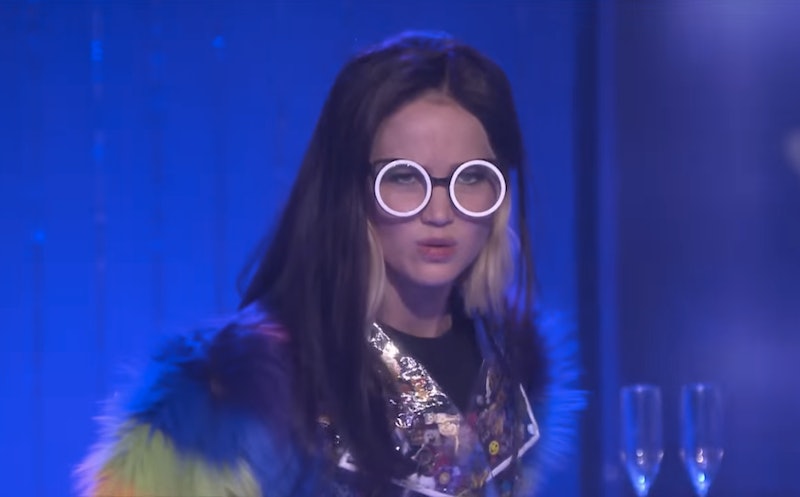 Jimmy Fallon and Jennifer Lawrence are always a winning comedic combination, and that proved to be the case when the actress stopped by The Tonight Show in order to promote her upcoming movie Mockingjay, Part 2. (Maybe you've heard of it?) During the interview, Fallon revealed that there were 2 a.m. infomercials for a dance tape featuring Des and Dash, two people who bore a striking resemblance to Lawrence and Fallon. Although the actress was dubious, the host played clips from Lawrence's dance tape with Fallon that were so amazing that I don't even know where to begin. Actually, no, wait, I do know where to begin. What are those rainbow monstrosities that Fallon and Lawrence are wearing and, more importantly, how can I learn even a few of the numerous dance moves that they bust out during the tape?

Des and Dash have but one simple request: they want people to come and dance with them. However, no matter how many infomercials they make, no one ever wants to come and dance with them. (I think the outfits might have something to do with it, although the pair seem to think it's because of their "small mouths.") But, if you want to come dance with Dash and Des, but aren't sure if you can pull off their awesome yet fictitious dance moves, I've got you. Here's how to perform seven of the best moves in the infomercial.

Hide behind your hands as if there is a toddler in front of you that you want to delight by "disappearing" before their very eyes. Then let your hands fly forward outward from your nose and mouth as if you've just released a large sneeze and want to spread those germs everywhere. Repeat.

Move your right or left arm up and forward as if setting a lunch box on a table and beginning to open it. Then, move your opposite arm up to your forehead as if saluting your commanding officer — before returning to your lunch.

Move one leg backward along with your right and left arm, as if you're winding up to throw a bowling ball down a lane. Then, as you come forward with the ball, jump into the air and throw both arms over your head as if you're throwing confetti everywhere.

Grip both hands around an imaginary oar and move the oar behind you and off to one side like you're trying to move a kayak down the rapids. Then, move your hands back in front of you. Hold one in front of your body, positioned as if you're gazing at a watch, while two fingers of the other hand go to your pulse point to check and make sure you're still alive.

Stand in front of another person. Tip your entire body to one side with your leg sticking out, then tip your body to the other side with the other leg sticking out. Your friend should be tipping in the opposite direction of you at all times, although real windshield wipers don't operate like that.

And, of course, there's the end of the video pose. This is where you freestyle, go wild and crazy, but also make sure to pick a position that you can hold for long enough for the room to go dark and the screen to move to commercial break.

Now that you're a dancing queen, learn more moves below. Oh, and don't forget to dance with them.