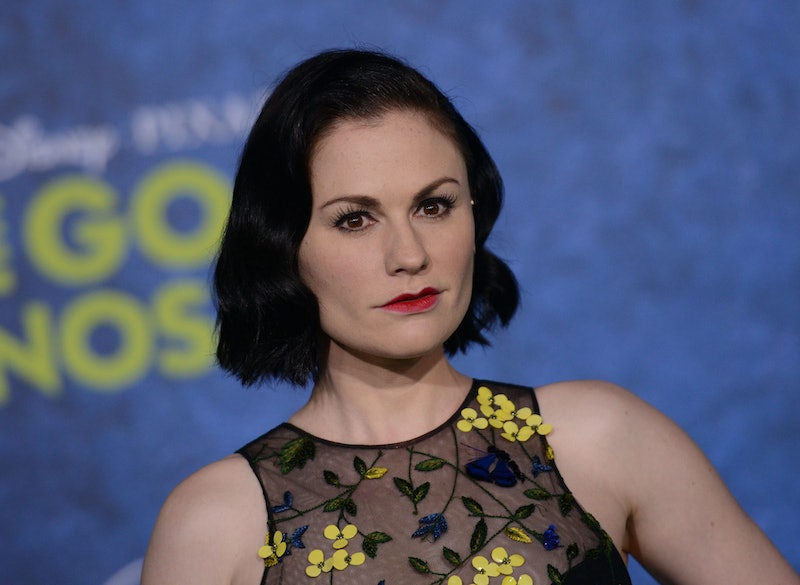 Anna Paquin doesn't have time for online body-shamers. You know, those people who hide behind their computers to insult and bring others down. Paquin made this very clear with one tweet on Tuesday, after some criticized the way she looked at the premiere for her upcoming movie, the animated Pixar film The Good Dinosaur. Paquin slammed her body shamers with, "Fun fact: Wearing a dress that is not skintight = Pregnant/invites people 2 call u fat. I'm neither so thanks 4 that." Drop the mic, Paquin's out.

But the actress wasn't quite done defending herself and others who have received unwanted attention from Internet bullies about their appearance. "Dear mother nature, people who bravely hide behind computers and pass judgement have informed me my pale skin and dark hair=old/ugle [sic]/harsh," she tweeted. The tweets got her fans speaking up for the star, sending messages of love and support, and even more that told her to ignore anyone who would say such things. Paquin later wrote, "Sorry if this feels like blatant compliment fishing, really not my intention but do appreciate the love xo."

Of course, it goes without saying that Paquin is beautiful, but the compliments should be geared towards how impressively she handled this whole situation. In just under 140 characters, she made it very clear that she's not going to let some mean people get her down. Paquin's not looking to start a fight, though; she's just looking to stop one.

Throughout her career, Paquin has always been outspoken, but manages to do her speaking with very little words. In 2014, Paquin set the record straight about her sexuality with one very well-worded tweet: "Proud to be a happily married bisexual mother. Marriage is about love not gender." The message came four years after she revealed she was bisexual, which was just months before she married her True Blood co-star Stephen Moyer. It was in a 2012 interview with Zooey that Paquin so eloquently put into words the reason she stands up for LGBT rights. While she refers to her own sexuality as a "minor biographical detail," that's not the case for everyone. "If you're going to talk about some cause in a way that's meaningful, you should identify why it means something to you," she said. "For a bisexual, it's not about gender. That's not the deciding factor for who they're attracted to."

It's something she seems to have taken to heart, using her celebrity to, as The Daily Beast explained, offer a "bisexuality for dummies," to those who were confused on how a woman who says she's bisexual could marry a man and still be monogamous. This is what happened when she was interviewed by Larry King back in 2014. The TV host kept prodding her for information about her sexuality, eventually asking, "Are you a non-practicing bisexual?” She shut him down in the nicest and smartest way possible, while also showing just how patient she is. Paquin told him she was “monogamously married," and that bisexuality isn't a "past-tense thing." She then explained to him that being married doesn't mean her sexuality disappears. She is bisexual and married and can be both at the same time. So few words, but so much meaning behind them.

Whether it's explaining what bisexuality is or calling out body shamers, Paquin always manages to keep her cool, eloquently putting her thoughts into the simplest of words. But she's always honest, as she explained to Redbook. "I'm a pretty straightforward person," she said. "I'm not the friend you're going to ask, 'Do you like my outfit?' if you don't potentially want to hear, 'Not really.'" And she doesn't need to be that friend, or that celebrity. Her greatest quality is that she seems able to put her feelings into these fine-tuned messages that you can't help but quote. Even better, she is completely unafraid of standing up to anyone who puts her views in question. If they do, she'll just drop a well-crafted tweet to show them who's boss.