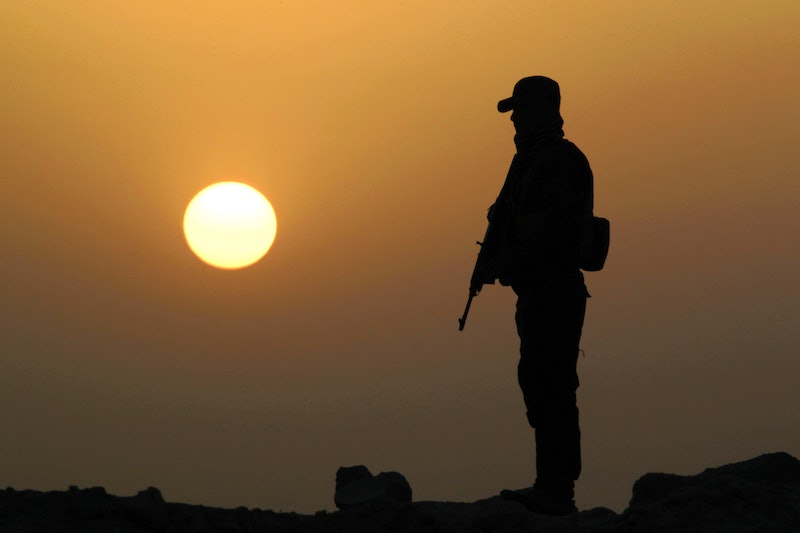 As ISIS continues to make headlines, many are trying to find answers for the group's violent attacks and terrorism. The militant organization claims it's waging a war steeped in the principals of Islam, but a majority of Muslims have come out to say ISIS betrays their religion and goes against their core beliefs entirely. So, what does ISIS believe?

ISIS is interested in establishing a caliphate — that's a radical, extremist state with a supreme ruler — while also helping to bring about the apocalypse. Their two primary ideals, however, seem completely at odds with each other. ISIS leader Abu Bakr al-Baghdadi sees himself as the caliph, or ruler. His deep knowledge of Islamic scripture is what primarily informs the rhetoric of ISIS, though even the seventh-century texts he draws from are distorted to fit a violent vision.

According to William McCants, director of the Project On U.S. Relations With the Islamic World, it's that very keen knowledge that the ISIS leader uses as a means to justify contradictory activities. In an interview with Vox about ISIS' abuse of scripture, McCants used the example of the group burning a Jordanian pilot to death — an act that is explicitly condemned by Mohammed — to illustrate the dichotomies of ISIS. McCants said:

Burning an apostate is only a punishment that God can mete out in hell, but the Islamic State did it anyway... knowing full well what scripture said but in a way inviting the debate. And when objections were raised in the religious scholarly community, ISIS was able to fire back all of its arguments for why the punishment was Islamic, and they could point to other places in scripture where Mohammed had justified eye-for-an-eye type punishments when his enemies had been particularly ruthless.

Conversely, ISIS is also of the belief that the end of the world is near and will be ushered in by the otherworldly being Mahdi. When the group overtook Dabiq, Syria, it felt as if the group was following a path foretold in scripture that would bring about the end of days. ISIS followers believe that a Roman army will face off against them in Dabiq, they will defeat the Romans, then the caliph will set up in Istanbul, where the Islamic State will spread even further. The caliph's army will be vastly depleted by a rogue deity known as Dajjal, and it will not be until Jesus descends to Earth that Dajjal is defeated. Thousands will perish in this series of apocalyptic battles.

ISIS' views and actions completely go against what Muslims actually believe and instead are extremism at its worst. Repeatedly, the Quran condemns senseless violence towards others as in Quran 5:8 and 2:190. One of the most prominently cited verses, Quran 5:32, proclaims that "whoever kills an innocent person it is as if he has killed all of humanity." This excerpt shows just how frowned upon ISIS' extremist policies are to the Muslim world. Similarly to the biblical commandment proclaiming that "thou shalt not kill," Quran 17:33 echoes that sentiment, which explicitly condemns murder.

While many view ISIS as radical Islamists, the reality is that the group's violence and desire for terror do not reflect true Islamic teachings. ISIS is intent on conquering specific regions and waging violent battles that directly contradict Islamic teachings — all in the name of an extremist apocalypse whose survivors will adhere to the same tenets as the Islamic State. The reason for such destruction is further bolstered by the group's desire to rid the earth of impure nonbelievers. That's why it's important to understand that ISIS and Islam do not believe the same thing.