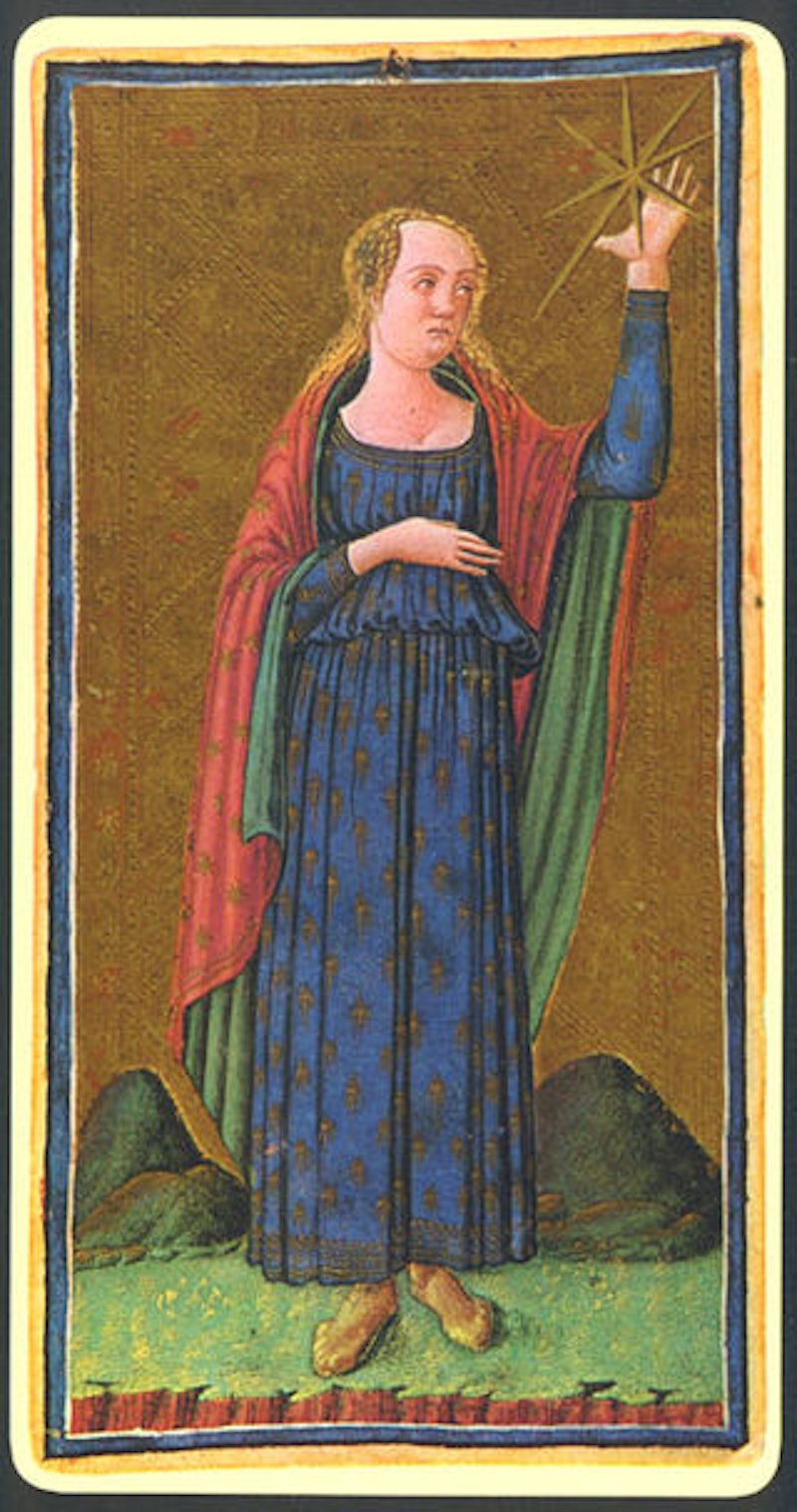 The practice of trying to divine the future by using tarot cards — which involves laying down the cards of a tarot deck, one by one, and interpreting the results — is often thought of as a cliche of New Age culture, and a trapping of witchy stories in general. Tarot cards often show up in TV and film in order to provide some creepy atmosphere; for example, the Showtime show Penny Dreadful, which is chock-full of vampires, werewolves, demons and other occult figures, even offers a do-your-self tarot deck on its website. And even if you've never been part of a tarot reading, you're probably familiar with some of the beautiful figures on the cards: the Magician, the Wheel of Fortune, the Tower, and the Lovers among them.

But tarot has a weirder — and much more benign — history than you might have thought. It's not just for witches or the terminally spooky; it wasn't always used to answer questions about life and the future; tarot cards are considered by many to be works of art; and the game of tarot has been played, in one form or another, for thousands of years.

Wondering where tarot cards came from, and why so many people believe that they can offer insights into our lives and futures? Then read on for five facts about the history and development of the tarot card that might change the way you think about them.

1. Playing Cards Were Brought To Europe By Islamic Soldiers

To start at the very beginning: Though many people associate playing cards with European culture, the original playing cards weren't from Europe. Rather, they were brought to Europe by Islamic soldiers who were invading northern Italy, Sicily and Spain in the 1500s. The soldiers in those conflicts brought with them a game named Mamluk.

This game featured distinctive cards, often hand-painted with incredibly intricate designs and gold leaf. If you see Mamluk cards today, you're looking at the origin of all Western card games, from bridge to poker, and, yep, tarot. The game's cards had four suits, and there were 14 cards per suit, including three "courts", or royal cards: the king, the viceroy and the second viceroy. The first name for playing cards in Europe was derived from the Arabic word nāʾib, meaning "viceroy." Malmuk cards became popular, introducing Europeans to the idea of passing the time by playing card-based games.

2. The Original Tarot Cards Were An Italian Storytelling Game

Once Mamluk cards got many Europeans interested in playing card games, new card games came on to the scene — including one that would eventually evolve into today's tarot deck.

Many historians currently believe that tarot cards originated as a kind of storytelling game played by Italian noble families. The old Mamluk cards were co-opted for a game called “carte da trionfi” or cards of triumph, with new card decks commissioned by wealthy Italians for these games.

These new, opulent cards featured designs that incorporated symbols and figures, and were used for an early form of the card game bridge. They were also used for a game called tarocchi appropriati, where cards were laid out at random, and players had to make silly poems about one another based on the symbols that came up. And presto, you had the original form of tarot — a game of creativity, rather than an attempt to glean information about life using mystical tools.

So how did the relatively pedestrian carte da trionfi become modern tarot cards, which are regarded as a method of accessing the subconscious, the future and occult forces? Answer: the French. Or, more specifically, a bunch of French occultists, most notably one named Antoine Court de Gébelin.

He was likely the first person to ever say that tarot cards carried any occult weight, but the idea stuck.

Tarot cards these days are comprised of two decks: the Major Arcana, which contains all the famous figures and pictures that you may be already familiar with, and the Minor Arcana, which are a bit like modern playing cards, complete with suits (though rather than our typical playing card suits of hearts, diamonds, spades and clubs, tarot card suits include swords, cups, coins and batons). But there have been many variations away from that structure, both historically and in the present day — and through the years, plenty of people (some of them quite famous) have designed and developed different versions of the tarot deck.

If you've ever heard of Aleister Crowley, you'll understand why the dude was drawn to tarot. He's likely one of the most famous mystics and occultists to ever live — in the late 19th and early 20th century, he founded his own religious philosophy called Thelema, claimed to be in contact with various supernatural forces, and engaged in various activities that led the British tabloid press to dub him "the wickedest man in the world."

At one point, Crowley decided to basically reinvent the tarot deck, putting in principles from his own religion, as well as the Jewish mystical practice Kabbalah, and various other influences. Unfortunately for Crowley, it never really caught on, and he died before it could be fully released. It's called the Thoth deck, and is commercially available, in case you're curious.

Though there are many different tarot deck designs out there, including ones hand-made by artists, there are a few very famous designs out there that probably pop into your head when someone says the word "tarot." These designs are famous because of mass production: Once technology allowed tarot cards to be printed by press as opposed to hand-painted, certain designs started to dominate.

Probably the most famous tarot deck design is the Rider-Waite deck, named for the publisher, William Rider, and the occultist A.E. Waite, which Collectors Weekly (yes, people do collect these cards) says was first produced in 1909. It's never been out of print since — even though the original plates for the Rider-Waite deck were destroyed in World War II and all the original artwork is lost.

And then there's the Tarot de Marseille (pictured above), which dates back to the 17th century and is one of the most common designs for tarot decks in the world.

Though the tarot's journey from parlor game to occult and spiritual practice is complicated, it is a reminder that many of our cultural tropes have a much more complex past than we think — and that just because something shows up on Halloween decorations, doesn't mean it is hopelessly spooky.

More like this
You Probably Didn't Realize These Common Problems Are So Cheap & Easy To Fix
By Julie Peck
You Probably Didn't Realize These Expensive Mistakes Around The House Are Actually Easy To Avoid
By Mackenzie Edwards
The Death Tarot Card Meaning, Explained
By Kristine Fellizar
Your August 2022 Monthly Tarot Reading
By Jezmina Von Thiele
Get Even More From Bustle — Sign Up For The Newsletter