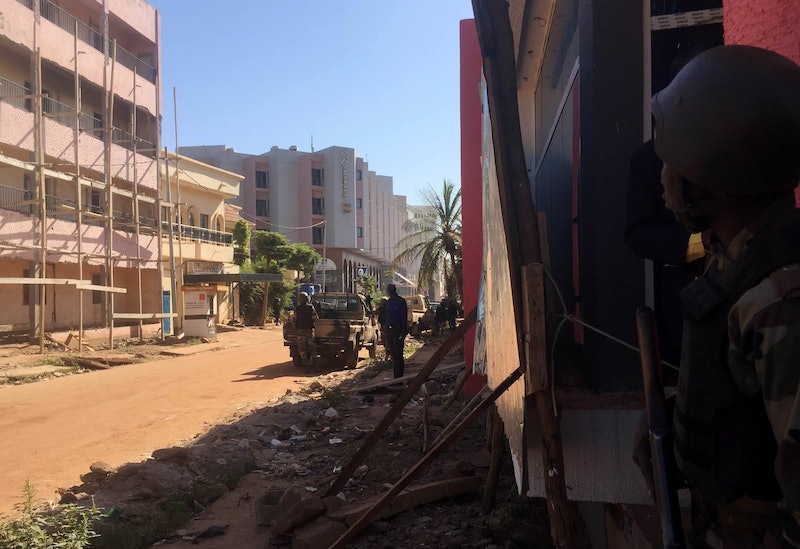 Update: The situation at the Radisson Blu hotel is now reportedly under control after several harrowing hours, at least according to Malian general Didier Dacko, who told The New York Times that the perimeter of the hotel is secure, and that forces are "inside looking for the terrorists." The reported human cost of the attack, however, is high — the United Nations believes no less than 27 people were killed, after a reported 100 or so were taken hostage earlier in the day. According to CNN, six Americans so far have been saved from the hotel, and at least two of the gunmen have been killed.

Earlier: An unknown number of gunmen armed with grenades and shouting "God is great" in Arabic seized a Radisson Blu hotel in Bamako, Mali, on Friday morning, according to the New York Times. The gunmen have killed at least three people and took at least 170 hostages — 80 were freed, according to CNN. Why target the Radisson in Mali's capital? The hotel was a popular place for diplomats and rich foreigners, according to the Times.

So far, the attackers are only being referred to as Islamist extremists because no specific terrorist group has taken responsibility for the attack, but the Times reported that ISIS supporters were celebrating the attacks on Facebook with the hashtags #IslamicState, #ParisIsBurning, and #Mali_Is_Burning. The gunmen reportedly entered the through the hotel's barricade because the car they were driving had diplomatic plates on it, according to the Times. Hostages who were freed from the hotel also said that the attackers spoke English, according to a tweet from Reuters Africa. Security forces also reported that some of the earlier hostages were freed by the attackers because they could recite verses from the Quran, according to the Mirror. U.S. and Malian security forces began entering the hotel to clear hostages hiding on higher floors, according to CNN.

Both French and American citizens were among the hostages taken, according to the Times. At least 138 hostages are still inside of the hotel, according to BuzzFeed. Katarina Hoije, a freelance journalist, told Good Morning America Friday that many Westerners frequent the hotel when they travel to Bamako, "among them the U.N. peacekeeping mission who has staff staying at the hotel regularly," according to ABC News.

Assuming Islamist extremists are behind the attack, it would make sense for them to target a place frequented by Western leaders. The Radisson Blu is U.S.-owned and U.N. diplomats were staying in the hotel. The U.N. has since confirmed that those people were among the hostages who escaped, according to the Mirror. Further, Bamako has recently served as a command center for French forces who are fighting Islamic extremists, according to the Washington Post.

Though ISIS hasn't recently targeted Mali, al Qaeda has been active in the West African country for years, according to the Post. Earlier this year, the group attacked a hotel in central Mali and a military base in the country's south, according to the Post. Though the hotel's patrons weren't only from the West and Europe, attacking it would certainly serve as a symbolic move against them, since the hotel does serve U.N. diplomats who work on peacekeeping missions and counter-terrorism strategies.