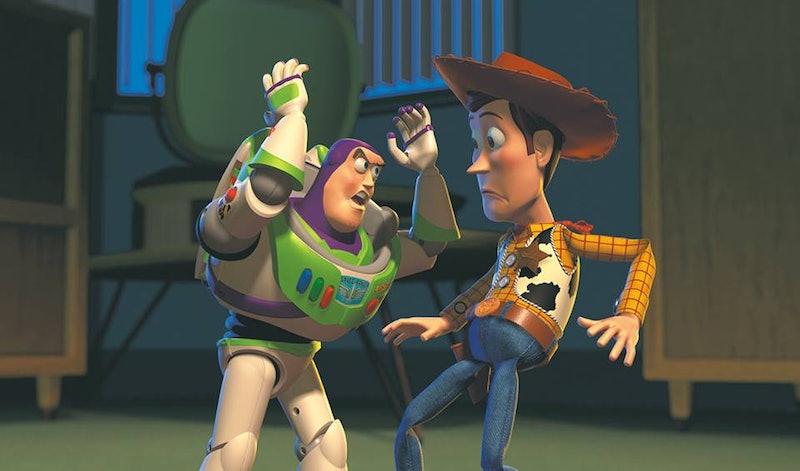 When I first saw Toy Story in 1995, I was completely mystified at the thought of toys coming to life when a kid like myself left the room. I think we all thought/hoped that could happen when we were kids. In honor of the Disney Pixar film's 20th anniversary, I decided it was time for me to rewatch Toy Story as an adult and see if the movie that started it all still tugs at those heart strings. Spoiler alert: It totally does and it made me realize just how far Woody, Buzz Lightyear, and the gang have come since we first met them in the '90s.

For those who need a refresher, Toy Story is the first Disney Pixar movie and it follows the adventures of a boy named Andy's beloved toys. The first film in the beloved franchise introduces the toys we've come to know and love: Woody the cowboy, Buzz Lightyear the intergalactic space man, T-Rex, Little Bow Beep, and so many more. But the Toy Story movies are more than just movies about toys — like most Pixar movies, the film meant for kids also contains themes about jealousy, rivalries, and insecurities about love — and adults can totally relate to that.

Here's what I noticed as I rewatched Toy Story as an adult.

1. Woody Puts Up With So Much

Out of love, of course. He is Andy's favorite after all. And as we learn later, being the favorite comes with great responsibility.

2. It Is Still So Cool When The Toys Come To Life

The entire opening of the movie shows Andy playing with his vision of the toys, but it's so fun to discover Woody and gang's real personalities — and celebrity voices!

3. I Feel Bad That The Toys Constantly Worry About Being Replaced

Woody leads a whole operation for the toys to spy on Andy's birthday party and see which toys he receives as gifts. It makes me think of all those birthdays and Christmas when I received a buttload of toys and proceeded to play with those while ignoring all of my older toys. I think Woody is super overconfident about being Andy's favorite here as well.

4. Woody Comes Off Like Such A Skeptic When Meeting Buzz Lightyear

While all of the other toys are excited to meet Buzz and explore his cool features, Woody totally destroys the illusion about each one like (ugh) such an adult. Woody seems to be wise beyond his years and very well-aware of the fact that he is merely a plaything. But it's cool to see Buzz believe in having a higher purpose — even if it's not entirely true and a little delusional.

5. Boy Does It Suck When Your Best Friend Replaces You

Despite Woody's overconfidence at the beginning of the movie, I've got to feel for Woody here. It really does suck when someone you thought was your best friend up and replaces you with some shiny new fun person, er, toy and seems to forget all about you. Or, in Andy's case, he suddenly becomes the villain to Buzz Lightyear in their play-adventures.

I had totally forgotten this part of the movie and probably with good reason. Sid is a little sociopath! How could he be so mean to all those toys? I mean, I know they're just toys, but I loved my toys. Does he not feel? (I guess not.)

7. Where The Pizza Planet Squeeze Toy Aliens The Minions Of The '90s?

I feel like they could be — and I'd love to see them go up against each other. I wonder who would win.

Claw machines are so hard to master, yet Sid the Sociopath gets not one prize from the Pizza Planet claw, but three — two of which are Buzz Lightyear and Woody. Gulp.

9. This Movie Is All About Buzz & Woody

Toy Story 2 and Toy Story 3 are so epic and involve so many characters. So it's weird to watch the first film and realize it's pretty simple in comparison. The first Toy Story is mostly about the rivalry and jealousy between Woody and Buzz Lightyear — and there's not much of the other characters. It's kinda cool to see that this awesome franchise started with a simple idea of a boy loving two toys and evolved from there.

His toys are so scary! Why does he hate toys so much? (At least his toys turn out to have better intentions than that crazy kid.)

11. It's So Sad When Buzz Realizes He's Just A Toy

That moment when he literally falls from grace (and loses an arm) just breaks my heart. It sucks learning that you're not quite a special snowflake. The Mrs. Nesbitt thing also cracks me up.

12. I Forgot That The Other Toys Turned Against Woody

Due to a misunderstanding, the rest of Andy's room thinks Woody pushed Buzz out the window. Well, Woody was doing some scheming, but because of this, he's gotta earn the toys' trust back in order to escape Sid's room.

13. The Ending Is Still So Cool

"The Big One" rocket. Buzz actually flying with Woody. And Andy being able to love not just Woody, but Buzz, too. Does it get any better than that? (Actually, it does in Toy Story 2 and Toy Story 3.)