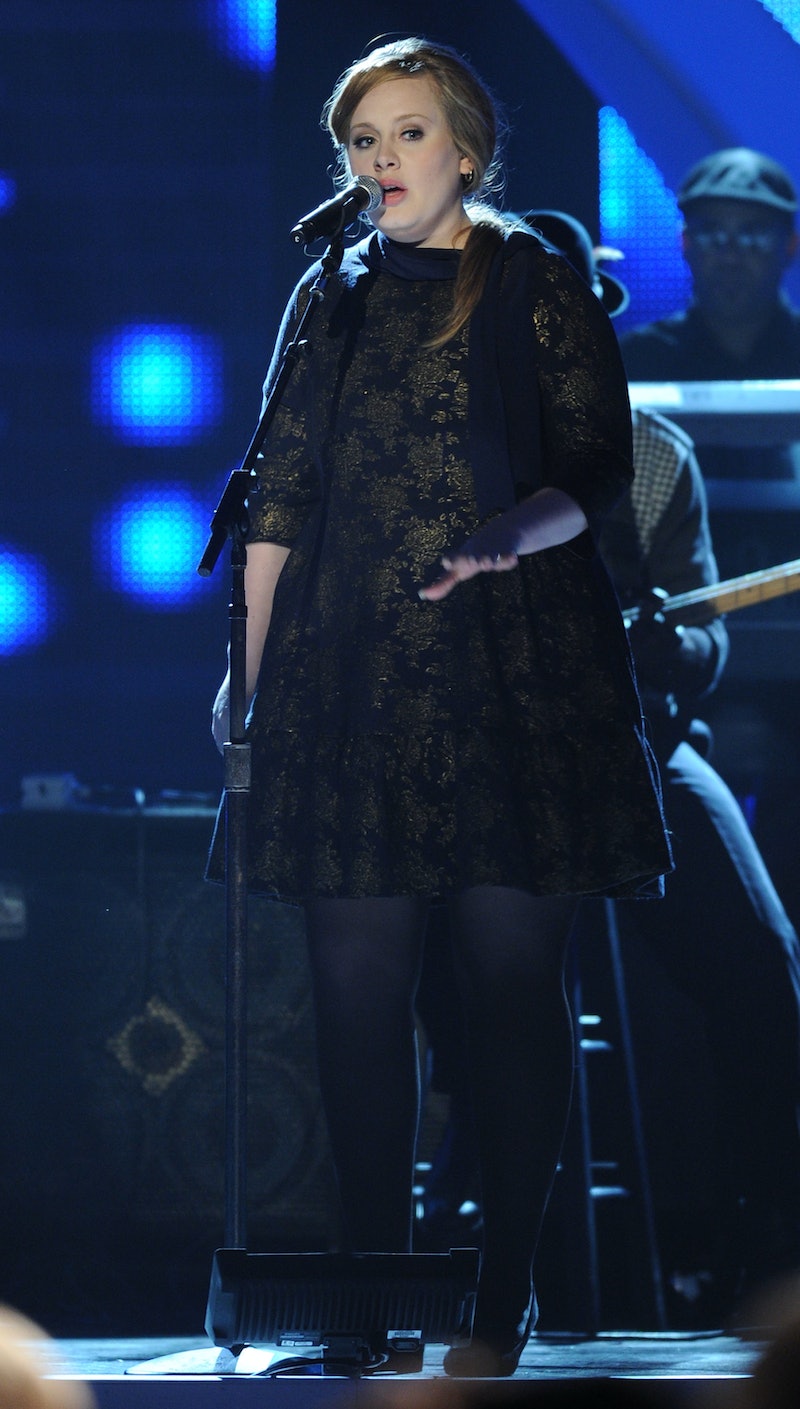 Adele's third studio album was released on Friday, to the tune of millions of eager fans. 25 has caused much anticipation since Adele first made the announcement that new music was coming. Now that we finally have the album, it only seems fair to start figuring out what — or who — each beautiful gem of a track on the album was about. Adele is a fairly private person, so laying out the sordid details of each track doesn't seem likely. Although we may not know the meanings behind each song, there are some common themes throughout Adele's 25 .

In the last four years, the singer has been through a lot of significant life changes. The obvious — and biggest — change is the fact that she is now a mother. When her sophomore album, 21, was released, Adele didn't have her son Angelo. Now that she does, some of her experiences with being a mother have found their way onto her album. In addition, this album gives us a happier Adele, who is over that guy who broke her heart at the age of 21. This is an introspective version of the singer, one that leaves us with a lot of questions about our own humanity. There are so many themes to explore on the album that it's hard to even know where to start.

While a lot of her songs may have references to this new motherhood period of her life, "Sweetest Devotion" is definitely about her son. In an interview with USA Today, Adele confirmed the song was written about Angelo. With lyrics like "the sweetest devotion hit me like an explosion," it's hard not to understand why she took so much time off to spend raising her child. Apart from the lyrics, you can even hear the actual voice of her son at the beginning and end of the track.

Adele's longtime boyfriend, Simon Konecki, is also a major part of her life. Their relationship began in 2011, so the world never got to hear any powerful ballads about their love on 21. While she hasn't confirmed that any songs off the new album are officially about him, the song "The Remedy" is a beautiful love song about withstanding trials together, and "I Miss You" is both beautiful and full of fiery passion.

Of course, with many stable relationships comes the pain from past unstable relationships. Adele has had her fair share of heartbreak, which she doesn't fail to draw from on 25. Her first single from the new album, "Hello," describes the pain of trying to make amends with someone you've wronged, only to be rebuffed. Whoever she is talking about, i'm sure they won't be missing any phone calls from now on.

Of course, "When We Were Young" is the obvious title track to this theme. Not just because of the title, but also because the lyrics really speak to a time in everyone's life when they run into someone they used to know, and, for a second, it brings them back to better times. Whether an old friend or an ex, we've all been there, and Adele captures that moment perfectly in this song.

Sometimes, you have to pick up the pieces of your life and move on. And there is no better moving on music than Adele singing basically any one of her songs. On this album, "All I Ask" wins the award for best breakup song with these lyrics: "I will leave my heart at the door. I won't say a word, they've all been said before. So why don't we just play pretend like we're not scared of what's coming next."

There seem to be a lot of songs that look back on her life so far, and some of her reflections are very sad tales of a life not quite lived to its full potential. There are obvious ones like, "When We Were Young," but there are also the more subtle odes to days of old. For instance, in her song "Million Years," she croons to the lyrics, "I know I'm not the only one that regrets the things they've done. Sometimes I just feel it's only me who regrets the reflection that they see... I feel like my life is flashing by, and all I can do is watch and cry."

You can never go back, but you can always move forward. Adele covers this topic so effortlessly and beautifully throughout her album. It's especially poignant in her song "The River Lea," where she sings, "I can't go back to the river, but it's in my roots, in my veins, in my blood, every heart I used to heal the pain."

Her music is full of so much wise knowledge that there are always lessons to be taken from her art. You can tell that she is in a period of transformation and leaving behind the old to embrace the new. Her newness comes from a stable love, her child, and being content in her identity as a person and a musical artist. The world has been waiting to see what this new journey would bring her. The conclusion? A new hit album.