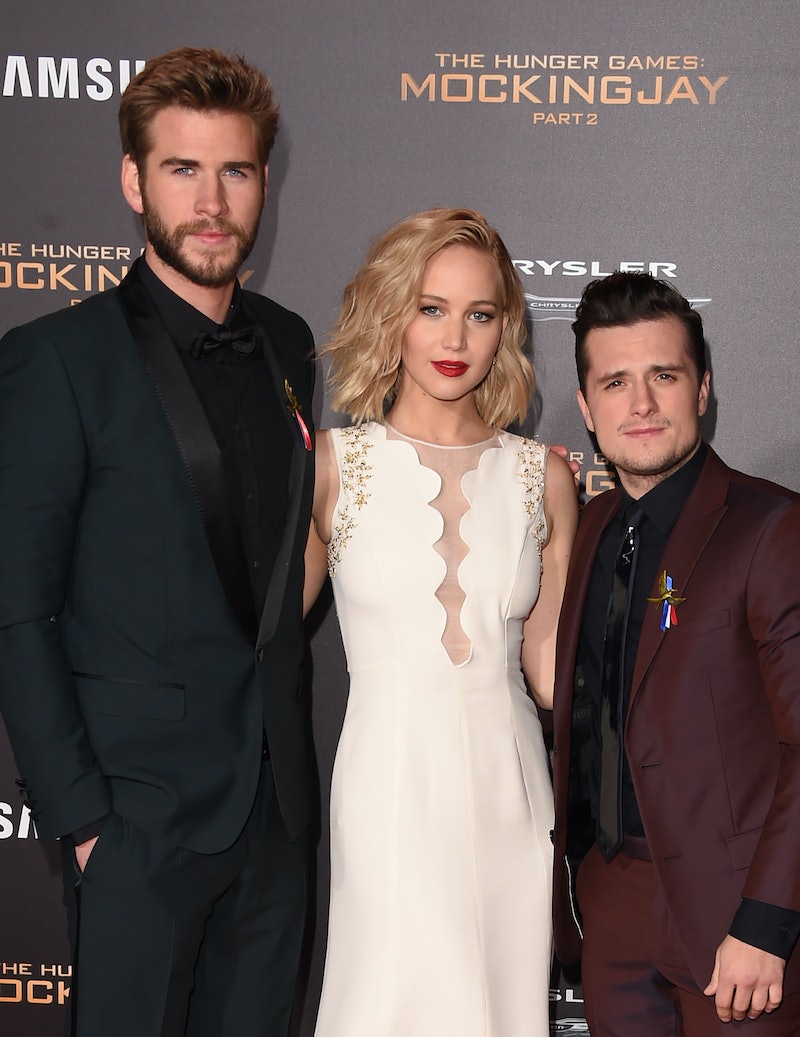 Are you really bad at moving on from fictional worlds and characters? Well, you’re in good company. So am I. In this case, I’m experiencing some major feels now that The Hunger Games saga is officially over. Not that I won’t go and see Mockingjay, Part 2 about five or six more times, because I totally will. But the fact that it’s all over does make me nostalgic. I mean, think about how far we’ve all come since 2012, even though it doesn’t seem all that long ago.

Jennifer Lawrence, Liam Hemsworth, and Josh Hutcherson have sort of grown up along with us fans, haven’t they? I mean, if the photos of their progression both physically and professionally from four years of promoting the films are any indication, the three leads and the rest of the Hunger Games cast have really become the sophisticated adults we probably like to think we are, too. But that doesn’t mean they’ve lost their awesomely silly rapport with one another. There's no doubt this cast has the most collectively lighthearted demeanor and it shines through in years worth of pictures.

Check out 43 of the best Hunger Games cast moments from 2012 to present day below. You know you want to (even though it may make you shed a tear or 12):

1. When They Were Getting The Hang Of Things

2. Proof J. Law Was An Adorable Klutz From The Start

It's in her blood.

3. When They Were Just Little Glam Babies

4. When Prim & Rue Were Super Cute With A Dophin

8. When J. Hutch & J. Law Were Acting A Lot Like Peeta & Katniss On Their Press Tour

10. When The Core Four Were Still New At The Whole Promoting The Hunger Games Thing

So young and naive.

12. When Prez Snow Was Actually Supportive Of Katniss' Crusade

13. When Sam Claflin Finally Graced The Fandom With His Ethereal Presence

How lucky were we, though?

14. When They Were Being *So* Typical

16. When The Trio Totally Rocked It

17. When Finnick, Peeta, & Beetee Were Having A Grand Ol' Time

What was so funny guys?!

18. Another Gratuitous Photo Of The Three Main Squeezes

Why? Because I can and J. Law rocked another insanely gorgeous dress.

19. When The Core Four Slayed

They looked TOO good.

20. When... Whatever Is Happening Here Happened

Is he dancing? Is he falling? Did J. Law push him? (Probably.)

21. When They Really Showed Their Love To One Another

22. When They Looked So Damn Glam

Just go with it.

27. Clearly, This Was Just The Best Red Carpet, Ever

So chic, the lot of them.

29. When They Were Being Goofs

31. And The Fans Were All About The Selfies

34. When Willow Shields Was All Grown Up

It's like just yesterday she was screaming bloody murder in the first few seconds of the Hunger Games. </3

36. When Woody Harrelson & Elizabeth Banks Had A Hayffie Moment

37. When J. Law Looked Like She Was Sniffing Hemsworth's Arm Pit

38. When They All Looked So Very Grown Up

39. When They Gave Us This Beautiful Group Shot

To remember them by.

40. When They Literally Glowed

Be more gorgeous, the three of you. I dare you.

41. When They All Mutually Looked Super In Love With One Another

43. When They Went Out With A Bang

*Shoulder slump* Well, it was great while it lasted, guys.