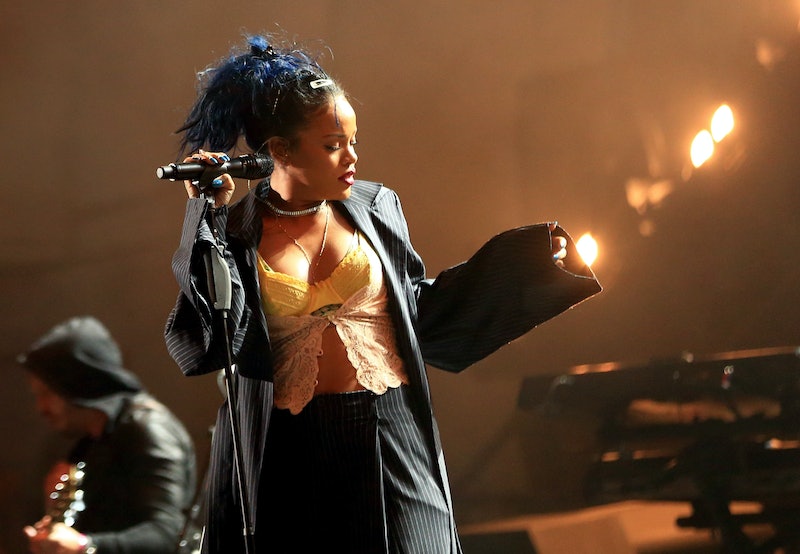 Is it actually happening? Is the premiere of Rihanna's long-awaited new album, ANTI , finally almost upon us? It certainly seems that way. On Thursday, Rihanna launched ANTIdiaRy.com, a mysterious website that appears to have something to do with her forthcoming eighth LP... we just don't know what yet. Billboard reports that the site is a part of Rihanna's new partnership with Samsung, and that more information about the project will be revealed during the American Music Awards (AMAs) on Sun., Nov. 22. Other than that, we don't have very many details! (The 27-year-old global superstar also shared a strange black-and-white video clip on Instagram to promote the project, but unfortunately, it only raises more questions.)

Here's the deal: In order to sign up for ANTIdiaRy, you need to access the site from a mobile device (although, again, what you're signing up for exactly isn't clear). Once you complete the registration process, you'll receive a message that says, "WELCOME — YOU'LL KNOW WHEN IT'S TIME." Uh, OK... but can we get a little hint, though? According to Hits Daily Double (HDD), ANTIdiaRy will "officially launch" at the beginning of the AMAs on Sunday (the show airs at 8 p.m. ET on ABC), and will give fans "exclusive access and information" about ANTI.

What kind of exclusive information? Oh, I don't know... maybe we'll finally find out the album's release date or something! I think that would be a pretty good place to start.

According to HDD, insiders say ANTI will exclusively premiere through music streaming service TIDAL on Fri., Nov. 27 (a.k.a. "Black Friday"), and then roll out to all other retailers a week later on Fri., Dec. 4. If that time line is accurate, we're only one short week away from hearing new music from Queen Rih! However, I'll try not to get my hopes up too high until we receive some sort of official confirmation (and I'd suggest you do the same). In the meantime, be sure to sign up for ANTIdiaRy. It definitely seems as though something big is on the horizon...