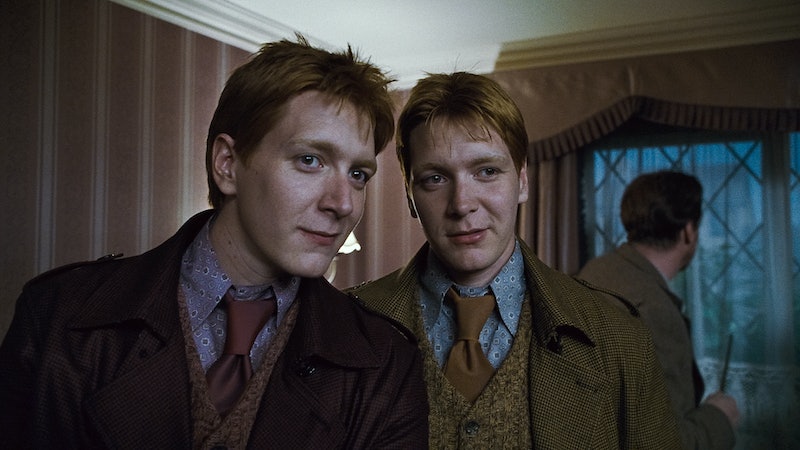 By now we’re all aware that J.K. Rowling was very intentional when naming Harry Potter characters. Their names are taken from myths and constellations (Sirius = “the dog star”), other books (Mrs. Norris is also a Jane Austen character), and old English (“Dumbledore” means “bumblebee,” and Rowling once commented that “because Albus Dumbledore is very fond of music, I always imagined him as sort of humming to himself a lot”). Looking up the origin of Harry Potter names and Rowling’s comments on them will make you fall down a very interesting rabbit hole — who knew the names which now sound so familiar could be so significant?

Of course, Rowling hasn’t commented on all the names in the series, which leaves some etymology up to interpretation — aka fan theories.

This fan theory in particular suggests that Fred and George’s names aren’t myth or constellation, but are actually taken from the pages of a history book.

According to the theory:

All the Weasley names except for Ron are either the names of a British king or queen or an Arthurian name (and Ron brings Harry into the family, and there have been 8 Harry’s on the throne; nine if you are a die-hard Jacobite). King George III was deaf in one ear — and he became king because of the untimely death of Prince Frederick.

If this theory is true, then Fred and George’s names, and the fact that George loses an ear, foreshadows Fred’s death. How could Rowling have done this to us?

So… how much validity does this theory actually have? First of all, George III did have many health issues, which included potential progressive deafness. As for Frederick, it’s true that he had an untimely (and odd) demise: at age 44, he was struck by a ball while playing cricket, which caused an abscess that eventually led to his death. That meant that his son, George III, was the new heir to the throne.

It seems plausible that the twins are named after these famous royals, though it seems doubtful that their personalities were based off either: Prince Frederick and King George III weren't exactly beloved (apparently Frederick’s mother once called him, “the great ass and the greatest liar and the greatest canaille and the greatest beast in the whole world”). The twins from Harry Potter might be a bit more adored.

As for the rest of the Weasley family's names, the theories are pretty awesome about what they reveal... so whether this particular theory is true or not, it's clear Rowling meant business when it got around to naming our fave family.