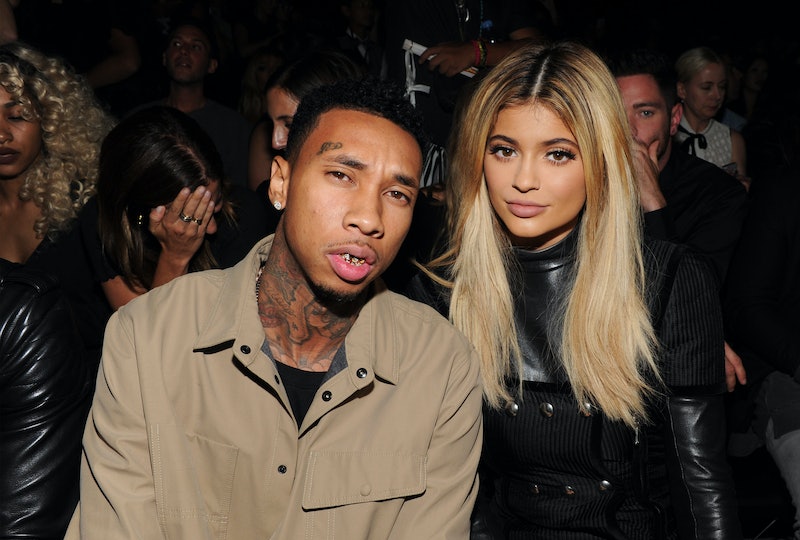 Well, this came out of nowhere. TMZ reports that Kylie Jenner and Tyga have split up. According to TMZ, the decision was "sudden and nasty." The publication's sources claim that the couple broke up on Thursday. A source explained, "It's something Tyga did," but did not give more specific information. TMZ also reports that Kylie's sister Kendall was out at dinner on Thursday and, according to sources, "was upset and had harsh words about Tyga." Bustle has reached out to Kylie's rep for comment, but has not yet heard back.

The news come amid reports that Kylie skipped Tyga's 26th birthday party on Thursday. According to People, Tyga celebrated with friends at Los Angeles restaurant The Nice Guy and later at 1OAK, a popular club. At the time, Kylie was reportedly was returning to the U.S. from a promotional event in Australia.

Both the rapper and the reality star have been active on social media since Thursday, but haven't mentioned anything about a breakup. Kylie posted on Instagram about her dogs, as well as a photo of her latest hair and makeup look (definitely nothing out of the ordinary there), while Tyga recently posted about his new single appropriately titled "Happy Birthday."

As People notes, Kylie recently spoke out about relationships on her website, telling fans, "I'm not afraid to show who I'm dating, but I'm also not about to talk about every little detail of my relationship." So, if we do hear that Kylie and Tyga have split from the 18-year-old herself, there's a chance it won't be until she's dating someone new. Or until it's shown on Keeping Up With the Kardashians, whichever comes first.