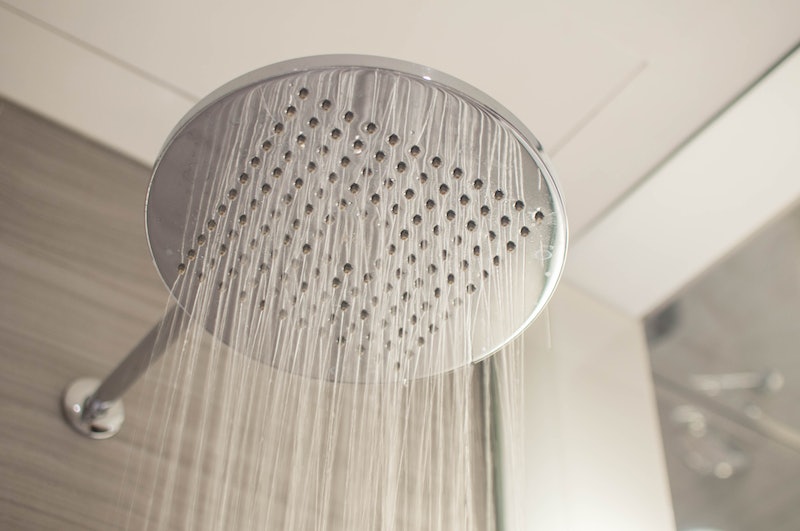 We all know that bathing is important, but just how important? What happens to your body if you don't bathe? Today in the United States, people probably bathe a lot more regularly than they used to — people in Medieval Europe, for instance, don't seem to have been too fond of it at all — but people throughout history have had various ways of keeping clean. Which makes sense, because apparently if you go too long without bathing, some pretty gross stuff starts to happen — not to mention that your chance of catching some disease or other starts to climb. Turns out that getting smelly is just the beginning of your worries.

"For the average person, showering once every day or once every two days is ideal," Dr. Aimee Paik, the medical director for Apostrophe.com, an online dermatology service, tells Bustle. "The exact frequency will depend on your activity level. Showering more often than once daily can dry out your skin leaving it vulnerable to irritation and eczema." Showering less than that can lead to not just being smelly, but an "overgrowth of yeast forms" or dead skin build-up. Yikes!

Still, it's worth keeping those facts and figures in mind while acknowledging what works best for your body. According to some experts, Americans might be a little over-enthusiastic about bathing, probably because advertisers want us to think we have to shower — and thus use their products — every day.

On the other end of the spectrum, though, is the possibility of cutting out baths and showers altogether. A video from HuffPost can help bring to life what that actually looks like. So if you've ever wondered what would happen if you stopped showering for something like a month, fortunately you don't have to experience it to find out. Instead, here are some lessons learned from the HuffPost video. Scroll down to watch the whole thing.

Your body typically has a lot of bacteria on your skin, most of which are actually good for you. This is called your skin microbiome, and like your gut microbiome, the balance of good and bad bacteria helps your body carry out essential functions. Some of them provide useful roles for your skin, and even the otherwise "useless" ones take up space that harmful bacteria might have occupied instead, effectively crowding out the bad germs. But harmful bacteria can still wind up on your skin, and when you don't wash, you increase the chances that those harmful germs will get into your body through your eyes, nose, or mouth — and then get you sick.

In addition to possibly getting sick, some types of bacteria and fungi can cause skin infections, too, especially if you don't periodically wash them away. Staphylococcus bacteria is one that commonly lives on the body, and according to Mayo Clinic, it usually causes no issues. A staph infection can result, though, if the bacteria is able to enter deeper into your system via a cut or other opening, and that can be dangerous.

Have you ever watched Peanuts cartoons and went "same" to PigPen's character? His personal dust storm is a bit of an exaggeration, but by not washing off dirt, sweat, dead skin, or oil by showering, you might find yourself with more acne than before, not to mention looking a little less well-kempt.

Go without washing for long enough and you'll wind up with brown scaly patches on your skin, a condition dermatologists call dermatitis neglecta. The condition is caused, again, by build-up of dead skin, sweat, keratin, and oils that your body naturally produces (and that would otherwise be washed away in the shower).

Body odor is caused when bacteria break down the chemical compounds in sweat and release smelly byproducts. If you don't wash off the sweat (and some of the bacteria), the two compounds will just keep interacting with each other and getting worse over time.

You can watch the full video — and learn some of the dangers of over-bathing as well — below.

More like this
6 Abortion Advocates To Follow On TikTok
By Sara Youngblood Gregory
The Best Underwear For Sensitive Skin, According To A Dermatologist
By Alexa Vazquez
The UK Abortion Laws In 2022, Explained
By Sophie McEvoy
How To Protect Your Digital Privacy If You Need An Abortion Post-Roe
By Kaitlyn Wylde
Get Even More From Bustle — Sign Up For The Newsletter

This article was originally published on November 20, 2015