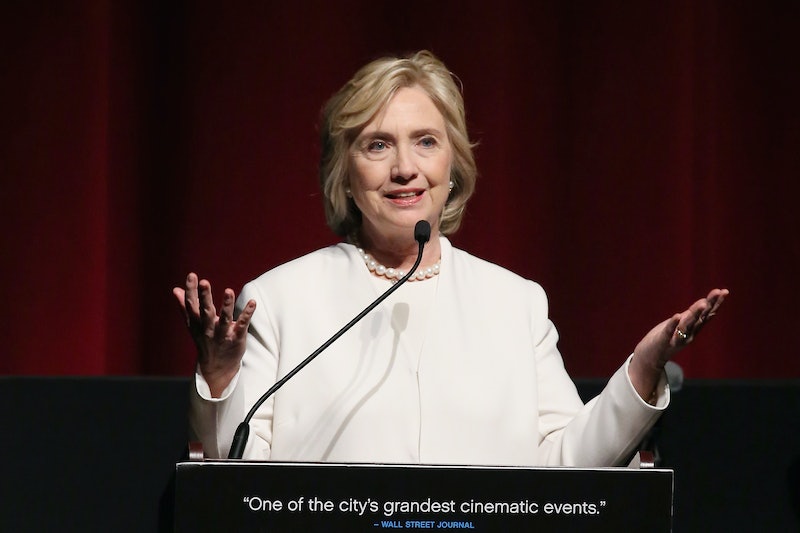 While not the person you would necessarily expect to speak at a documentary premiere, there's an important reason why Hillary Clinton spoke at AOL's MAKERS: Once And For All screening. MAKERS: Once And For All is a documentary about the 1995 Beijing Women's Conference, one of the most important women's rights gatherings in history. The documentary, which features commentary from Clinton herself, as well as from Jane Fonda and Madeleine Albright, was created by MAKERS, a platform started by AOL in 2012 to showcase stories and content created by and about women. Her speech at the event was important, and very relevant to the cause.

The premiere of the documentary took place at the SVA Theater in New York City on Thursday, October 20. Clinton made the opening remarks, a brief speech reflecting on the conference as well as looking toward the future of women's rights. While she praised the work of the conference, in which she took part, and discussed improvements in the gender education gap, maternal mortality, and legal status globally, she kept her eye on all the work that still needs to be done. "There is still a lot to do," she said, "here at home and of course around the world. By watching this film and talking about this film, I hope each of you will think of the ways that you can continue the action that started in Beijing."

For those who are not familiar with the historic conference that is depicted in the documentary, it was a two-week gathering of 47,000 activists in Beijing that provided the foundation of the global Women's Rights Movement and reached an international agreement on women's issues. Clinton, then the First Lady of the United States, was one of many important women in attendance. A remark from a speech she made became famous, and leant the title to this documentary: "If there is one message that echoes forth from this conference, let it be that human rights are women’s rights, and women’s rights are human rights, once and for all."

Not only is this documentary a tribute to an important but often forgotten chapter of modern women's history, but, as Clinton emphasized in her opening remarks, it will hopefully help inspire those who watch it to continue acknowledging the many problems that still exist internationally and to work to make change. As Clinton said at the premiere, "there's so much to be done, and it is important work." The entire documentary is available to watch on MAKERS.com, and there's also information on women's rights, getting involved with related causes, and info for hosting screenings of the documentary. I also recommend checking out MAKERS.com to see lots of other films about inspiring women and women's causes; in the fight for human rights, it's vital that women's voices are heard.