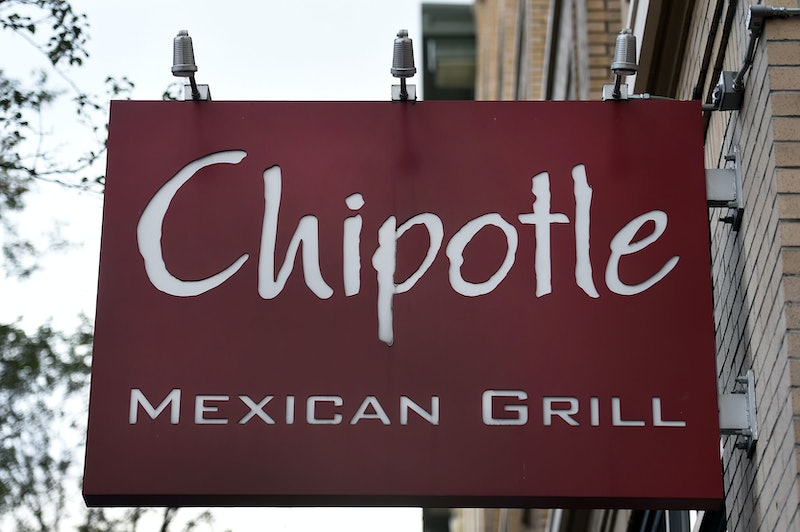 Bad news, folks: An E. coli outbreak has now spread to a total of six states, and there’s a good chance Chipotle is the culprit. The Center for Disease Control announced Thursday that the virus, which had previously been documented in Minnesota, Oregon, and Washington, had infected people in three additional states: California, New York, and Ohio. While the outbreak fortunately hasn’t killed anyone (yet), a total of 43 people have now contracted Chipotle-linked E. coli, raising the question: Is it safe to eat at Chipotle?

The CDC hasn’t yet responded to Bustle’s request for comment on this. However, the agency's website says that it "will advise the public if specific steps are identified that consumers can take to protect themselves" from the outbreak. Nowhere on the corresponding “Advice to Consumers” page does the CDC say that consumers should stay away from Chipotle restaurants. While nobody can ever say for certain that a given restaurant is truly “safe” to eat at, the CDC has not yet told diners to stay away from the restaurant altogether.

That said, the agency’s investigation into the outbreak is ongoing. While the tentative conclusion is that “a common meal item or ingredient served at Chipotle Mexican Grill restaurants in several states is a likely source of this outbreak,” it’s still unclear what ingredient in particular contained the virus.

"The source of the problem appears to have been contained during a period in late October," Chipotle said in a statement. "In response to this incident, Chipotle has taken aggressive steps to make sure its restaurants are as safe as possible. There have been no reported new cases in Washington or Oregon since Chipotle put its remediation plan into effect."

That "remediation plan," the company went on to explain, consisted of "deep cleaning at the restaurants that have been linked to this incident, replacing ingredients in those restaurants, changing food preparation procedures, providing all necessary supply chain data to investigators, and surveying employees to be sure none have had any symptoms of illness." Despite these measures — and despite the fact that less than 50 people total have contracted the virus — Chipotle's stock took a hit after the CDC announced that more states had reported infections, with share prices falling by 10 percent.

That could be because this is the second wave of E. coli outbreaks that have been linked to Chipotle. The first was reported earlier this month, but only affected diners in California and Oregon.