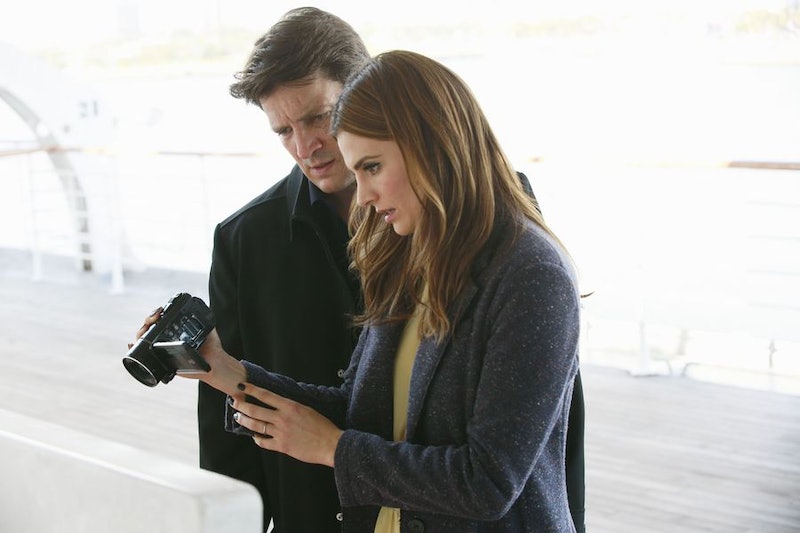 We made it. After a particularly grueling first half of Season 8 of Castle— sorry, I just want Beckett and Castle to be happy together — the show is scheduled to take a break for the holidays so you can spend time with your family and not worry about a crime-ridden city being cared for by a mystery writer. The first half of the season brought us a broken Caskett, if you will, but I'm crossing my fingers for a holiday miracle that when Castle Season 8 returns in the winter, all will be well again. So, how long will fans have to wait until they're reunited with their favorite NYPD team? Luckily, Castle will be back before you know it. Update: TVLine reported that ABC has moved the Castle Season 8 winter premiere date to February 1.

According to TVLine, Castle is set to return January 4, following the premiere of The Bachelor. That's a very quick holiday hiatus, which I'm certainly not complaining about since all of my other shows won't be back until man is on Mars (I'm looking at you TGIT). By the time the show returns, I'm hopeful that all of the little speed bumps that came up in the first half of Season 8 will be ironed out, so we can go back to enjoying the times when everyone worked together, harmoniously.

So, what exactly is there to solve by the time the show returns? I'm glad you asked...

1. Kate & Castle Need To Be Back Together

I understand that Beckett "needs time" and also doesn't want to put Castle at risk while she works on her own case, but come on. This charade has gone on long enough with her taking space. We know these two are end game — they're married, after all — so get them back together and get them solving some murders.

The second most important couple on Castle has also been at odds recently. Ever since Esposito passed the Sergeant's exam, and Ryan didn't, the two have been having some major jealousy and trust issues. Hopefully, they'll take the holidays to realize that they both have the other's back.

3. Kate's Mission Needs To Be Over

At this point, I don't even know what Kate's mission is. She's on and off this "mystery case" so much that it's kind of hard to even care about it anymore.

Alexis has been slaying the bad guys this season now that she is working at her dad's detective agency. She's almost better at detective-ing than Castle is, which is why she totally needs to keep doing her thing and showing her dad that he's got some competition.

Speaking of women who are killing it, Hayley really needs to become an official caseworker with the NYPD, because she is awesome and the show can never have enough female bad asses.

ABC, if you're out there, here's my Christmas list. Thank you in advance.