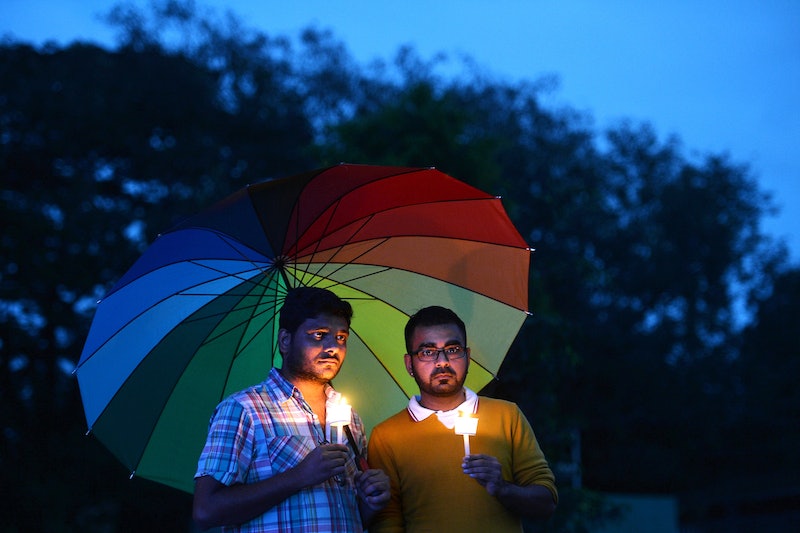 Today marks the 16th annual International Trans Day of Remembrance, an observance founded in 1999 by Gwendolyn Ann Smith in response to the brutal stabbing of activist Rita Hester. Most trans people lost to violence are people of color — and the ongoing memorial list maintained on the ITDR website is far from complete, as it excludes many suicides, as well as cases that flew under the radar for various reasons, like lack of interest from the media. It's dangerous to be transgender, no matter where you are.

But individuals aren't the only threat to safety for transgender people — governments and institutions are, as well. Yesterday, in England, Vicky Thompson was found dead in a men's jail — the transgender woman had threatened to commit suicide if she was sent to a men's facility, but authorities ignored her. At the same time, the United States was telling refugees they were unwanted. These two things may sound like separate issues, but they're not, given the hundreds of transgender people desperately seeking asylum in the United States and elsewhere.

To be trans in many regions of the world is to have a target on your back, especially if you are a woman. Trans women are beaten, raped, abused, and exploited, with many finding it extremely difficult to access employment, housing, health care, and safety. Many are at an extremely high risk of HIV infection, as well as other chronic health problems. Some rely on sex work to meet basic needs or pay for hormones, and in countries where sex work is outlawed, this puts them in even greater danger. Transgender women are often regarded as disposable.

This holds especially true in Latin America, where nearly 1,000 transgender people were killed between 2008 and 2011, with the bulk of those deaths occurring in Brazil and Colombia. Almost all of these deaths resulted in absolutely no legal action, with the perpetrators walking free. Transgender activists in Central and South America report being subject to repeated detention for speaking out, as well as receiving constant threats for their activities as well as their gender identity. Many report abuses by the state, ranging from harassment to extrajudicial executions. Just last month, Argentinian activist Diana Sacayan was murdered. She was the third transgender person to die by violence in that country in October alone.

Deaths of transgender women in Central and South America are often extremely difficult to track, because police and coroners mark their bodies as male and they disappear into a sea of death by violence. Unless they have outspoken advocates and family members who stand up to represent them, their fates pass unnoticed. In the face of such persistent violence, it's not surprising that many transgender people from Central and South America seek refugee status — and in fact, the United Nations has explicitly identified LGBQT people as a population of special risk. The United States is the most natural destination for them, because it's the closest, but it's a hostile one.

Latin American trans women aren't the only ones seeking escape. The Middle East can also be a very dangerous environment for gay and transgender people, with numerous people seeking asylum status on the basis of persecution in countries like Iraq, Iran, and Syria. Tragically, as Daesh induces a growing hatred of refugees from the Middle East, many face discrimination and blocks at the border, which can drive them to desperation. Some resort to human trafficking in an attempt to pass the border illegally — which exposes them to the risk of exploitation — while others may commit suicide in the face of their grim odds.

Applying for asylum is extremely complicated, as applicants must live within the United States while jumping through a number of immigration hoops (including extensive background checks), and they have a one-year filing deadline. Immigrant trans women in the United States face considerable discrimination and hardships — often including discrimination from within their own communities, which may make them reluctant to out themselves in order to seek the necessary legal documentation. If they don't file, or otherwise don't satisfy the state's demands, they face detention and deportation, even if the United States knows that sending them back to their native countries is a death sentence.

Immigration detention in the United States is a massive for-profit industry, as Immigration and Customs Enforcement and the Department of Homeland Security contract out much of their needed services. Transgender women commonly end up either in men's facilities — which puts them at tremendous risk of rape and assault — or in solitary confinement "for their own protection," practices mirrored in domestic prisons. At any given time, roughly 75 trans people, mostly women, are held in immigration detention. Despite their relatively small representation within the detainee population, they account for 20 percent of sexual assault victims in ICE facilities. Transgender women are also typically denied necessary medical treatment, like access to hormones and dilators as well as HIV care, which has proven fatal in at least one case.

In June, ICE announced new guidelines that would require placement of transgender women with other women, rather than with men or in solitary confinement. These guidelines, many women say, aren't being followed. Trans women continue to suffer systemic violence in immigration detention after arriving in a country they thought would shelter them, moving from one violent setting to another instead of finding the refuge they deserve.

This week, critics discussed the fact that proposed immigration policies in both the U.S. and Europe would lead directly to deaths in the Middle East, by keeping people in desperate need of shelter trapped at the border. However, for trans women, this has been a reality for decades, with countries like the U.S. refusing shelter even when applicants demonstrate that returning home could be deadly. Trans women die as a result of our immigration policy, and of similar policies around the world — even as they are trying to flee the violence that puts so many of them on the growing list of trans dead.

As transgender people remember their dead today and cis people wonder what to do, the refugee crisis and the situation with trans women in detention provides an example of concrete action. Advocacy for immigration reform, and aggressive resistance to anti-refugee sentiments, won't just make a difference for thousands of Syrians, Iraqis, Afghanis, and others looking for a place to call home. It will also save the lives of trans women around the world who are seeking what America claims to offer when it says that it welcomes the "huddled masses" — which should include trans women of color who will die without shelter.