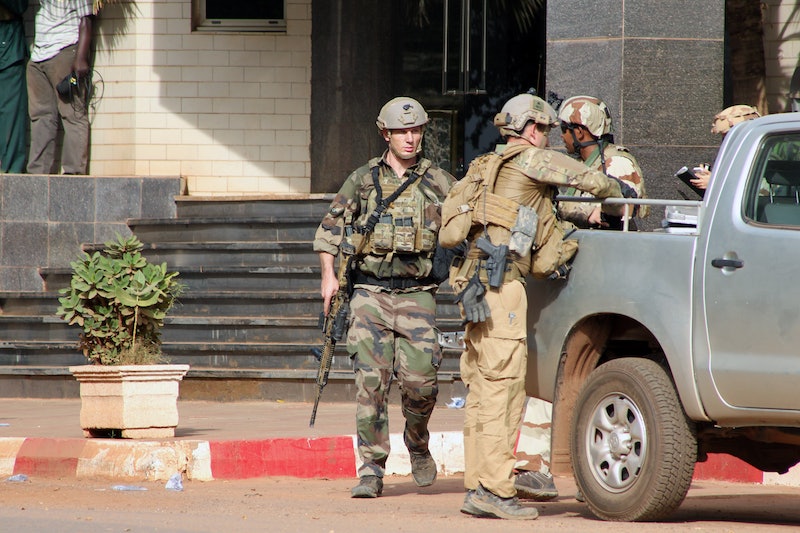 According to multiple sources, an American citizen was killed in the attack on a Mali hotel earlier today. A senior official at the U.S. State Department confirmed the news, according to NPR. The victim's name hasn't been released, nor have any more details about the death.

As many as 27 people were killed on Friday when gunmen stormed the Radisson Blu hotel in Bamako, the capital of Mali, and opened fire into the lobby. According to eyewitness reports, the attackers shouted, "Allahu akbar!" as they were shooting, but also spoke to one another in English. They then took around 170 hostages; the Malian military soon closed off the perimeter of the hotel, and while it's not clear exactly what transpired, two of the attackers were killed, and the White House confirmed later in the day that the attack was over. Though no tally has been officially released, the numbers reported thus far would suggest that around 130 of the hostages were successfully evacuated.

So far, it's unclear who is responsible for the attack. Al Jazeera said that it received a recording asserting that the raid was carried out by the regional affiliate of al Qaeda in conjunction with Al-Mourabitoun, a Malian extremist group, and Al-Mourabitoun later claimed the same. However, this has not been independently confirmed. According to The New York Times, an al Qaeda supporter said that ISIS could "learn a thing or two" from the Malian attack.