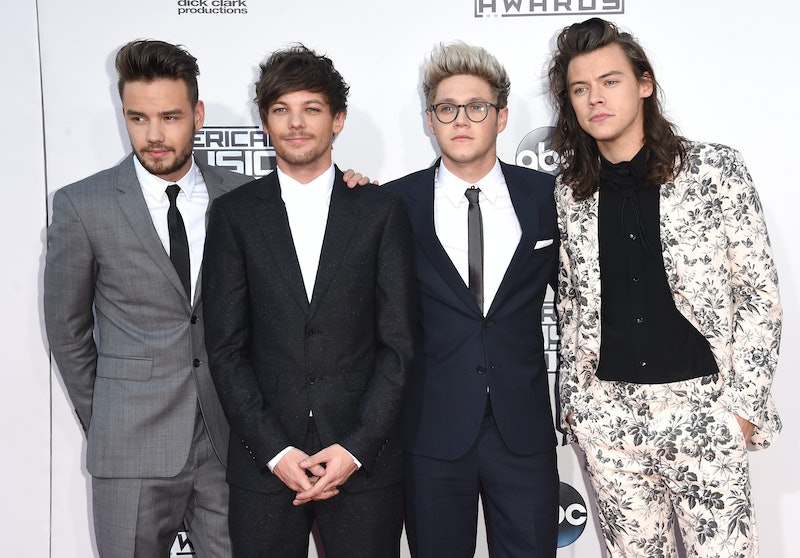 Before they officially go on hiatus, One Direction performed at the 2015 American Music Awards with their latest single "Perfect." Niall Horan, Liam Payne, Harry Styles and Louis Tomlinson are of course no stranger to the AMAs — they've played there three times before — but this was the first time they played since Zayn Malik's departure left them a four-piece.

The rather sexy Made In The A.M. track, co-written by Styles and Tomlinson, has many people wondering if it's about Styles' ex Taylor Swift. But, he's been mum on the subject, instead talking generally about the song to an Australian radio station, saying, "It's not one about thinking through too much, being like, 'Hey, I want to be with you for the rest of my life.' It's like well, you know, 'This could be fun.'"

"Perfect" was the, well, perfect song to play on Sunday, since it recently helped 1D beat the Beatles' record for most top 10 debuts on the Billboard 100 with five. And, it's clear they deserved the record because their performance of "Perfect"was everything.

Last year, One Direction took home three awards from the show, including Artist of the Year; Favorite Duo or Group, Pop/Rock; and Favorite Album, Pop/Rock. This time around, One Direction was looking for a repeat win in the two categories they're up for: Artist of the Year and Favorite Duo or Group, Pop/Rock, the latter of which they already picked up a win for, because they're perfect and their performance was on fire.

More like this
Beyoncé’s New Duet Made Her Mom Cry — & Is A Nod To An Old Destiny’s Child Song
By Grace Wehniainen
Britney Spears’ Lawyer Responds To K-Fed’s Leaked Videos About Their Sons
By Grace Wehniainen
Beyoncé Sent Flowers To “Masterpiece Genius” Madonna After The “BREAK MY SOUL” Remix
By Grace Wehniainen
Lauv Is No Stranger To Taylor Swift, Drake, Ed Sheeran, & Fame
By Alyssa Lapid
Get Even More From Bustle — Sign Up For The Newsletter