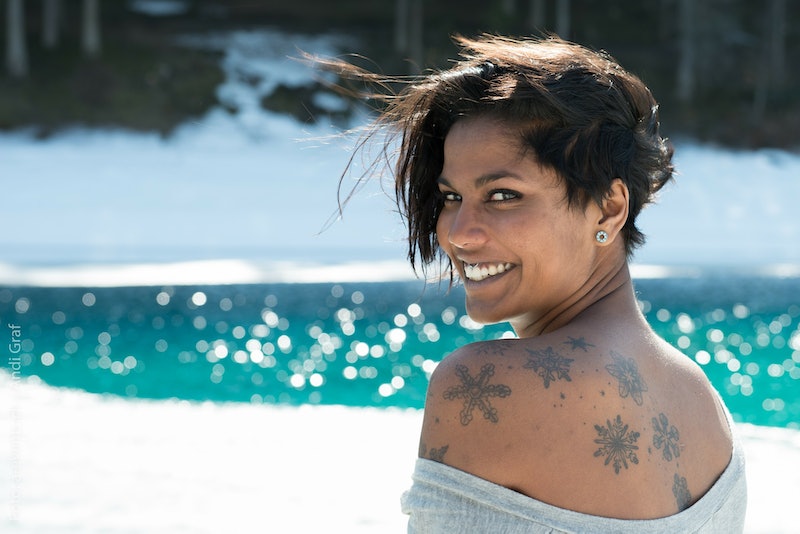 Body decorations and tattoos have been popular for a long time, and people report all sorts of reasons for maintaining their appearances like they do. But actual scientific inquiry can delve deeper into our tattoo motivations, and a new study suggests that women with multiple tattoos have higher self-esteem than those with fewer or none — but they also have more troubled pasts. Sociologist Jerome Koch of Texas Tech University tentatively concludes that tattoos sometimes serve as a coping mechanism for getting past the most difficult periods in life for women.

This finding isn't totally surprising — plenty of people seem to have breakup commemoration tattoos, for instance, or tattoos in recognition of a death or medical event of themselves or others. Some tattoos are chosen rashly and end up needing some tattoo cover-up work, and tattoo removal is on the rise (Koch's other tattoo research indicates that women are twice as likely as men to seek tattoo removal, yikes). But inking oneself remains a popular practice so it's got to be providing some benefits for its users.

There was a darker side to this study, though: the women with four or more tattoos were also much more likely to have had a history of suicide attempts — though they don't become more depressed or suicidal as their tattoo count grows. The researcher therefore hypothesizes that these women are looking for ways to reclaim their traumatic experiences, and perhaps reclaim their own bodies too, from outside forces that shaped and harmed them.

There may be some link between low self-esteem and future suicide attempts, so it's at least possible that tattoo-collecting women are actually succeeding in their attempts at becoming more mentally healthy in the future. But having many tattoos can make it difficult to get or keep jobs, the health effects of tattoos are not well-understood, and men tend to view tattooed women in a negative light.

Of course, whether you choose to get a tattoo or not, there are many ways to boost self-esteem that are worth adding to your arsenal. And while this study is interesting, it's not meant to provide treatment advice — if you're suicidal or suffering from suicidal ideation, you need to seek professional mental health services as soon as possible.

More like this
The Best Underwear For Sensitive Skin, According To A Dermatologist
By Alexa Vazquez
Lenny Kravitz Just Made Toothpaste Sexy
By Caroline Goldfarb
13 Non-Toxic Sunscreens Under £35, So You Can Glow Responsibly
By Lauren Sharkey, Rebecca Fearn and Jessica Morgan
7 Derm-Approved Tricks That'll Help Ease Sunburn Pain
By Paris Giles
Get Even More From Bustle — Sign Up For The Newsletter