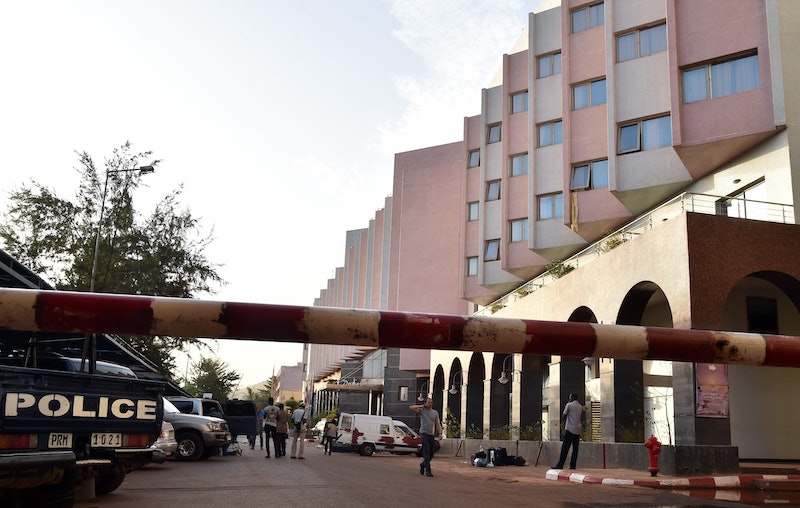 On Friday, in the Malian capital of Bamako, dozens were slain in a siege on the Radisson Blu hotel, yet another scene of terroristic violence which drew international attention and condemnation. At least one American died in the attacks — 41-year-old Anita Datar, a resident of Takoma Park, Maryland who reportedly worked in international development. She wasn't the only American in or around the hotel when the attack began, however, and one of them has described the experience: Terry Kemp, an American survivor of the Mali attacks, spoke with ABC News on Saturday.

Kemp, described by the network as a State Department contractor who'd been in Mali on assignment for more than a month prior to the attack, was on his way out of the hotel when the shooting began. He told the network that he'd been getting in his car when the gunmen opened fire, causing he and a colleague to flee back into the hotel. When inside, Kemp was chased up a flight of stairs by the armed militants — possibly members of an Al Qaeda-affiliated Islamist group called Al-Mourabitoun, which claimed responsibility for the attack — and ultimately dove under a table to hide, where he stayed motionless, expecting to be found and killed.

Here's how he described the chaotic scene, when asked at what point he knew he'd been caught in the middle of a terrorist attack.

Kemp said that the militants started shooting when they entered the room he was hiding in, confused as to his whereabouts. At that point, he said, he assumed he was dead. But mercifully — and somewhat miraculously, from Kemp's perspective — the gunmen apparently couldn't tell where he was hiding, and moved on.

I just knew I was dead. ... And then, they never looked. They were shooting, the shells were hitting me. I don't know why.

Kemp said he the attackers ended up setting the room on fire, and that he waited for it to fill with smoke before fleeing into a nearby kitchen. In all, he was trapped inside the hotel in the midst of the siege for about 90 minutes before being rescued by a team of Regional Security Officers (RSOs), operating under the direction of the U.S. Ambassador in Mali, Paul Folmsbee. At that point, Kemp said, he knew he was going to be alright: "I was blessed. I was in good hands, I didn't worry no more."

According to ABC News, Kemp was one of approximately 20 Americans rescued from the Radisson Blu. Estimates of the total death toll from the attack have varied, with reports of 19 to 20 on the low end, to up to 27 on the high end.