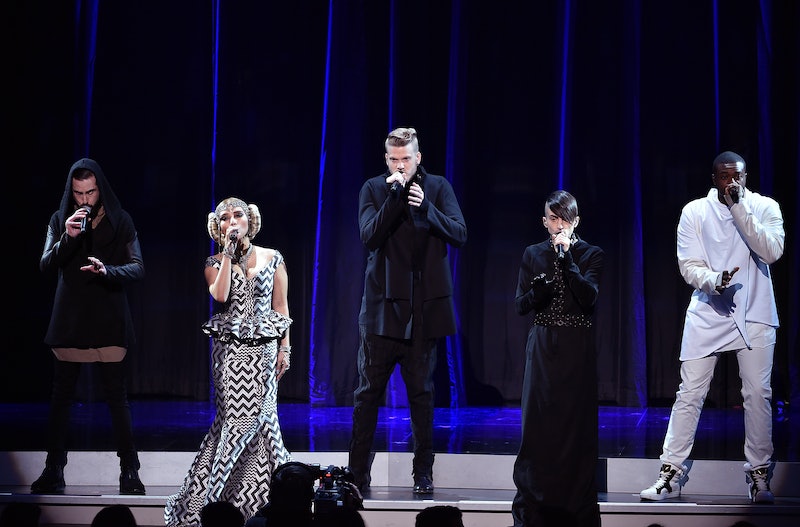 There is probably no theme song more iconic than the main title from the Star Wars series. Whether you're a diehard fan or someone who hasn't even watched all the movies, chances are you'd recognize that catchy track from literally anywhere. With the premiere date of The Force Awakens less than a month away, it was fitting that Pentatonix covered the Star Wars theme at the American Music Awards on Sunday night. The performance was introduced by none other than Han Solo (uh, I mean Harrison Ford), who paid tribute to the song's composer John Williams by noting that "all movie fans know his music." And, to prove it, he played brief clips of the music Williams has composed for a variety of films including E.T., Raiders of the Lost Ark, Jurassic Park, and Schindler's List.

When Pentatonix took the stage, the a capella group was backed by a full symphony orchestra during the performance. There's always tremendous pressure when you're performing a new rendition of a beloved, iconic song — but they totally nailed it. Plus, it certainly didn't hurt that they were dressed as the beloved characters from the movie. (Now that's what I call dedication to your art!)

Pentatonix excels at everything from Beyoncé covers to original compositions, so it's really no surprise that they did justice to John Williams' iconic score. In an interview with Rolling Stone, Kevin Olusola promised that the performance would be "epic" and described it as a true collaboration between Pentatonix and the orchestra. Their rendition of the Star Wars theme song managed to keep all the classic elements about the song that we love, while giving it a new, contemporary spin. They kept the essence of the song, while adding impressive vocals and beatboxing.

The performance is already being lauded as one of the best of the evening:

The force was certainly with Pentatonix during this performance. Is it too late to swap out the title track for The Force Awakens and use their version instead?