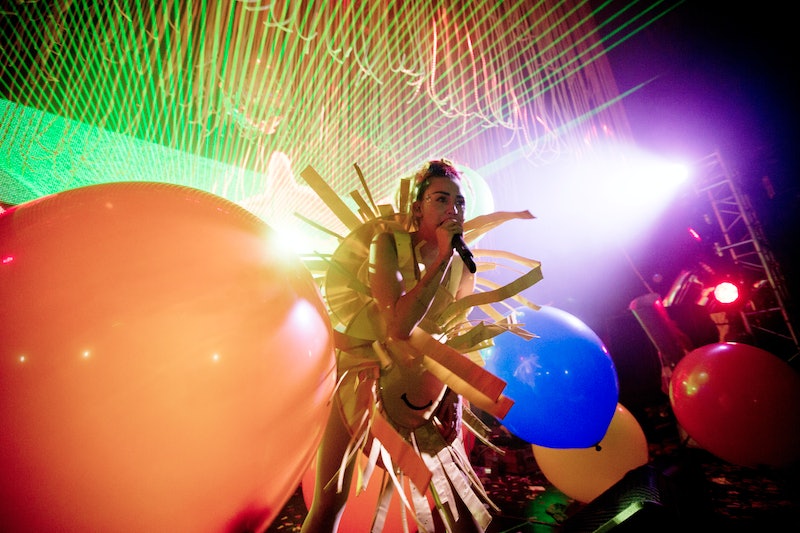 This star's outfits have never not turned heads for as long as we've known her (post-Disney Channel days, that is), and this week she has once again proved she can easily outdo herself. Miley Cyrus rocked a revealing metallic getup with S&M vibes, complete with an enormous strap-on, at her Chicago show this past Thursday, to the horror of conservative news outlets and gossip publications alike. Her outfit is also breast-exposing, but it's hard to tell if they are really Cyrus' breasts, or just elaborate (and lifelike) prosthetics, which People reports they are. You can check out the racy (but totally rad, IMO) photos here. Keep in mind that the images are highly NSFW.

If you're shocked or (like me) delighted, then just wait and see what's in store for us in the near future. The first show of her current tour to promote her new experimental album Miley Cyrus and Her Dead Petz was just the beginning. Last night, Cyrus once again turned heads with her zany outfit lineup at her Detroit show, dressed as a sun, an astronaut, a baby with a bonnet and even a stick of butter. She donned her controversial strap on again, but this time adding a tail and a horn to complete what she described as her "porni-corn" outfit. If nothing else, Cyrus clearly knows how to entertain with her wild and whimsical outfits that seem to transport concert-goers to an entirely different dimension. Her aesthetic is like fashion on acid.

With the pop star being infamous for her scandalous head-turning outfits, I'm sure next to no one is surprised at the wild getups she's rocking on her latest tour. But is undeniable that Cyrus is once again taking it to a new level, and screaming messages of body and sex positivity through these looks. One can only imagine: what's next?

It turns out, Cyrus's love for flaunting her body could be determining the next big move. According to an Instagram post by Wayne Coyne of The Flaming Lips (who is in Cyrus's band currently), she allegedly has a show planned for the future that will reportedly revolve completely around nudity, aiming for perhaps the most controversial "outfit" (or lack thereof) one could wear on stage. According to this caption:

@mileycyrus is planning a show where her, the band (us) and the audience are all COMPLETELY naked with milk (well white stuff that looks like milk) is being being spewed everywhere... It's a video (in the works) for #mileycyrusandherdeadpetz song The Milky Milky Milk...

Cyrus is extreme and a little out there, but she certainly takes fashion risks that are groundbreaking and entirely unique. I mean, who would think to don a gigantic strap-on onstage? And better yet, who would have the fearlessness to actually execute it? Cyrus is pop culture's go-to for shock value, destigmatizing sexuality, and taking style risks that could even jeopardize her career. And honestly, that's what makes her so badass.

Here are some of the other wild outfits that have made an appearance on her tour so far:

I'm not really sure what kind of statement Cyrus is trying to make dressed as a pad of butter, but it sure makes for a fun Halloween costume idea.

Okay, this one seems pretty creepy to me considering how highly sexualized the rest of her show is. But I'm sure she had some kind of creative vision/explanation for it... right?

Very cheery, very "Happy Hippie" vibes. And like the Sun, Cyrus is basically at the center of the pop culture solar system thanks to weird creative choices like this.

Cyrus's next show is this coming Friday in D.C., and will be performing at NYC's Terminal 5 on Saturday. What will she wear? Will the porni-corn make another appearance, with even more interesting additions? We'll find out.