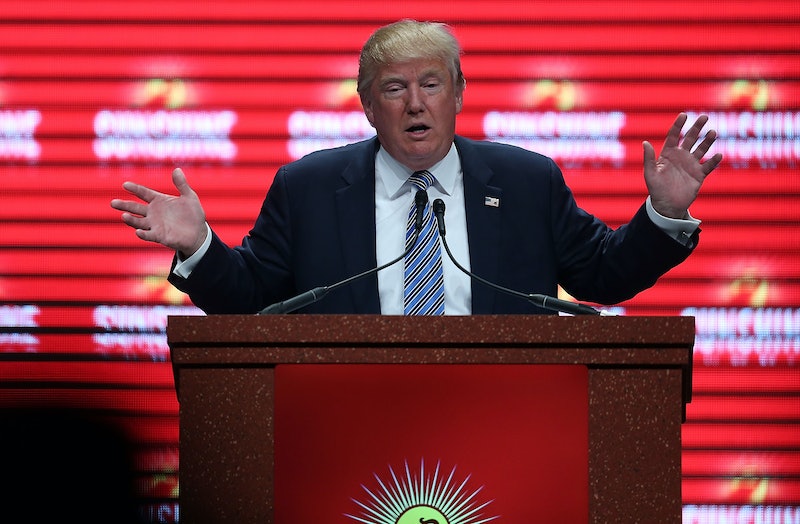 Prominent Black Lives Matter activist Mercutio Southall Jr. started shouting "Black Lives Matter!" at one of Donald Trump's campaign rallies Saturday. At one point, Southall alleged that Trump supporters started telling him to go home and yelled racial slurs like the N word and "monkey," according to AL.com. Then, eight or nine Trump supporters surrounded Southall and at least one of them began punching, kicking, and choking him. A Washington Post reporter in the crowd said a woman could be heard yelling, "Don't choke him!" repeatedly. Disturbingly, Trump defended his supporters who beat the protester on a Fox News Channel appearance Sunday morning, according to Esquire.

Southall told AL.com that he attended the rally because Birmingham is 75 percent black, and, given the rhetoric Trump has used to disparage blacks and Latinos, Southall said he wanted Trump "to know he's not welcome here." One of Southall's fellow activists began recording the protest — a common technique for the group — when a Trump supporter allegedly knocked the phone being used to record out of the activist's hand. That's when Southall said other Trump supporters joined in, yelling racial slurs that included the N-word. Trump paused the rally and said to his security team, "Get him the hell out of here, will you, please?" as several white men appeared to be kicking and punching Southall, according to the Post, which cited CNN's video footage of the rally.

When Southall was escorted out, Trump noted how he dealt with the protester differently than Democratic candidate and Vermont Sen. Bernie Sanders did, according to the Post:

Trump defended his supporters' actions, suggesting "maybe [the man] should have been roughed up," according to Vox:

Southall told AL.com that he would support a police investigation and criminal charges against the people who attacked him, though it's unclear if he's filed any such charges.

During the same rally Saturday, Trump said he wants certain mosques heavily surveilled and that he'd "strongly consider" shutting down mosques in the U.S. altogether, according to CNN. He also repeatedly cited false rumors that Muslims in New Jersey cheered when the World Trade Center fell in the Sept. 11 attacks.

In a speech at Georgetown University last week, Sanders said that Trump's surveillance propositions shouldn't be allowed in something as serious as the presidential race:

People should not be using the political process to inject racism into the debate.

Regardless of the circumstances, it's at least clear that presidential candidates should never defend their supporters who resort to violence because a protester was exercising his First Amendment right.