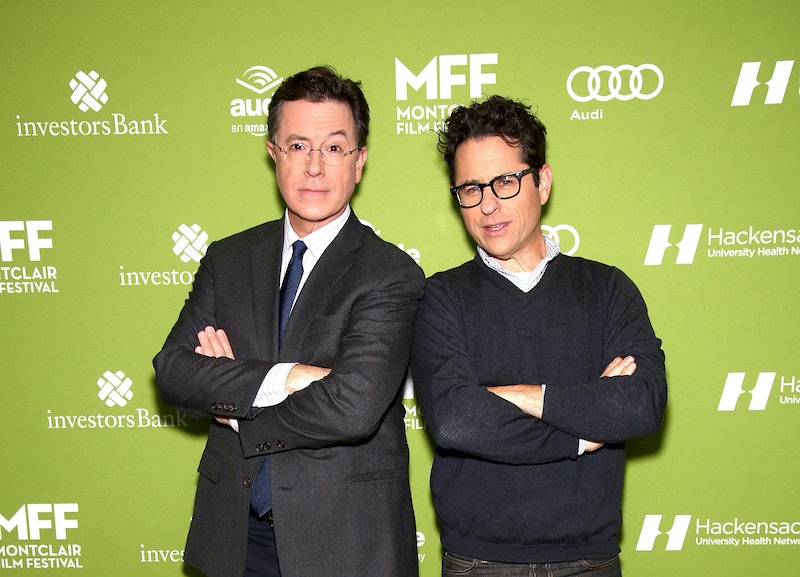 What a meeting of the minds: On Saturday, late-night funnyman and Lord of the Rings savant Stephen Colbert sat down with director J.J. Abrams for a question and answer sesh at the Montclair Film Festival's Celebrity Nerd-Off. Colbert, who is a resident of Montclair and is on the advisory board of the film festival, played host to the Star Wars and Star Trek director, and during the Nerd-Off, the pair discussed their work, influences, and of course, Abrams talked about Star Wars: The Force Awakens.

There was also plenty of non-Star Wars talk during the event. Colbert revealed that Jennifer Garner (star of J.J. Abrams' Alias) was formally his children's babysitter, and the pair also discussed Abrams short-lived acting career, which included an appearance in the film Six Degrees of Separation. They also revealed how the director tried to fixed the scientific inaccuracies in Armageddon, but Jerry Bruckheimer was reportedly like, "Um, no — I like it like that." Colbert also suggested which of J.R.R. Tolkien's stories Abrams should bring to the big screen (answer: "Akallabêth" from The Silmarillion). Duh.

But with the release of Star Wars: The Force Awakens just around the corner, Abrams gave the audience what it wanted and talked at length about a galaxy far, far away. Here's what we learned:

The Final Mix Is Complete

Abrams revealed that he had completed the final mixes for Star Wars: A Force Awakens earlier that day at 2:30 a.m. He said he has six very small but important things left to do, but essentially the film is now complete.

He'll Be Glad When The Project Ends

When asked by an audience member if he wanted the Star Wars project to "just be over," Abrams honestly responded:

The truth is working on this movie for nearly three years, it has been like living with the greatest roommate in history for too long. It’s time for him to get his own place. It’s been great and I can’t tell you how much I want him to get out into the world and meet other people because we know each other really well.

Don't worry, we all want the new Star Wars to be released into the world as much as you do, J.J.!

Abrams also said,"Star Wars is bigger than all of us. So I’m thrilled beyond words (to be involved) and terrified more than I can say.” It makes sense that he's so nervous — this is the most important film to be released in decades, IMO (I don't count Episodes I-III).

In response to a fan question, Abrams admitted that he could take on six Ewoks if prompted in a fight. I would pay good money to see this happen.

He Has A Favorite Alien

Abrams revealed that his favorite non-starring alien is the smiling one in the cantina scene from Star Wars: A New Hope. What a strange and unusual choice, Mr. Abrams.

And He Shared The Films' Biggest Mistake

When asked, "What is the stupidest thing that the Jedi decided in any of the first six films?" by a fan, Abrams was stumped by the question. Colbert stepped in and responded, "To train Anakin." Well played Mr. Colbert.

J.J. Abrams is well aware of the critiques he has gotten over his excessive use of lens flares in the past. Abrams used 721 lens flares in the first Star Trek and 826 in Star Trek: Into Darkness. He promised fans and Stephen Colbert that there will be significantly less lens flares in Star Wars. Explained the director, “I’ve allowed lens flares to take a backseat [in Star Wars]. Every time there could be a flare, Roger [Guyett, ILM’s visual effects supervisor,] would tell me, ‘These are not the flares you are looking for.’” LOL, this Roger guy sounds like a real hoot.

While Abrams brought the 2009 Star Trek reboot to screen, he was not a fan of the original series. In contrast, host Stephen Colbert was a huge fan of Star Trek growing up. Very, very interesting.

They Discussed The Force

When Colbert asked Abrams what "the force" meant to him as a kid, the filmmaker responded, "It was a nondenominational, powerful idea that was very important to us, in this film, to bring back." And that's why I feel that these new Star Wars films are safe in his hands.

There's A First Time For Everything

Abrams revealed that the Nerd-Off was the first time he had seen the full-length Star Wars: The Force Awakens trailer in front of an audience. Hopefully he got the reaction he was hoping for!

So good news: Abrams is as excited about giving us a new Star Wars as we are to receive it. But the bad news is that there is still a month before the film's release. Ugh, December cannot come soon enough.