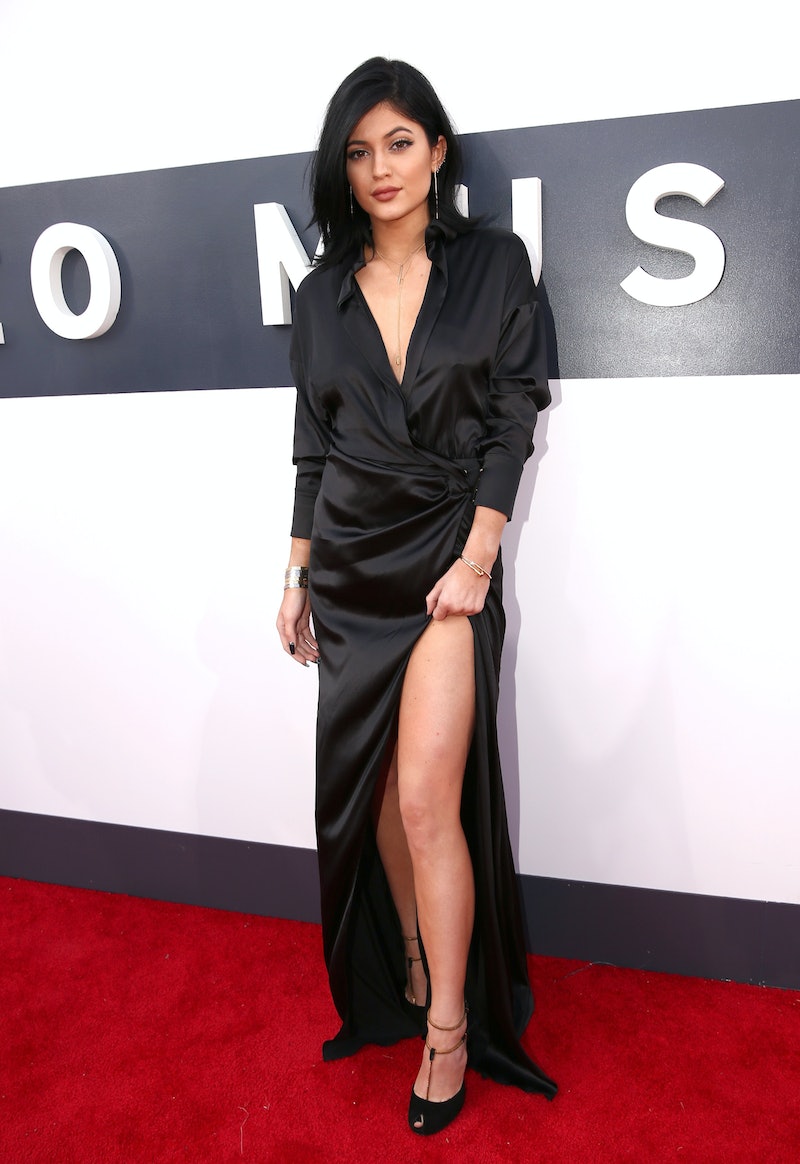 Breakups are tough for anyone, and this celebrity handled her alleged split like may of us mere mortals would — by dancing and drinking the pain away with some of her nearest and dearest. Kylie Jenner wore an all-black outfit for an evening out in Hollywood on Friday, her first appearance since rumors of a breakup with boyfriend Tyga began circulating. According to the Daily Mail, she was seen partying at the Nice Guy, where she held her 18th birthday party, and Hyde nightclub.

Aside from my green-eyed goblin over her lust-worthy Friday-night plans, what really struck me about this news is how consistently amazing the littlest Jenner sister is at packing a mean sartorial punch — and in the most casual of all-black ensembles. Choosing a pair of distressed look cropped skinnies with a long-sleeved black bodysuit, her trusty leather jacket, and a pair of super-comfy Vans SK8-Hi sneakers, Jenner looked the epitome of edgy yet effortless cool.

Of course, thanks to Jenner's Snapchat featuring her and Tyga lounging cosily together with the caption "Everyone needs to chill," rumors are now flying thick and fast that the celebrity pair have kissed and made up — and the truth is anybody's guess.

Jenner was spotted in another all-black outfit this weekend, pairing black leggings with a striking "Let The Devil Dress In Black" slogan T-shirt. The all-black color scheme was only broken up by her love of trainers — this time, a pair of Adidas ZX Flux in White.

After catching a sneaky peek at Kendall and Kylie Jenner's second collaboration with Topshop (available in U.S. Topshop locations December 4), I get the impression that Jenner would love us to join her and wear black all winter. And seeing as it's such a practical, stain-concealing color, why the heck not? If you fancy partaking in the all-black escapades, simply take a flick through some of Jenner's previous all-ebony ensembles below for style inspo!

Hailing straight from her very own Kendall and Kylie collection, Jenner donned this classic black halter dress with cutout side panelling as she went sailing in Sydney. She proves that classic LBDs are just as suitable for sun-deck lounging as they are for black-tie soirées.

Jenner chose a black long-sleeved Steven Khalil jumpsuit with plunging V-neckline and statement fringed leather belt by YVY to dine out at the Nice Guy with Tyga last Thursday. The black jumpsuit is a nice alternative to the traditional LBD, while the belt's long black fringing adds a tassle-tastic finishing touch.

The day after her sister Kendall walked the Victoria's Secret catwalk show, the Jenner pair were spotted on a sisterly shopping trip. Of course, there's mere mortal casual and then there's Kardashian casual — and with Jenner's tracksuit by Moschino and her Uggs, the star nailed off-duty cool without letting her style pulse go cold.

4. Running Errands In All Black And Air Force Ones

Jenner chose sleek black leather-look leggings, a matching leather bomber jacket and dark sunglasses for running errands around her hometown a couple of weeks ago — strikingly paired with brilliant white Air Force Ones.

This studded Alexander Wang dress with velvet panelling, and strappy Gianvito Rossi Portfolio heels, was a seriously style-savvy look for Jenner, as she celebrated Caitlyn Jenner's birthday with a quiet lunch in Woodland Hills. It's also concrete proof that studs aren't just for cowboys.

Jenner's eye-catchingly unique Steve Fabrikant toggle-embellished dress, thigh-high lace-up boots and draping woolen trench coat offered a vampish edge to a walk through New York — and proved that when it comes to wearing black, there really are no limits to how stylish you can look.