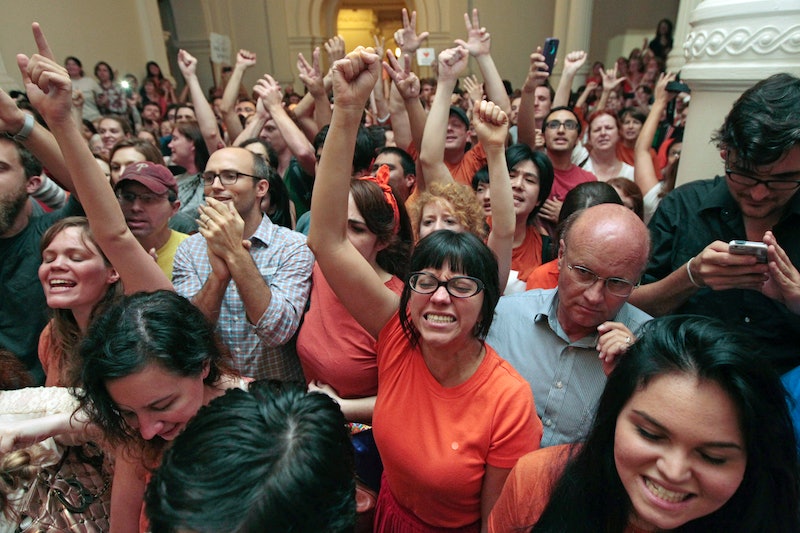 Since I first heard about the Supreme Court case of Eleanor McCullen, one question has floated to the front of my mind again and again: If McCullen had been waiting for me when I left an abortion clinic one grey October morning, what words would have passed between us? McCullen is an anti-abortion protestor who claims that a 35-foot buffer zone outside a Planned Parenthood clinic violates her free speech rights. But back when I was a 22-year-old jobless graduate getting an abortion, she might have been any other protestor.

After I'd been sentenced to an ultrasound scan that would leave an unidentified cylindrical image burnished on my mind (it was a clump of cells but I still somberly recognized them as vital ones); after I'd watched a woman carried out from a surgical abortion sob until she was purple, and implore the doctor to describe to her 'what it looked like;' and after I'd thanked my luck for being able to have a legal, funded abortion, what would have passed between me and McCullen as I stepped outside? Perhaps McCullen and I would have found ourselves in a debate about when a good time to talk about my choice might be. My short (and most likely, impolite) answer would have been: definitely not now.

If you consider yourself an anti-censorship feminist as I do — equally passionate about free speech and abortion rights — then the question of how to balance someone's right to express their opposition to abortion with someone's right not only to seek an abortion, but to seek one in peace, is worth serious contemplation.

What's more, if you've had an abortion yourself, then you probably have firsthand understanding of just what a compassionate act it is to afford a woman privacy in its aftermath.

Presuming you don't have to contend with a paternalistic male relative who will judge you for being a 'slut,' the person you most do not want to have to explain yourself to, in my experience, turns out to be a kindly mother figure. She is the very archetype you are effectively rejecting when you seek an abortion.

Compassion doesn't make for a sound legal justification as to why Eleanor McCullen shouldn't be allowed closer access to the Boston Planned Parenthood clinic. But there is validity to the idea that women should have access to abortion without having to undergo close-range harassment.

In 2000, the Supreme Court upheld a Colorado ruling stating that the First Amendment right to free speech was not violated by a law imposing an eight-foot distance between a person entering a health-care facility (including one seeking an abortion) and someone wishing to protest their entry, distribute literature to them, or offer education or counseling (McCullen's self-appointed mandate). A similar ruling, partially informed by a 1994 shooting at another Boston Planned Parenthood clinic, was made in Massachusetts in 2007. When the eight-foot 'bubble' was found too difficult to enforce, the compromise became the 35-foot buffer zone.

Bear in mind, McCullen is still allowed to talk to women visiting the clinic once they leave the 35-foot buffer zone. Her right to free speech is very much intact. Besides, abortion clinics aren't the only places with free speech buffer zones — polling stations and funeral services have them too. As Martha Coakley, the Attorney General bringing the prosecution against McCullen, says of the current 35-foot buffer zone policy, “This law is access balanced with speech balanced with public safety. It has worked extremely well.”

As we all know, abortion in the United States remains one of the most controversial moral issues: 40 years on from Roe v Wade, 47 percent still think abortion is morally wrong. But the thing is, whether you are pro-life or pro-choice, abortion is never, ever the easy option. Just as death of a loved one forces you to contemplate your own mortality, so abortion confronts you with your own procreativity. No matter how feminist your core values, or how liberal and tolerant your upbringing, there is an enormous sense of having let people down when you find yourself contending with an unwanted pregnancy. You find yourself thinking about what it would be to pass on your genes, even if you are convinced you will never have children (as I always have been for as long as I can remember). And if the guy that got you pregnant is a loving, committed partner who would make a great dad (as mine was), the decision is actually even more morally complicated.

I have no doubt that McCullen, who prides herself on the number of women she's managed to talk out of having an abortion, believes she is doing a special and compassionate thing. And yet the way she has defended herself — as a petite, plump, motherly septuagenarian who could not pose any threat — could not be more disingenuous.

Presuming you don't have to contend with a paternalistic male relative who will judge you for being a 'slut,' the person you most do not want to have to explain yourself to, in my experience, turns out to be a kindly mother figure. She is the very archetype you are effectively rejecting when you seek an abortion.

That gives someone like McCullen a considerable amount of power. Could someone have talked me out of my abortion? I don't think so. Could someone more vulnerable than I was — confused, alone, and looking for a maternal steer — be seduced by McCullen's fleeting expression of care? Quite possibly. Expressing your opinion is one thing. Encroaching on another's legal right to make a choice you happen to disagree with is quite another. And as for exercising your influence at a moment of another's emotional weakness? Why, that sounds like an abuse of power to me.