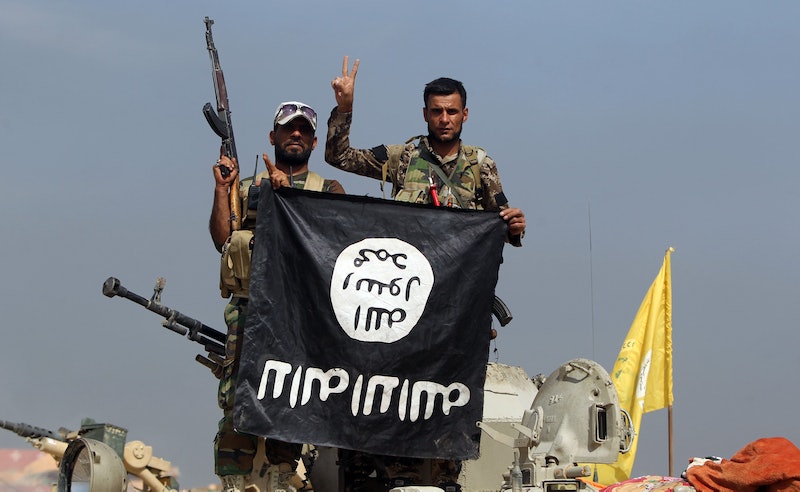 ISIS, the terrorist group also known as the Islamic State, has tried to legitimize its existence by declaring a territory — what it calls a "caliphate" — and raising a flag in the name of its extremist beliefs. The caliphate remains geographically isolated, limited to small parts of northern Iraq and Syria currently, but the black flag has become recognizable as a symbol of the terrorist group around the world. In fact, ISIS' flag may have been designed to appeal to a wider Muslim audience.

ISIS' flag features white text on a black background, along with a white circle with black text inside of it. The coloring of the flag itself gives it an intimidating appearance. No globally-recognized state uses a flag that is solely black and white — and probably for good reason, because it looks awfully gloomy.

The message on the flag isn't nearly as intimidating, except for the fact that, you know, it's being proclaimed by an extremist terrorist group. The text follows a fundamental Muslim belief. It reads, "No god but God" and "Mohammed is the Messenger of God." These words are what millions of Muslims around the world believe, and they shouldn't be associated with terrorism by any means. Unfortunately, ISIS has used them on its flag, perhaps in an attempt to make the flag seem applicable to Muslims in general.

ISIS' flag, which was designed by the group in 2006, appears to be symbolic. The flag is black because several records of the Prophet Mohammad's words reference black flags. These records are known as Hadiths, and they are second only to the Quran in Muslim teaching. The text at the top is intentionally rough around the edges to evoke the history that is associated with religious texts and the teachings of Muhammad.

In fact, ISIS isn't the first extremist group to use a black flag — and some believe that the group has kept the meaning of the flag intentionally vague in order to increase the chances that Muslims around the world find it relevant. For instance, The Atlantic reported back in September that a man in New Jersey who flew the flag outside his house mistakenly thought that it was a symbol of Islam in general. According to the story, he thought that the flag had only recently gotten a negative connotation because of its association with ISIS. That might be true — variations of a black flag have been flown by Muslim groups throughout history, according to experts — but they've almost always been flown in a jihadist or militaristic context.

Regardless of its historical context, ISIS' flag looks downright intimidating — and not just because of the machine guns and devastation that often surround its flight. For this reason, it's especially important to understand the difference between the fundamental beliefs of the Muslim community — like those written on the black flag — and the extremist beliefs of jihadist terrorists.