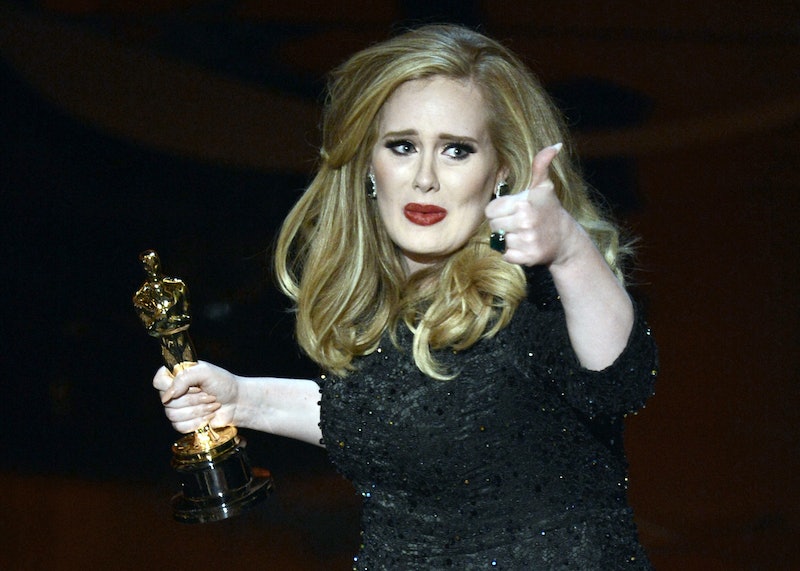 I need you to sit down and steady your breathing, because I'm about to give you a gift beyond all your wildest dreams: Adele wants to remix the Drake song "Hotline Bling." That's right everybody, somebody up there in the sky heard the prayers you didn't even know you were sending out, and your music mom wants to work with your music dad. We've got a regular celebrity Parent Trap on our hands, except that we're not looking to get Adele and Drake married to each other — just their voices romantically co-mingling on a track. AKA the dream.

And, even though it's a dream that I personally didn't know I was allowed to be drifting into, it's apparently one that Adele has quietly been working toward on her own, as she told eTalk in a recent interview that she has her eye on "Hotline Bling" for a tasty little remix. Yum.

I had a drink like three weeks ago [with] my best friends, in fact it was to celebrate ‘Hello'. And I was off my face because I don’t really drink anymore, and they’ve got video of me dancing to [‘Hotline Bling’] on a coffee table as well. I really want us to do an official remix. I love Drake. I love Drake so much.

This is honestly such great news that I don't even know how to cope with it. My understanding is that, if Adele says something aloud, it becomes the law, so it's only a matter of time before we get our remixed due. It's also my understanding, however, that, in order to get permission to remix the song of a peer, you have to provide one of your own for them to remix in exchange (shut up, this is real, don't burst my bubble). So I came up with a list of seven Adele songs that Drake should remix in return.

This one's a gimme, because it could pass for a Drake song already, with that low, murky sound, and the hip hop beat. Make it happen!

I can already hear it in my head — a rap break of Drake talking about what specific rumors he's heard about himself would slot in perfectly.

It would be a great chance for Drake to show off those pipes that I know he's hiding under all that bravado.

Drake has so many songs about ex-lovers and regret that this one is a natural fit.

Drake on an urgent ballad? Where do I sign?

This song is about where Adele is from, so I'd love to hear it intertwined with some Drake lyrics about where he's from. I mean, we've been waiting long enough for Views From The 6 that we deserve something like this.

These are just my top choices, but, honestly, I'm open to anything and everything that Drake and Adele want to put out together. Anything in addition to "Hotline Bling" is just icing on the cake, so let's start with that and then take it from there