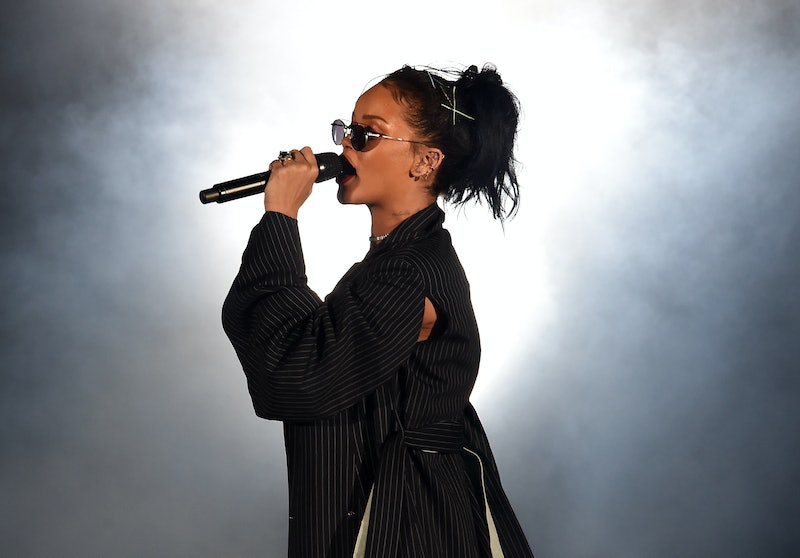 After a string of mysterious announcements surrounding her new album over the past few months, Rihanna has still not released ANTI, the pop star's highly anticipated eighth album. The fact that there has not been an album released did not stop Rihanna from announcing a world tour on Monday, and I couldn't be more excited. The tour will kick off in February 2016 in San Diego and head to a slew of major U.S. cities like New York, Atlanta, Chicago, Philadelphia, and Miami. Riri will also play more than 20 shows throughout Europe next summer, including performances in Amsterdam, Paris, Milan and London. Tickets for the long awaited tour will go on sale Dec. 3 on Live Nation. Openers for the tour have also been announced, and include The Weeknd and Big Sean for the European leg of the tour, and Travis Scott for the North American dates.

If it seems like forever since there was a new Rihanna album, that's because it kind of was. Unapologetic came out in 2011, the same year that Adele's 21 debuted. It's been nearly a full year since the singer released her first single from the album, "FourFiveSeconds," a collaboration with Paul McCartney and Kanye West. She's only released two other tracks from ANTI — the mega-popular "B*tch Better Have My Money," which came out in March, and "American Oxygen," which came out in April. This fueled speculation that the album would come out last summer, but, sadly, it did not. So, we've all been left, bereft and alone and confused and longing for more Riri music — and she heard our pleas, dropping this world tour news in lieu of an album release date.

The new album is rumored to drop within the next few weeks, maybe as soon as Nov. 27 on Tidal (which would be super cool if anyone used Tidal). She launched a website ANTIDiaRy.com this week, but, so far, it's been devoid of any clues about the album's release. Kanye West and Jay-Z have both been reassuring fans for about a year now that the album is coming and that it's going to be amazing. Having poured so much time and energy into the forthcoming album — Miranda July wrote in an October interview with the pop star that she works on the album every night — it's sure to be one of the artist's very best works. Here's hoping that Rihanna makes Christmas come early, and release ANTI before the year is out.

Check out the tour dates below.