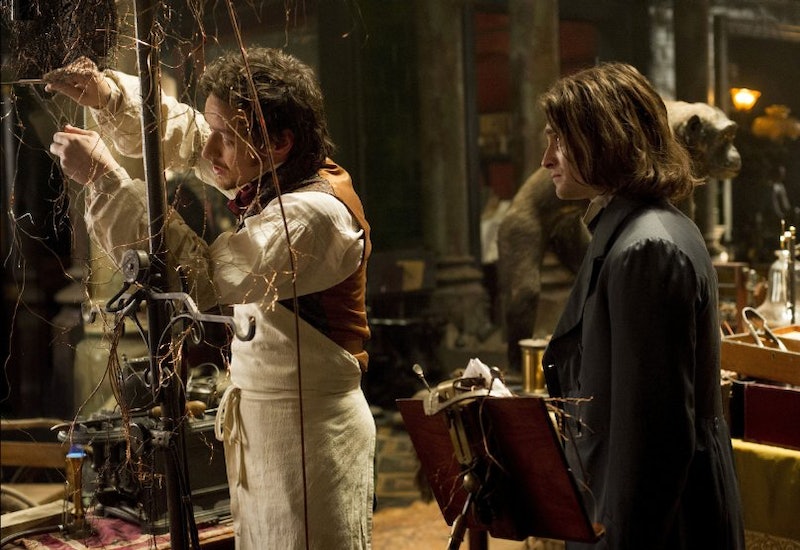 Like a little hybrid of Sherlock Holmes and Crimson Peak, the new film Victor Frankenstein examines Mary Shelley's myth of the industrial revolution through the lens of the famed scientist's (James McAvoy) assistant Igor (Daniel Radcliffe). It reframes the novel as a kind of action-hero story, in which Frankenstein and Igor venture around England stealing body parts and assembling them into a viable — and, it turns out, violent — creature they eventually bring to life with a Back to the Future-worthy electric shock. And though (spoiler alert!) Mary Shelley's 1818 novel Frankenstein famously ends with the death of the eponymous scientist, Hollywood's penchant for reanimating stories with franchise potential is perhaps even more famous. So will Victor Frankenstein have a sequel? It's not out of the question.

A reversal: In Frankenstein 1970, Boris Karloff plays the Doctor, rather than his monster.

Never one to be excluded from a pop culture moment, Andy Warhol created his own Frankenstein adaptation. Its original title Flesh for Frankenstein has been replaced by "Andy Warhol's Frankenstein" as Warhol has become an increasingly immortal cultural touchstone.

In which Sting (yes, that Sting, of The Police and "Fields of Gold" and so much more) plays Dr. Frankenstein. He creates a female mate for the monster, but because she's physically perfect, she rejects the monster's advances and a love triangle between the "Bride," the monster, and Frankenstein ensues.

Kenneth Branagh directs and stars in this Frankenstein adaptation, with Robert De Niro as his jilted monster. When Frankenstein decries his horrible creation, the monster swears revenge on his creator. John Cleese and Helena Bonham Carter also appear.

Though Hotel Transylvania is actually about a family of vampires who own a hotel, it also proves how deeply the Frankenstein myth has penetrated horror, from classic films to contemporary animations. Frankenstein's monster is one of the underworld denizens who checks into the hotel during the film.

Frankenstein (1931), The Curse of Frankenstein (1957), and Hotel Transylvania (2012) have each spawned their own successors. Others simply pursue the tradition set forth by Mary Shelley in her 1818 novel. Still others entirely revamp the myth, examining what Frankenstein might look like in different times periods and social contexts. Victor Frankenstein, campy and B-movie inspired as it might be, actually fits in perfectly amid this canon — and that gives it even more sequel potential.