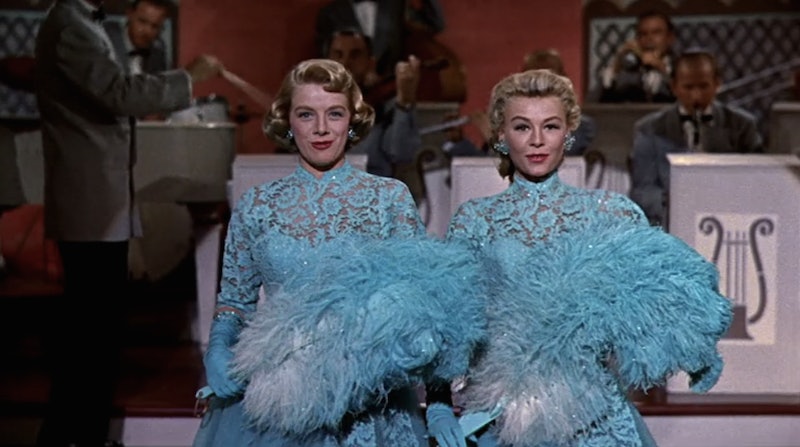 The first time I ever saw White Christmas it was in an old movie theater with snow falling down outside, covering the Jersey shore with fresh powder. I was immediately swept away by the songs, the costuming, the old-fashioned everything, and, naturally, the Haynes sisters. What starts out with a power play by Judy (Vera-Ellen) to get ahead in showbiz turns into a whirlwind Vermont adventure as her and Betty (Rosemary Clooney) fall in love, put on a show, and place emphasis on the importance of sisterhood. Wait, double-take: could White Christmas be a feminist film in disguise?

Well, I mean... not entirely. For the most part it's about Bob Wallace and Phil Davis' bid to keep their former army General's inn open with a dynamite act. It's also made in 1954, so you know, that. Regardless, I decided to watch the old-time Christmas classic and re-examine if there was some hidden moments of female empowerment. Turns out when you use a fine tooth comb on the movie, you could find plenty of positives beyond the all the incessant talk of love and marriage.

So humor me as we compile all the borderline feminist moments from the most delightful Christmas film, White Christmas.

1. Judy, From Start To Finish, Is The One To Take Initiative, Initially With The Haynes' Career.

She's the one to forge a letter to Wallace and Davis in order to bolster their career. Betty calls her out on it and asks her why.

2. The Entire Premise Of "Sisters" Is All About The Bold Concept About Sisters Before Misters. Except For That One Line.

"Lord help the sister who comes between me and my man" is a little catty, right? Like, we should be skeptic? Here is the thing, it's proceeded by the like, "Lord help the mister that comes between me and my sister" which fortifies their bond as supportive women. So the other line, while it may sound like it puts dicks before chicks, is maybe more about establishing your independence and making your own romantic choices regardless of what other people think.

Or maybe not, because the entire movie is about Judy meddling in Betty's love life. Regardless, "Sisters" is a fire track.

3. Incidentally, Betty Comes To Judy's Defense When Bob Accuses Judy Of Having "An Angle."

Betty doesn't really approve of Judy's forged letter herself, but she won't have Mr. Wallace accusing her sister of larceny. "I don't like your inference," she shoots at him, before deciding, "As the chance of us meeting again is extremely remote, I don't think it's important to go on arguing."

4. Everything Phil Davis Has To Do In "The Best Things That Happen While You're Dancing" Judy Does In High Heels.

5. The Haynes Sisters Haven't Paid Their Landlord Over A Burnt Rug Because They Believe In Justice... And Saving $200.

There's even an arrest warrant on their head and the two of them have already snuck out their bags. Raging against the machine.

6. Betty Initially Refuses Wallace And Davis' Help To Take Care Of The Situation, So To Speak.

"We're practically strangers," she says. It's like when you refuse to have a guy you a drink because you're a strong independent woman, but then when he insists you're like, "Yeah, whatever, it's a free drink."

7. They Do, However, Insist That They'll Pay Them Back.

I don't know if it ever happens (probably no), it's just nice to think that they aren't entirely damsels-in-distress-ing here.

8. Enter Emma, The Real HBIC Of The Inn.

Also a master of nosiness, able to read the insides of letters like a master spy.

9. Emma Boldly Embraces Her Sexuality By Kissing Both Leading Men With Zero Shame.

10. The Entire "Mandy" Number Really Pushes Judy Back Into The Spotlight.

The song is about rushing to marry a girl name Mandy, however Judy, in the implied guise of "Mandy," is practically resistant to the advances of the male dancers.

11. They Haynes Sisters Routinely Embrace The Right To Wear Make-Up To Bed.

They actually both see their love interests immediately after this scene. Even still.

12. Betty Is Also Embracing Her Sexuality By Kissing Bob Wallace.

At different intervals of the film ladies are talking to other ladies, yet it always tapers off into some sort of Wallace-And-Davis chat. I'm not sure if it counts in the long run. E for effort, tho.

14. Judy, Once Again, Proves To Be A Cunning Schemer.

Her end-of-the-day motives are a little bit unclear, to be honest. It's not certain if she wants Betty with Bob so she can establish her own independence or if she thinks this matchmaking scheme will bring her closer to Phil, or if it's both, and rich husbands for all. Whatever the case may be, she's a crafty chick who's clearly calling the shots.

Phil doesn't even know how to deal right now.

16. The General Is All Like, "I Think You And Bob Need To Talk This Out" And Betty's Like, "This is None Of Your Effing Business, General."

No, her exact words are, "No, General, this is a private war. Don't do anything." At least she's calling the shots.

17. And Then She Pretty Much Leaves Bob In The Dust.

"No, honestly, we're good, I just have to go now, it was great meeting you, byyyyyeeeee."

18. Later On Bob Shows Up At Her Show And Even Though That Sounds Highly Traumatic She Slays It.

She's through with love, the song details. But wait, there's more!

19. The General Says He's Going To Make His Own Decisions And Emma Smacks Him Down Like The Hand Of God.

"I got along in the army without you," he says, trying to reestablish his dominance.

20. "Gee, I Wish I Was Back In The Army" Has The Ladies In Uniform Instead Of As Nurses Or Some Such.

Which is a small thing, since they talk primarily about how the army was really the best place for romance. I mean, I don't know what war you're fighting in, but...

Also, can we just take a second and look at Bob and Betty's embrace? Has he never hugged a woman before? It's just bizarre.

21. And At The End Of The Day, Everyone Is Wearing The Same Ridiculous Santa Outfit.

Oh, well. It was worth the rewatch. And if you feel like tuning into White Christmas, for whatever reason, feel free to head over to Netflix ASAP!